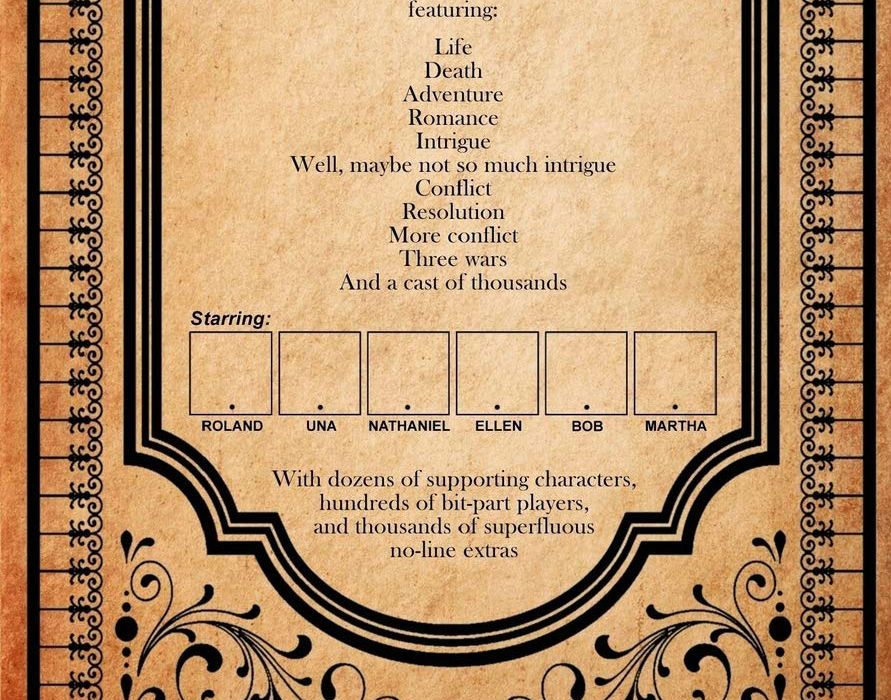 Roland Gethers is insignificant. The last child of too many to count, even his name was an afterthought. His ambitions stifled by a serious lack of education, he coasts through a life in the mines and the army, fighting in the Boar War and First World War. His many kids, that he had with his wife, Una, were as underwhelming as him. His long spanning life last from 1860-1949, some of the most historically significant periods in history, yet Roland managed little impact on anything. Roland Gethers is, after all, just a dot in his world. 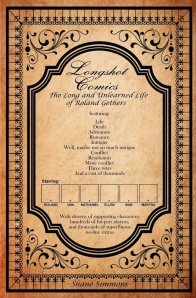 Cover by Shane Simmons
Written & Illustrated by Shane Simmons
The legendary epic-minimalistic graphic novel is back in print for its 25th anniversary! Told in an unprecedented format of 3840 panels in a single comic book, The Long and Unlearned Life of Roland Gethers tells the tale of a Welsh coal-mining family through the highs and lows of the British Empire, the Victorian era, and both World Wars.
With every character depicted as a distant dot, the bare-bones artwork lends itself to subtle visual humour, and opens the story up to a world of rich character development and savagely witty dialogue.
Featured in international museum exhibits, discussed in academic texts, and presented in lectures about sequential storytelling and character design, Longshot Comics has remained a cult favourite through a quarter century of multiple formats, editions, and translations.

In the twenty-five years since its publication as an 80-page minicomic, Shane Simmons’s first of three “Longshot Comics” has been published in multiple languages and formats. While its page count isn’t high, “The Long and Unlearned Life of Roland Gethers” is not a quick read, every page has a perfect forty panel grid, in which the characters only appear as dots at the bottom of each panel, and dialogue dominates. It is almost like reading a script for a play, each panel is a line.

It still remains comics, the panels create a beat structure, and the geography of the dots along the panel’s base speaks to dynamics between the characters. While, this is a cry against visual dynamism in comics, Simmons simplifies the basic properties of what comics is (beats separated into sequential panels), it remains committed to the visual. What makes all three “Longshot Comics” interesting is the tension between an instinct towards minimalism and the necessary shape of a page of comics.

The five by eight grid is a strange one. It’s not one you see often; it would be hard to use in a more traditional comic, because it is so dense. People working in comics will sometimes talk about the page, or even just a row on the page, act as a smaller version of the act structure of a story. There are arguments for five act structures, and arguments for eight, but Simmons kind of ignores those. Scenes take however they want, or need, ending abruptly, with seemingly little thought for where they sit on the page. And I don’t mean this as a criticism, it fits with the books aims and with Roland’s character. The grid is not about beat structure, it’s the constant, inescapable pressing forward of time. The grid and clock provide us structure, but they don’t care about what we do with it.

This sounds very serious but it’s where Simmons pulls a lot of humour from. It’s the awkwardness and ignorance of a whole life that defines “Roland Gethers.” From the beginning, Simmons takes fire at the mundane absurdity of a life. The book opens with Roland’s birth. The doctor arriving at the house having forgot to bring anything to ease Roland’s mother’s pain, at first advising her not to dwell on the pain, before giving her a bullet to bite down on. The gunpowder in the bullet goes off, abruptly killing the Mother. It is definitely a dark humour. It’s one where people with power are willfully neglectful, and ignorant, while their less powerful counterparts mimic that willful ignorance. Later in the book, when Roland is working in a mine, there is talk of unionising but Roland dismisses it. Roland’s life is not great, and there are was he could make it better, but he refuses to take any opportunity to improve it. His life is long and unlearned.

The shape of the world is an unchanging cage that Roland is too small  to see for what it is. We can laugh at his idiocy, we can see all forty panels, but he is just a dot compared to them. It’s an absurd work for an absurd world. The back cover, rather than give a blurb for the story, shows a ‘making of’ section, claiming that every character dot is drawn in meticulous detail that we cannot see because it is so zoomed out. Likewise, it claims the lettering was done by a group of Italian monks on 12×8 canvas, before being reduced to the small size of the book. We can look at Roland from afar as an absurd idiot, but maybe we miss some detail, nuance, in that little dot of ink. Either way, it’s still absurd, and Roland doesn’t learn anything in “The Long and Unlearned Life of Roland Gethers.”