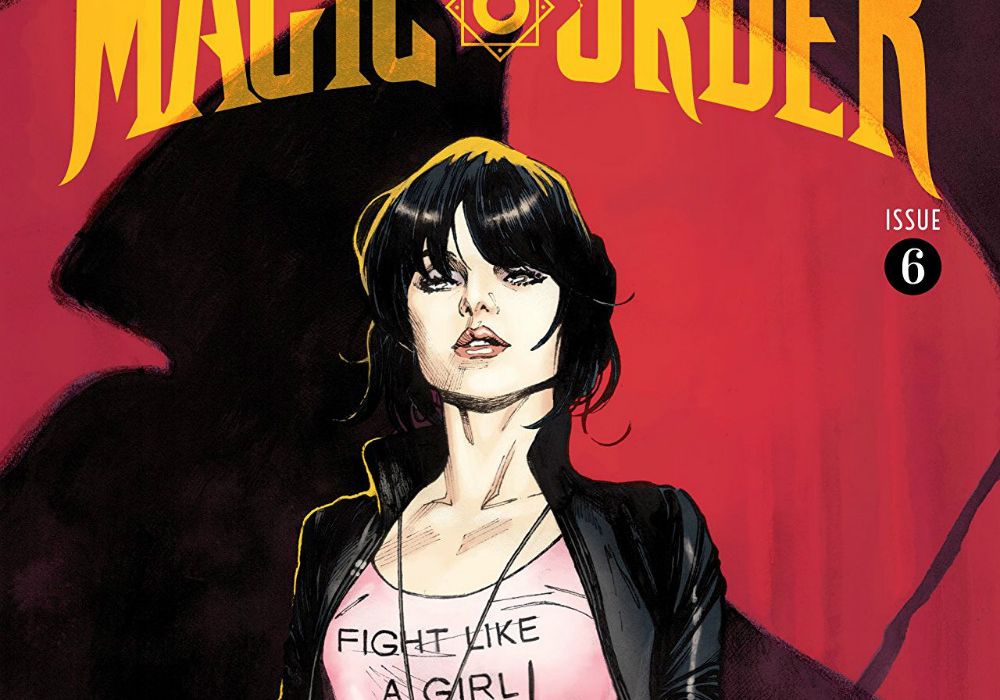 With “The Magic Order” #6, Mark Millar and Oliver Coipel bring Netflix’s first comic book series to its conclusion. Is this final issue able to tie the plot of this miniseries into a nice bow, or does the issue end up a tangle of twists and unclear character motivations? Find out in our review. But be warned, there’s both magic, and spoilers after the break. 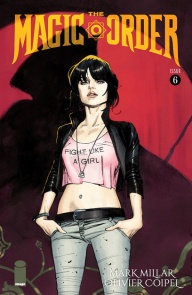 Written by Mark Millar
Illustrated by Oliver Coipel
Colored by Dave Stweart
Lettered by Peter Doherty
This explosive miniseries climax is a high-octane magical battle of good versus evil, as the remaining Magic Order wizards make a last stand against Madame Albany and the forces of darkness. Family bonds are tested, blood is spilled, and black magic threatens life as we know it.

I want to talk about Coipel, and the rest of the art teams work right out of the gate with this review, because I have nothing but good things to say about how “The Magic Order” #6 looks. Coipel’s action is dynamic and exciting. The way that he frames his panels and scenes perfectly ramp up tension in this issue and can make even the moments where characters are standing around talking to one another feel almost as exciting as the moments where they are flying through the air, shooting magic at one another.

“The Magic Order” #6 is a really stylish book. With this series, Oliver Coipel has created a way of portraying magic that is equally grounded and grimy, while still feeling out of this world and magical. It’s a fine line to walk, creating a portrayal of magic that feels like it can still exist in the real world. But Coipel renders fights and magical battles makes gives this series a grounding in reality, even while everything around it is fantastic.

Dave Stewart’s moody colors help create this grounding. Throughout most of this issue, Coipel doesn’t actually draw much in the way of backgrounds, but Stewart is able to give every location in this issue a sense of place through his coloring. Then there are moments where these background colors drop out, leaving characters standing in a panel of all white. I don’t know if this is a decision that came from Stewart, Coipel or even Mark Millar’s script, but once every few pages, these background-less panels appear, giving emphasis to a certain moment on each page. Coipel doesn’t use a consistent grid structure for his pages, but these moments where there are only the figures to focus on create a feeling akin to books that do. Books where there is a certain rhythm to the pages, and emphasis is getting placed on certain beats. It makes the book, from a visual stand point, read extremely well.

But, as much as I adore how “The Magic Order” looks, this is an issue that brings to bear many of the problems with this series as a whole. The characters of “The Magic Order” are just sketches of real people. None of them seem to have their own, interior motivations, and are instead just vehicles for whatever twist the plot might throw at them. In the previous issue, we learned that one of the protagonists was actually evil. It was a big twist, as this character then turned on his allies, quickly killing off most of the main cast of the book. It was a twist that did come out of the blue in many ways, but one that I was able to forgive for the fact that, when the character presented his case for why he did it, the details added up. It was a twist that worked with character motivations, and fit the plot, as long as you didn’t think about it too hard.

“The Magic Order” #6 has a couples of twist. Some that work, some that don’t. But together it paints a bleak picture of what this series is as a whole. In the moment, when these twists work, they feel good. But as soon as you take a step away from them, the problems start to come together. The way characters have behaved throughout the series, what seemed to be their motivations, just slowly start to crumble, and all that is left are the twists with nothing to back them up.

Now that we’ve reached the conclusion, the series feels like it had just enough world to paper over these six issues, but any more cracks are starting to show. I want to like the characters present in this issue, but I also want the book itself to care about them. Up until this issue, this series seemed to be avoiding some of Millar’s tendencies to be flat out cruel to his world and characters. With this issue, though, it seems like the characters that we are supposed to be rooting for are almost as bad as the people they are fighting against. The way they just murder the villains outright leaves the issue with a bad feeling. The fate of one character in particular, who was only tangentially involved in magic but gets trapped in a novel for the rest of her life, is particularly stand out in this case.

This is one of the comics that makes me consider what I really value when it comes to comics. Is a book that looks beautiful, and does a good job of telling its story visually, make up for a story and characters that just do not work? For me, the answer is no. As wonderful as “The Magic Order” #6 is to look at, comics are a storytelling medium. If the story isn’t compelling, then it’s not using the comic medium to its fullest. Because of that, as much as I like looking at this issue, in isn’t something I can recommend. There isn’t any substance to the beauty.

Final Verdict: 6.0 – “The Magic Order” #6 has Mark Millar falling into some of his worst tendencies, leaving Oliver Coipel’s without a compelling story to back it up.