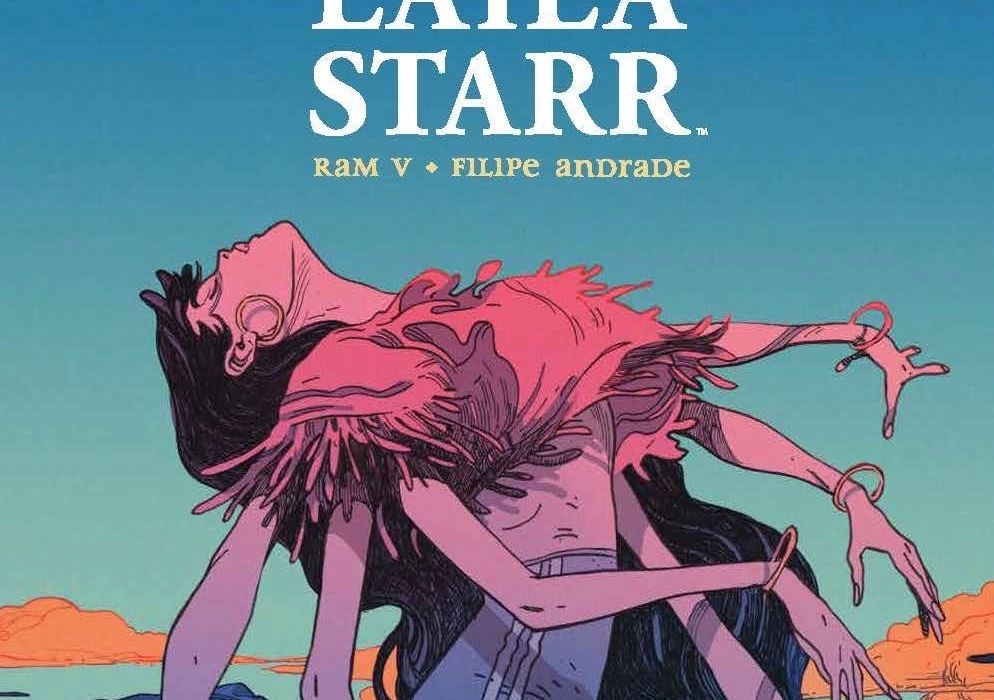 With “The Many Deaths of Laila Starr” #5, Ram V and his co-creators end their amazing series with an exquisite finale. (Warning: may contain minor spoilers.) 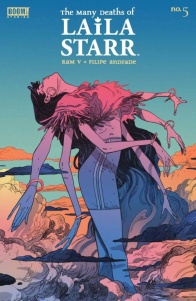 What will Laila Starr do when she’s finally given the chance to resume the mantle of Death? Finding herself back in the world, Laila searches out Darius and discovers that for the first time she will be witnessing the death of someone close to her. When they are both given a chance at immortality, their individual decisions lead to a surprising and touching series finale.

Way back in the first issue, this series first kicked off with Death learning she’s out of a job. In the short scene that follows, Death incarnate embodies pretty much everything we might imagine: spite, vindictiveness, vengeance – an unwavering sense of self-importance. “You can’t just fire me!” she bellows. “I’m an absolute consequence. It’s in the job description.”

Death has been around since forever. There’s never been any reason to think she won’t be here until the bitter end. Even after learning her fate, she remains petulant. “Oh, boo hoo,” she sneers. “I’m going to go down there and be mortal . . . .”

Thus, Death becomes Laila Starr and immediately sets out on a quest to find her arch nemesis, Darius Shaw, the man who will someday discover the secret to immortality.

Credited to a writer named Akur Puri, these ethereal, lyrical lines serve as a bridge between the narrator and the book’s two main characters as they seek resolution:

i whispered to the sea
what lies beyond the edge?
in gentle waves she said to me
love and mistakes and heartbreak and victories
i thought i had put all that behind me

Laila and Darius have both suffered loss that ripped their lives asunder. Each of them, in their own way, didn’t know how to go on, yet both of them persisted. Life and Death are intertwined. Without Death, Life means nothing. Acceptance is learning to live, to defy Death as long as you can.

Visually – like the four issues before it – “The Many Deaths of Laila Starr” #5 is simply stunning. Filipe Andrade’s illustrations and breathtaking colors continue to amaze and delight. A great example is the two page spread where we first see Laila. Taken together as one, the scene is a story unto itself.

Laila arrives at the airport, a book of poetry in her hand. Conspicuous sunglasses grab your attention and lead your eye to her spectacular hair, flowing behind her like a cape. We seen the book of poetry in close-up and read the lines of a short poem as Laila awkwardly rehearses what she’s going to say. Oblivious to her surroundings, she steps in front of a truck that barely screeches to a halt. The driver is furious. Laila remains oblivious.

Andrade’s expert paneling guides us intuitively through the scene – beginning, middle, end – with great command of rising and falling action. Brilliant magenta provides punctuation, as pastel pink and soft aquamarines tie it all together. Framing, composition, colors, facial expressions, gestures – all of it works together to create a harmonious scene that feels organic across its seven panels. Like it’s a single image.

Throughout the book you’ll want to linger and slowly soak in Andrade’s work, but you’ll also be carried along so effortlessly you’ll be fully immersed in the story. It’s gorgeous, spectacular work but it’s never gaudy. Nor does it ever call attention to itself without reason.

In some ways, AndWorld Design’s lettering may go unnoticed. And that’s the beauty of it. In truth, the book is heavy on narration, but it never looks or feels that way. AndWorld keeps things simple and inconspicuous. Sections of narration, interior monologue and character dialogue over certain scenes are all crystal clear. There are multiple levels here, but AndWorld weaves them all together beautifully.

If you haven’t been reading “The Many Deaths of Laila Starr,” there’s probably no way to explain the quiet, yet reassuring, bittersweet sense of finality this fifth and final issue provides. With a subtle twist at the end that you likely didn’t see coming, the story comes to an end with a mixture of poignancy and hope. After a great first four issues, the fifth and final installment is incredibly satisfying, ending the series in way that feels both surprising and inevitable.

This is the kind of series you can recommend to your persnickety friends who think comics don’t belong on the same shelf with capital L literature. “The Many Deaths of Laila Starr” is as well constructed and philosophically nuanced as any Literary Fiction out there. It’s also one of those comics that comes along and reimagines the medium. It’s like that old chestnut about the first Velvet Underground album: it only sold 1,000 copies, but everyone who bought it started a band. I guarantee other creators are reading this series and pondering their next move. This book is sure to reverberate for quite some time.

Final Verdict: 10 “The Many Deaths of Laila Starr” #5 is the perfect ending to a brilliant series.