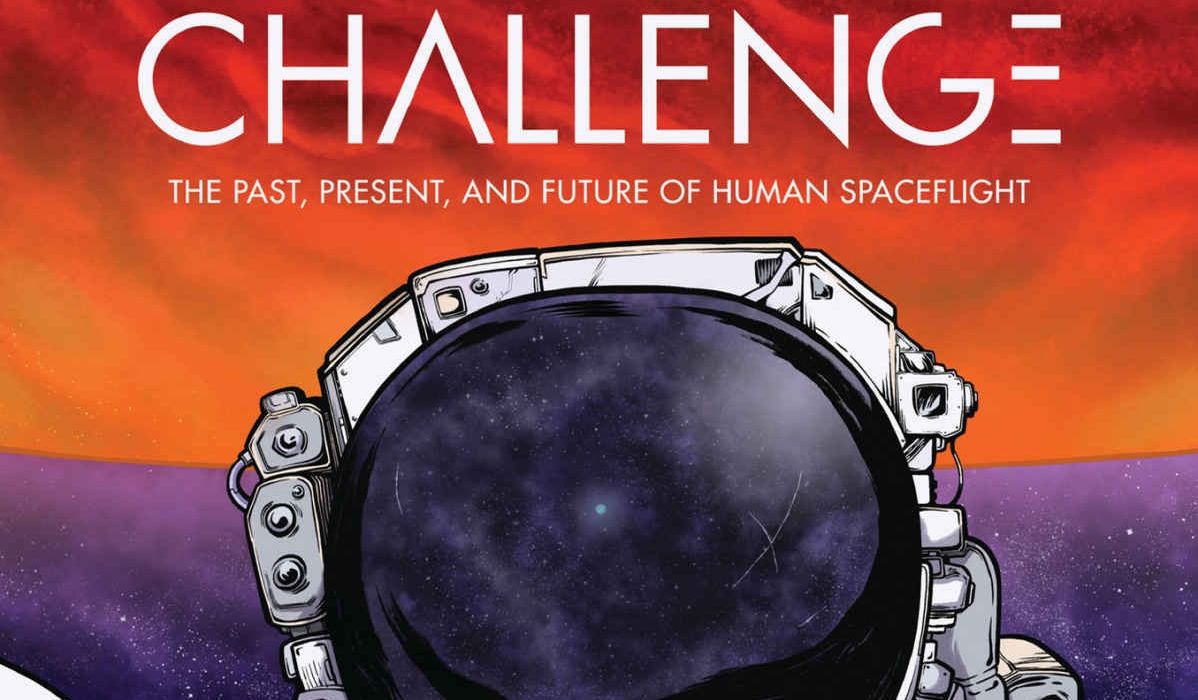 Why do we want to put a human being on Mars? That is the first of many questions asked in Alison Wilgus and Wyeth Yates new graphic novel, “The Mars Challenge.” From why we even would want to go, all the way to the specifics of landing a spacecraft on Mars’s surface, “The Mars Challenge” explores and explains the difficulties facing humanity’s exploration of Mars, and what it will take to get there. 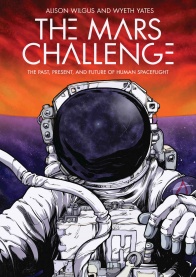 Written by Alison Wilgus
Illustrated by Wyeth Yates
Travel to deep space and back again with The Mars Challenge, a nonfiction graphic novel for teens about the science and logistics of a manned mission to Mars.

Nadia is a teen with a dream: to be the first woman on Mars. But to get there, she’s got to learn all she can about the science of spaceflight. It’s a good thing her friend Eleanor is an Attitude Determination and Control Officer—basically, she pilots the International Space Station!

Eleanor takes Nadia on a conceptual journey through an entire crewed mission to Mars, and explains every challenge that must be overcome along the way; from escaping Earth’s gravity well, to keeping the crew healthy as they travel through deep space, to setting up a Mars base, to having enough fuel for the trip home!

In The Mars Challenge, writer Alison Wilgus and artist Wyeth Yates bring the reader on a thrilling interplanetary voyage and clearly illustrate the scientific concepts and complex machinery involved. Humans can reach Mars in our lifetime—this book explains how it can be done.

Why is this a graphic novel? That’s one of the first questions I ask myself when I sit down to write one of these reviews. What is it about this, be it something inherent to the story itself, the way it is being told, anything, that makes this a good fit for being a graphic novel? Frankly, a lot of the time, there isn’t a good answer to the question. It’s a graphic novel just because it is. It could just as easily be a prose novel, or a movie, or slotted into any other number of media with only minor changes. Which isn’t always a bad thing! Not every graphic novel needs to take full advantage of the medium. There are plenty of comics whose stories I love that are only incidentally comics. But I think if a comic is going to be really, truly great, it needs to put as much work into taking full advantage of the medium as it does tell an amazing story.

“The Mars Challenge” is a nonfiction graphic novel about, what else, the challenges of sending a crewed mission to Mars. The graphic novel walks the reader through the steps of sending a human to Mars, from getting someone off planet, having them land on another one, having them return home, and everything else in between. Each of these challenges is walked through by the stories two main characters. First is Nadia, a woman eager to become a part of the crewed mission to Mars. Second is Ellie, a scientist that knows all the science about what it would take to put a person on Mars. The graphic novel follows these two women as they talk through what a Mars mission would look like.

It’s these two characters, Nadia and Ellie, that make the case for why “The Mars Challenge” is a graphic novel. While all of the information that is presented in “The Mars Challenge” could have easily been relayed in a textbook, the way that the information is tied to specific characters makes everything far easier to digest. It’s easy to be drawn in by Nadia’s excitement about the prospect of going to Mars, and Ellie’s clear explanations as to why nothing is nearly as simple as Nadia hopes. The dynamic between these two characters makes “The Mars Challenge” feel, for the most part, conversational rather than just a lecture on spaceflight. Even in the moments where the text does get a bit dense and it veers a little bit toward lecture, having Ellie and Nadia still keeps everything feeling light and interesting.

One of the most effective parts of “The Mars Challenge” is how it grounds each part in the setting it’s taking place. Whether Ellie is explaining how water filtration should work while walking around the international space station or explaining how difficult landing would be while looking up from the surface of mars, “The Mars Challenge” is able to effectively use the its graphics to keep the story interesting, and giving deeper insight into the most specific parts of the explanations, than would be effective otherwise. While there are a few stretch of the book where it’s just two talking heads discussing Mars, for the most part, “The Mars Challenge” is very effective at keeping the book visually interesting while still giving the reader quite a bit of information.

If you’re interested in what it’ll take to get a human on Mars, or just want to read a well-crafted nonfiction graphic novel, “The Mars Challenge” is worth picking up. It’s a fun, easy read that will teach you a lot about space flight, and putting together a crewed mission to Mars in particular.