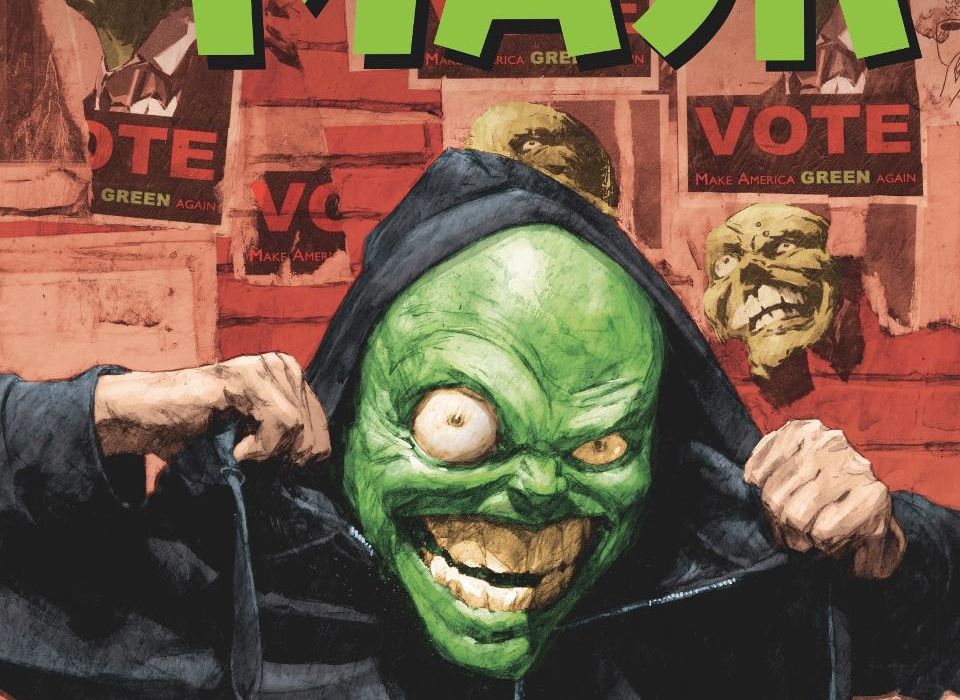 “The Mask” has always been one of those properties that have stuck in the back of everyone’s mind, whether it be in thanks to the movies, the brutal nineties comics, or simply that cartoonish, violent iconography. Now, Christopher Cantwell, Patric Reynolds, and others bring back the classic Dark Horse property and adapt it for the unrest of a modern era. Let’s see how that fares. 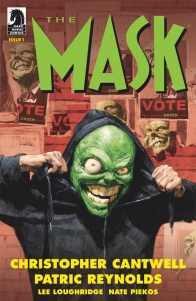 Make America Green Again! The best-selling comic series that inspired the blockbuster film returns with gruesome hilarity from the showrunner of AMC’s Halt and Catch Fire and Hellboy’s Patric Reynolds. Years ago, a weird mask of unknown origin and limitless power was buried in the cement of an apartment building’s basement floor. Edge City and its residents have all but forgotten the mysterious green-faced killer known only as ”Big Head.” But now, decades later, the bizarre Tex Avery-style killings are happening all over again and are on a collision course with a bizarre political campaign where a homicidal maniac wants to ”Make America Green Again”!

Cantwell ensures that we start this comic knowing the general populace is despicable. We’re shown a heavily stereotypical redneck family living close to Edge City who abuses their children with cages and feral dogs. This is set up so that when the Mask shows up to brutally murder them all, we feel more satisfied than alarmed because of the nature of this family, showing Cantwell cleverly getting us to subconsciously pledge allegiance to The Mask within the first few pages.

We move from here to a few different focal point characters. Cantwell ensures that each one is interesting, but the jump from scene to scene can sometimes make it a little hard to identify with their personalities. I did some research into “The Mask” and found out that most of these people, including detective Mitch, are pre-established characters, so it makes sense that Cantwell is leaning on that pre-assumed history somewhat. Seeing how these people have changed, from the now-retired and disgruntled Mitch Kellaway to Kathy who’s now running for office with a tough-as-nails intent to win is a lot of fun and builds a lot of character from the original depictions of them. For newer readers, these characters might be a bit of a tougher sell without knowing their connections to the Mask, but Cantwell does a good job of presenting what makes them essentially unique.

My only qualm with the writing so far is the antagonistic force is so nameless and generally horrible that it’s hard to really despise them beyond finding them annoying. Cantwell succeeds at making readers love to hate in one instance where Lazlo asks Kathy for a blowjob, yet beyond this, there’s little about them at this point that feels concrete enough to really understand their motivations. The person that Lazlo hires, The Canadian, seems ‘twisted’ for sure, but I honestly can’t figure out what they’ve hired him for and what he brings to the table other than cutting off his own ear and *checks notes*… eating it?

Patric Reynolds’ art is what really shines here. Reynolds brings a style to the table that feels evocative of the classic Doug Mahnke art that brought the character to life, yet infuses it with a dark, smudgy and realistic tone that makes it all hit eerily close to home. What really conveyed this idea from the start of the comic is that almost every person, not just The Mask, has moments where they hit these wildly cartoonish moments of human emotion, visually suggesting that everyone has the potential to become what The Mask represents. The redneck mother from the beginning is comically terrifying, Mitch Kellaway when playing golf has an almost Three Stooges-style face when he swings his golf club backward, and The Canadian has creepily calm complacency, especially in the act of cutting off his own ear.

Reynolds’ sequential action is also beautifully smooth and well-oiled that it’s pleasantly easy to read through. What makes it so interesting is that this smooth, silky action is often contrasted with uncomfortably dark narratives. Miss Doreen from the redneck foster home is terrifying because Reynolds plants her in one spot whilst she points aggressively and unexpectedly slaps the cage of one of the poor foster children. The shot afterward of The Mask violently beating up Doreen’s partner has these same instantaneous movements, except we can almost visualize The Mask’s hand moving bloodily through the man’s skull as flesh and viscera erupt from all orifices. Not all these scenes are gruesome, thankfully. We do get one neat scene at the end of Abner, one of the political candidates, throwing his phone whilst sitting on the bay, only to find The Mask laying where it landed. It’s a clever sequence that conveys in its simplicity that The Mask was trying to be found by Abner, whilst remaining masterfully succinct in execution.

Lee Loughridge’s colors here are honestly beautiful in how they portray the cynically bright and deliberately darker sides of Edge City. Even from the beginning scene in the foster home, the muted palette is offset at times by the hopeful blue glow of the TV or the aggressive red of the streetlights. Loughridge then takes us for a ride as the immediate next scene has a vibrancy reminiscent of 1960s camp, with pastel colors and faded blues and greens, giving us the tone that while this city may be bright enough on the surface, there’s a lot going on underneath it all. Loughridge balances the pastel and the gritty from this point, offsetting it with some glow and flashes every now and then that makes for some beautiful urban scenery that also highlights particularly gruesome moments in the comic.

“The Mask: I Pledge Allegiance To The Mask” is a fun update on a timely and classic comic, that serves nicely as a continuation for older fans and a great opportunity for newer fans to explore the series’ dark mythos. Cantwell handles old and new characters well and plays with readers’ emotions expertly, whilst Reynolds and Loughridge bring a gritty yet candy-like brilliance to the whole issue.

Final Score: 8.2 – “The Mask: I Pledge Allegiance To The Mask” #1 woos its readers with cynically dark undertones and well-crafted characters.