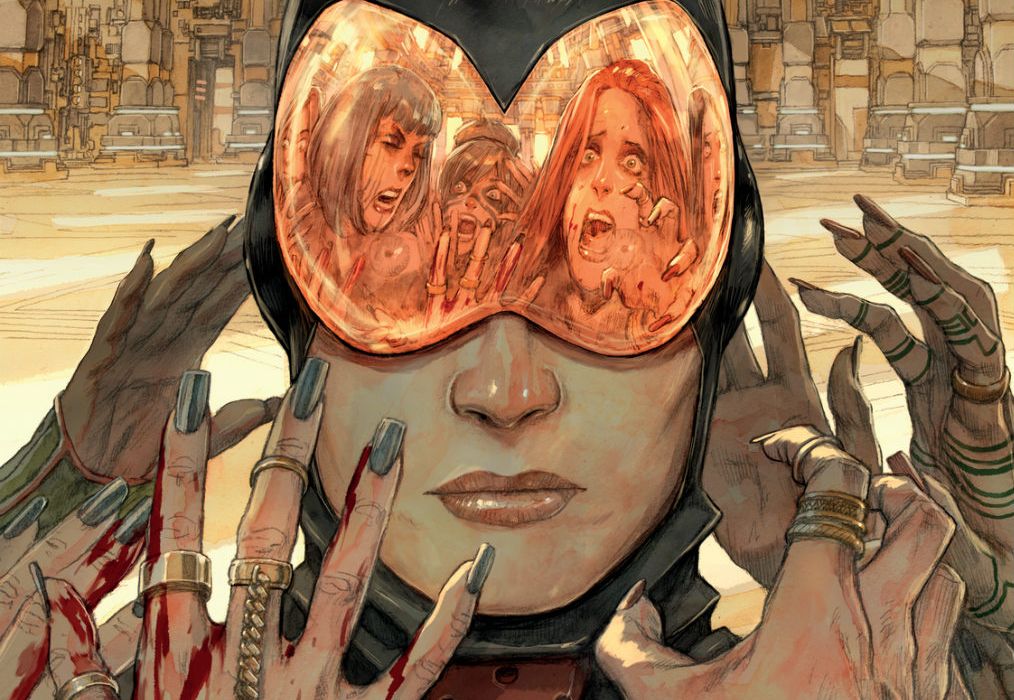 Alejandro Jodorowsky’s ‘Jodoverse’ has been a juggernaut in the comics industry for over three decades, starting with his seminal collaboration with Moebius, “The Incal.” Recently, however, Jodorowsky has been continuing the story for fan favourite character, The Metabaron, in his aptly named “The Metabaron” series. Book One debuted to widespread acclaim, but can the next phase in the series continue to show the same spark? 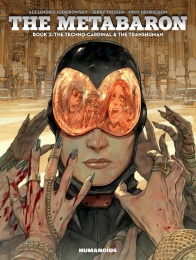 The Metabaron, returning to the land of his ancestors, Marmola, is convinced that the Epyphite, the precious resource sheltered in the heart of his home planet is trying to tell him something urgent. But the anti-gravitation properties of the liquid are not the only surprises now threatening the substance, or the Metabaron… With the New Golden Planet growing increasingly concerned over its shortage, and the continued threat of The Metabaron, the Techno-Pope entrusts his loyal Techno-Cardinal, Orne-8, to find the ultimate solution.

For those who were worried that all the story potential of this universe had been mined, fear not. Jodorowsky and Frissen have injected “The Metabaron” with a super condensed shot of energy that brings a whole new wave of story potential. The titular character, who is essentially omnipotent, is haunted by the prophecy that the universe will soon meet an end, and decides to start ticking off his bucket list: by losing his god-like power to indulge in human temptations. It’s a fascinatingly original method of bringing a Superman-like character down to our level, and makes for a fresh imagining of the originally militaristic character. This is best represented when The Metabaron meets a veritable harem of prostitutes with the same regality as he always carried himself with: immortalized by the quote “I WISH TO FORGET WHO I AM. SO I’M GOING TO DRINK AND SCREW UNTIL THE END OF TIME!”

However, the real breakout star here is the antagonist, Orne-8. Jodorowsky proves his relevance and innovation in the field by penning a power-hungry female who has a layered personality. We get a lot of facets of Orne-8: using surgical attachments to fake being a man to rise in the Techno-Techno empire; and forming a relationship with the previously-cold Metabaron. However, the most interesting situations in the book occur between Orne-8 and the Transhuman (a character decidedly relevant in this modern age).

The Transhuman is essentially an android that is literally gender-fluid. Jodorowsky typically pens the character as a male, but there is a sequence in which Orne-8 and the Transhuman disguise themselves as prostitutes to gain access to the Metabunker (the Metabaron’s ship). This sequence is one of the most striking in the entire book, as the Transhuman is forced by Orne-8 to uncomfortably shift to a female body-type. Jodorowsky has Orne-8 take on a dominant, almost voyeuristic persona as she watches the Transhuman shift, noting the irony of the situation coldly. It’s an unlikely metaphor that works surprisingly well in a sci-fi written by an 88-year-old white guy, and one of the most interesting sequences in the book.

What impresses me overall is Jodorowsky and Frissen’s ability to breathe fresh air onto this well-rounded universe. I’m venturing into spoiler territory here, but by the end of the book, the authors reveal to us that there is a multiverse based around the god-like mineral Epiphyte. Nowadays, this is a twist that occurs regularly in comic book worlds, but the way it’s executed here feels unique. Different universes aren’t just alternate takes on characters, but unexplored grounds for new plot elements to thrive. It’s explained that each universe doesn’t abide by the normal laws of physics, so the cliffhanger ending is intensified even more by the fact that for the next book, anything goes.

I was concerned about the change in artists going into this book, as Valentin Secher was such a big part of Book One’s appeal for me. Thankfully, Niko Henrichon proves to be another capable collaborator for Jodorowsky and Frissen. In terms of style, there’s certainly a looser, more traditional American comic book style in his work. However, it coordinates with the frenetic tone of the overall book. That being said, nothing is sacrificed in terms of worldbuilding quality here. Henrichon renders the sprawling cityscape of Marmola with an almost Moebius level of complexity, and draws the crap out of the almost post-apocalyptic setting of Othon’s Palace.

It’s also the little touches that Henrichon adds that give another layer of authenticity to this comic. My personal favourite were the neon signs on the prostitute star, all advertising different kinks in a light-hearted addition, but giving it a lived-in feel. On the same note, Henrichon renders each prostitute that The Metabaron goes through uniquely. Each has a different body shape, tattoos, interesting looking accessories or hair – it’s a subtle touch that feels like a nod to Moebius, the master of intricate Where’s Waldo style scenes.

Character-wise, however, I feel like Henrichon’s style falls a little flat. For the most part, the characters are dynamic and fluid, working well in a sequential style. One of the best examples of this is through the Transhuman. When Orne-8 demands for the Transhuman to become a woman, the sequence is shown in a fluid, body-horror-esque scene that is paced well – giving us a few panels of transformation and reaction without overloading us. However, Henrichon’s facial work can be overexaggerated at inopportune moments. The scene leading up to the Transhuman’s bomb exploding in the Metabunker is full of panel after panel depicting the Metabaron with the same, open-mouth expression of anger. Capping off the sequence, Henrichon has the Metabaron staring at the camera with eyes as bulbous as a frog’s in a panel that just doesn’t feel right.

It’s just so surprising that in contrast to these moments, there are genuinely moving sequences with believable acting. Henrichon pens the aftermath of a galaxy-collision with a restrained elegance. The occurring page depicts the Metabunker amidst a dark sky being lit up by an explosion, followed by the Metabaron protectively clutching Orne-8 as their ship exits the fray of the blast. We get a clear sense of what’s going on, with the undertone that the Metabaron is risking his now-mortal life for a girl he’s only just met. The following page continues this idea, with Henrichon adding clear notes to the Metabaron’s body language in each panel that he’s trying to shield Orne-8 from harm. It’s excellent visual storytelling, and pays off not only here, but throughout the entire story.

The Jodoverse is having a quiet renaissance with Frissen and Jodorowsky’s “The Metabaron” series, and Book Two raises the stakes the highest they’ve been since “The Incal”. This entry has some excellent character moments, awe-inspiring world building in a series that’s already packed to the brim, and amazing environment rendering by artist Niko Henrichon. The character work in the art can fall a little short sometimes, but it does little to harm the overall quality of this piece.

Final Verdict: 8.9 – A great addition to the Jodoverse mythos, “The Metabaron: Book Two” has all the makings of a classic sci-fi and then some. If you’re a fan of the current Image Comics Sci-Fi movement, you need to jump onto this series.