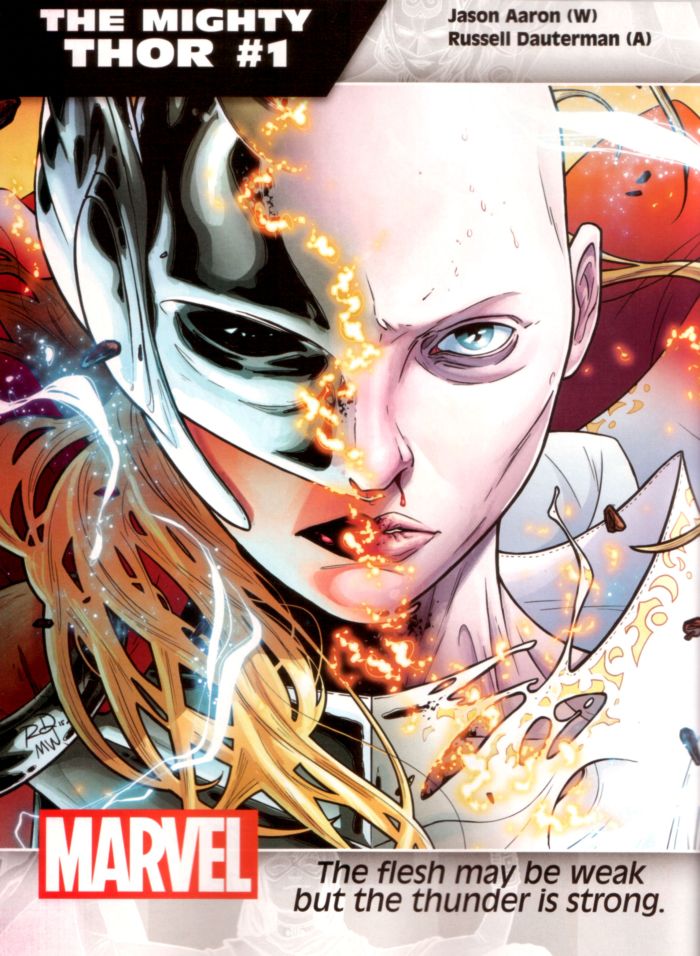 Thor and Jane Foster may have been revealed to be one and the same, but as Aaron and Dauterman’s arc begins it’s clear they have two very different battles to fight. 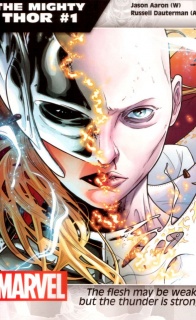 When DR. JANE FOSTER lifts the mystic hammer Mjolnir, she is transformed into the Goddess of Thunder, THE MIGHTY THOR! Her enemies are many, as Asgard descends further into chaos and war threatens to spread throughout the Ten Realms. Yet her greatest battle will be against a far more personal foe: the cancer that is killing her mortal form.

It’s crazy to think that it’s been over a year since the first issue of “Thor” staring a female hammer-wielder was released. While there has been no shortage of uproar around the idea of a woman taking on the mantle of the God of Thunder, Jason Aaron’s impressive writing, the widespread use of Thor across multiple books, and the character’s subsequent mass appeal did much to assuage those who thought this gender swap was little more than a publicity stunt.

Now, post-Secret Wars and into the next phase of Marvel’s world-building, it’s great to see Jane Foster retaining the mantle  and being allowed to experience the unique dynamic of her specific brand of ‘Thorness’.

Aaron picks up relatively close to where he left off with this storyline, allowing for a kind of soft-reboot that doesn’t feel like it retreads too much old ground for previous fans of the series, while offering enough information to ensure new-comers don’t feel lost. Jane Foster is still Thor, she’s still Midgard’s representative on the Congress of Worlds, and she’s still dying. Issue one sets up a familiar ‘Big Bad’ for Foster’s first arc back in the saddle, Malekith the Accursed, whose nebulous plotting brings a hail of Alfheim’ finest down on Earth within the first few pages.

However, while Aaron’s main plot may be an Asgardian court intrigue of godly proportions, he balances this epicness beautifully with the painfully human battle of Jane against her own cancerous body. Aaron reveals that using Mjolnir is negating the effects of Jane’s chemotherapy, essentially forcing her to chose between saving herself and saving the rest of the world.

Aaron’s writing is every bit as sharp as it was during his last run on Thor, and he seems to have a real handle on the duality of Dr. Jane Foster and Thor as characters. The book opens with an almost uncomfortably frank account of Jane’s treatment, and throughout the issue her voice feels pragmatic and resigned without ever straying into maudlin territory. Aaron plays this tough reality off against the heady, ‘Ye Olde’ speak of Thor, and we get a true sense of the escapism that Jane feels when she transforms, leaving behind both the Earth and her sickly body to wander through other dimensions and forget herself for a few hours.

The dynamic between the two characters feels reminiscent of the early She-Hulk/Jen Walters struggle and, while Aaron hasn’t yet made it clear, it’s possible that Jane is worried about losing herself to the similarly addictive pull of her own super-powered alter-ego.

This issue also sees the return of Russell Dauterman on art duties, and he picks back up without missing a beat. Dauterman’s frail, feeble, and yet determined Jane Foster is heart-rending, and watching her struggle through the first few pages really heightens the switch between her human and Asgardian forms. Dauterman’s clean lines and uncluttered style lends themselves really well to larger, more dynamic panels, and the brief glimpse of The Avengers that we see offers a great signpost to his readiness to tackle potentially massive battle scenes further down the line.

I feel like I’d be remiss to overlook Matt Wilson’s work on colours in this issue. His bright, exuberant tones are perfect for a poppy book like this one, but he manages to infuse this issue with some more subtle tones too. There’s a distinctly more washed-out, almost grimy air to the earlier, Earth-bound panels in this issue that is replaced with a god-like vibrancy as Mjolnir swings into view and we head for Asgard. His ability to highlight the other worlds with a low-key, yet distinctly different palette really helps further the sense of disassociation that we feel when Jane sheds her mortal form.

Fans of Aaron’s take on the Thor mythos will find a lot to love with this book. His criminally commercial take on the Roxxon corporation is still front and centre, the bureaucratic back-stabbing of the nine realms is still in full flow at the Congress of Worlds, and he still manages to find a way to anchor the character of ‘Thor’ in something truly empathisable. What’s more, there’s a surprising reveal at the end of this issue that could signal the first true nemesis for Jane Foster’s iteration of the God of Thunder.

Final Verdict: 7.4 – Fans both old and new alike will find a Thor to love in this high-flying first issue.