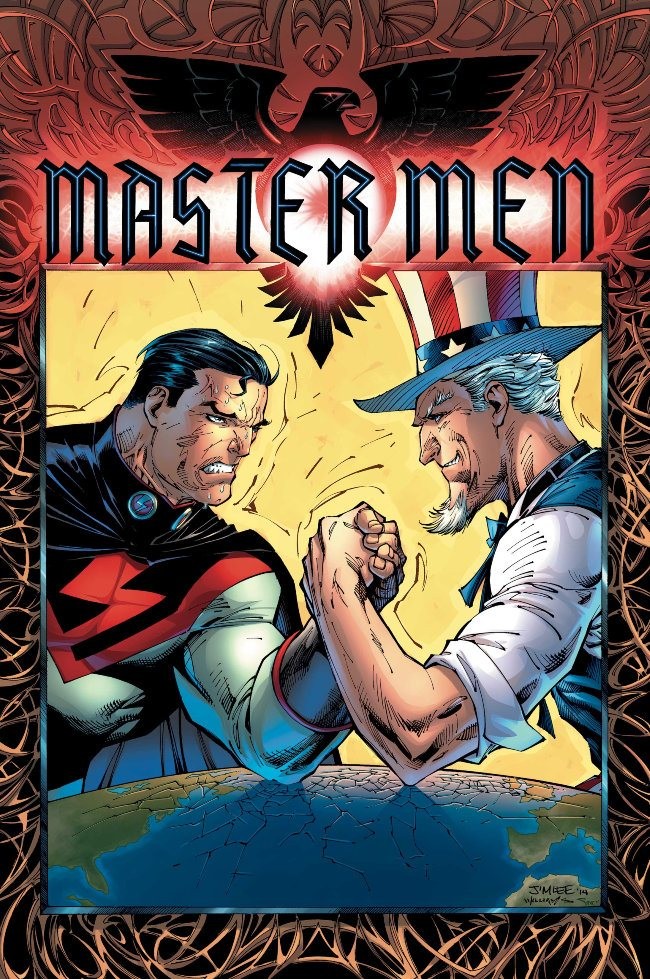 Artist Jim Lee joins Grant Morrison for “The Multiversity: Mastermen” #1 to tell a story that feels incomplete despite an intriguing premise with occasional flashes of fun. The latest chapter in “The Multiversity” saga doesn’t match the brilliance of the previous six issues mainly because of Lee’s lackluster art. 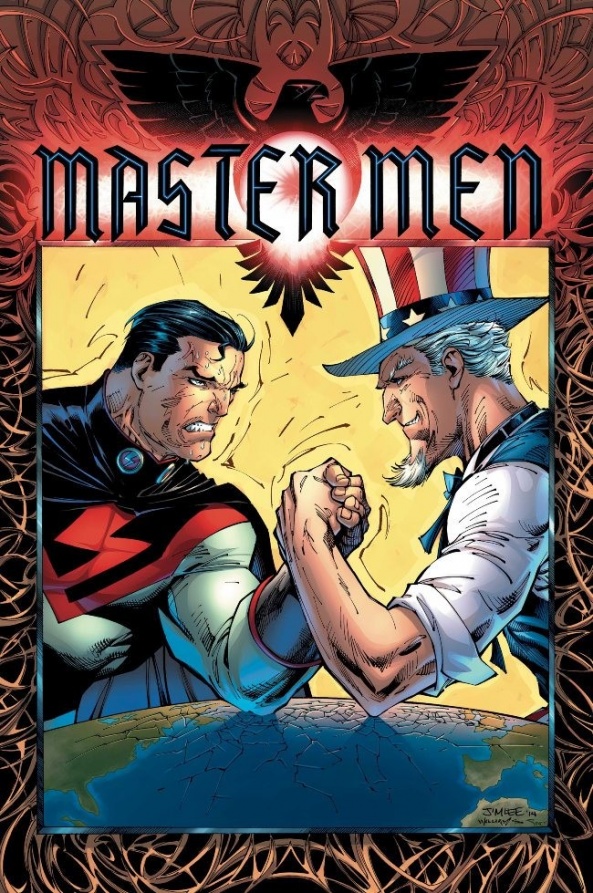 Superstar writer Grant Morrison joins legendary artist Jim Lee on Earth-10 for one of the most dynamic, action-packed issues of this entire world-shattering series – THE MULTIVERSITY: MASTERMEN!

Imagine a world where the Nazis not only won World War II but went on to direct world culture for the next 60 years with the help of an orphaned, alien super-weapon known as Overman! But hope is not lost! Rising from the ashes of oppression are a diverse band of heroes raging against the fascist regime – a band of heroes known as THE FREEDOM FIGHTERS!

What nightmarish parallel worlds haunt the dreams of Overman? Who is the mysterious figure called Uncle Sam? And when the dust settles, will the actions of Phantom Lady, Black Condor, Human Bomb, Doll Man and The Ray be enough to stop Leatherwing, Blitzen and the other “heroes” of Earth-X?

Learn all this and more in this exciting issue that acts as chapter seven of the critically acclaimed MULTIVERSITY storyline.

What if Superman’s rocket had landed in the Sudetenland and into the grips of Adolph Hitler instead of a small town in Kansas? “The Multiversity: Mastermen” #1 answers that question and displays how Nazism and its mouthpiece/hero Overman rules Earth-10 with a mighty fist. The anti-Nazi hero Uncle Sam and the Freedom Fighters mysteriously taunt and watch over a world controlled by an alien god who stands strong, yet is plagued with doubt over actions he has carried out over the last sixty years.

The ideas that Morrison explores are fascinating. He demonstrates that heroes are born and that, despite their upbringing, can harbor much guilt within them because of decisions they have made and the path they were pushed toward in life. Morrison may not have fully fleshed out these ideas in a refined way with this issue, but it is not without value. Themes from past issues are only faintly touched upon and without the same panache as we expect from Morrison.

The solicit promises an “action-packed” issue and story beats that are either abruptly left dangling or missing entirely from the book itself. Characters brood, ponder, or make declarations, yet nothing of real import actually happens. Morrison has great ideas and characters to work with in this issue, yet not much happens in the story to assist in building a connection to Overman or the rest of the cast. We are introduced to some characters in one splash page, yet they are never mentioned again despite their seemingly pivotal role in the book. Hopefully they will appear in the last chapters of Morrison’s opus and have a chance to play a larger part in the story.

Introductions are made without much dialogue or background that could bring the characters even more fully to life. Sparseness of information can sometimes aid in a story’s value, yet it doesn’t always work in “Mastermen”. Morrison’s use of a particular character and his diary narration, however, is masterful and is an example of what the rest of the issue could have used to push the issue to perfection. The narration is intriguing, refined, and leaves us wanting this character to regale us with more of his and the rest of Earth-10’s mysterious background and each character’s machinations.

“The Multiversity” series is a labor of love for Morrison, yet seems like just a one-off gig for Lee. The care and attention to detail is clearly not there and, as a result, taints the issue. “Mastermen” may not be Morrison’s high point, but it is clearly not Lee’s best work. With the caliber of something like this series, you would expect Lee to put as much passion into this as he did for “Hush”. The same artist that created the rich watercolor flashback scenes in that Batman epic is not the same artist that we see here. Lee has clearly rushed his way through Morrison’s script and, as a result, the book suffers because of it. Leatherwing’s legs on one splash page are comically humongous, with one being larger than the other. In another scene, the legs have shrunk to a much smaller size. This is just one example of the egregious sloppiness in his art. The addition of four inkers on the book may also have contributed to Lee’s awkward and inconsistent art.

The art is a distraction throughout, yet the opening splash page with Hitler is Lee’s one shining moment. He demonstrates his ability to express Morrison’s humor and the possibility of greatness that could have been. The splash page has the führer on the toilet attempting to make a “splash”. With neck strained and mouth open in agony, Hitler is reading a “Superman” comic with a cover that has him being knocked out by the Man of Steel. The art loses quality after that page, with artistic flourishes leading to distractions that take enjoyment away from the book.

One such distraction is the liberal use of crosshatching. Lee’s use of this technique is rampant throughout the issue and only heightens the feeling of his art being rushed. In one scene between Overman and a female paramour, lines on the woman’s face appear to have just been scribbled on in a haphazard way. Crosshatches even appear inexplicably on the side of walls.

The only saving grace of “Mastermen”’s artwork is the coloring. Alex Sinclair and Jeremy Cox bring a dynamism to the proceedings that conjure up a dark and ominous world. The sky, whether in the present day or in Overman’s black and white dream sequence, looms with intensity. There is even, at times, a photorealistic feel to it. A two page splash is particularly effective in showcasing a moment of pure militaristic claustrophobia and despair. The bright blue sky jarringly contrasts with Overman’s gray, black, and red costume and the drab colors of his military hordes.

Although past installments of “The Multiversity” has introduced us to other characters for seemingly fleeting moments, Morrison has always been adept at leaving us craving more adventures with them while also feeling thoroughly satisfied with what we were given in just one issue. “The Multiversity: Mastermen” #1 doesn’t feel complete, yet moments of skill, such as the narration and occasional humor, still make this a book worth reading despite its flaws.