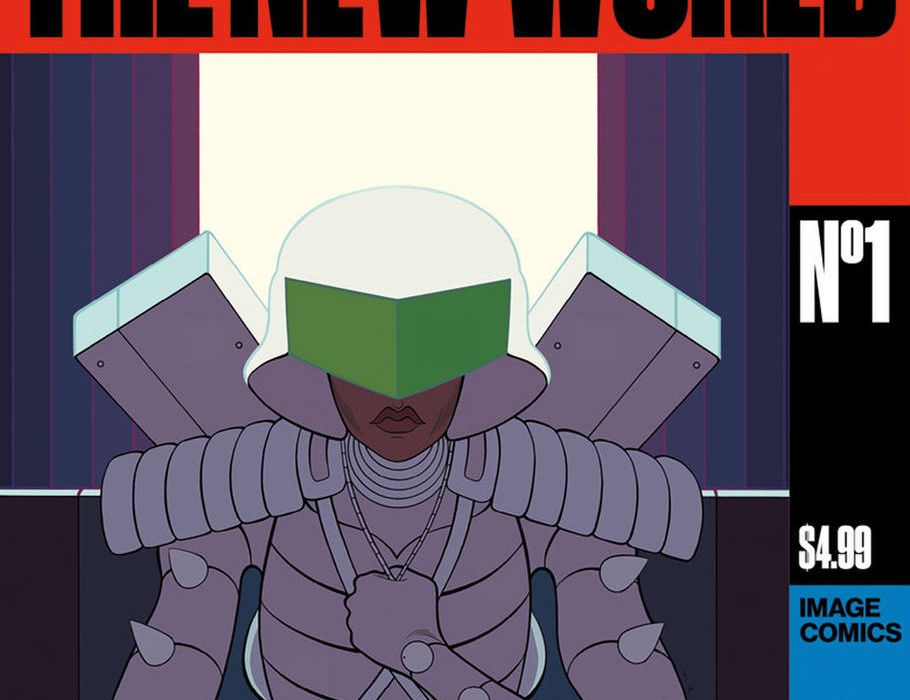 While there are plenty of post-apocalyptic stories on the shelves right now, I don’t think any of them are nearly as colorful as “The New World” #1, Ales Kot and Tradd Moore’s new series. Check out our review as we dive into the world of New California, but be warned, there are some spoilers 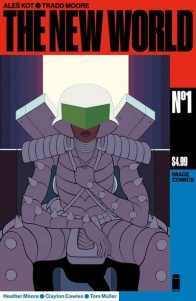 Written by Ales Kot
Illustrated by Tradd Moore
Colored by Heather Moore
Lettered by Clayton Cowles
The United States of America—after the Second Civil War. Two lovers meet. One: a straight-edge vegan hacker anarchist boy with a penchant for messing with the State. The other: a chaotic, hedonistic cop with a reality TV show and a license to kill. This really shouldn’t happen—and yet, somehow, it does. And soon, the entire state of New California is after them. This ballistic sci-fi action romance miniseries—in the vein of Mad Max and Romeo and Juliet—from ALEŠ KOT, TRADD MOORE, and HEATHER MOORE begins with a massive-sized debut issue, and features a backup comic introducing the talents of AARON STEWART-AHN and SUNANDO C!

The double page spread where we first see the New California skyline pops off the page. In the distances there are pyramids, and giant, towering buildings that look almost nothing like the sky scrapers of our world, colored in bright, neon pinks, yellows and blues. And beneath these massive structures is the urban sprawl, miles of brown houses piled on top of one another. From this angle it looks like there is barely enough space for roads, let alone people. It’s here that the politics of “The New World” #1 are laid out, just because the people in charge are fun and colorful, it doesn’t mean that the people in the upper class don’t still think they’re above you.

After a little introductory text over an image of nukes going off on the planet’s surface, there are three double page spreads that set up the issue. From the start, you can see that “The New World” #1 isn’t going for subtle. The first of these spreads is an image of the crumbling, decimated White House. If these double page spreads don’t make it clear, for those reading on a digital device, you’ll want to make sure you read it in two-page mode. If you don’t, not only will you miss a lot of the effect of Tradd Moore’s artwork on these spreads, but there is a lot of juxtaposition between facing pages that gets lost when you read each page one at a time.

The story follows two main characters. Kirby, the anarchist hacker and Stella, cop who appears on Guardians, a live-stream future version of COPS, when she isn’t out partying. These are two characters that couldn’t be farther apart at the beginning of the story. The difference between these two characters, at least at first, seem almost so extreme as to be comical. “The New World” #1 is not subtle about laying out these differences. But for this story, that works.

Every page of “The New World” #1 is just jam packed with detail. The pages after the opening double page spreads show Kirby and Stella’s parallel journeys through their day. Stella, in her full body military gear as she goes to catch come criminal in a run down old apartment building, and Kirby as he sneaks his way into the headquarters of the guardians to send a message to the people of the world. On opposite, facing pages we see these two go through their respective journeys, exactly the same page layouts between them. The very slick, white, technological cop moving through a run-down area while a run down, tattered man moves through the slick, white interior of the Guardians’ headquarters.

I could go on and on about Tradd Moore’s work throughout this issue. Everything is highly detailed and busy, without ever being difficult to understand. The designs of all the characters are similarly busy, but never feel over designed our out of place in the world this issue has created. The way that Tradd Moore is able to create something that is both frantic and understandable, busy but clean, is nothing short of amazing.

This is helped by Heather Moore’s colors. As far as I can find on the internet, this is Heather Moore’s first published work as a colorist and she is unbelievably good. While there is plenty of work done by both Tradd Moore and Ales Kot in the separation of the two main characters that shows how different they are, some of the most powerful contrasts come from the colors. The way that in the slums everything has a slightly brown hue, or the walls inside of the Guardian’s buildings are all pure white. And these are just the basic moments. When things get a little crazier, as in the rave that comes later in the issue, Heather Moore’s colors on Tradd Moore’s artwork make it somehow both psychedelic and yet still completely, easily legible.

All this, and I’ve barely even touched on the story or the thematic elements to “The New World” #1. In some ways, this book feels like a companion to Ales Kot’s other book, “Days of Hate.” But where “Days of Hate” is subtle, “The New World” is bombastic. The characters both proclaim who they are, and what they think about themselves. The story, which has a fascistic TV show about hunting down criminals and killing them on television, isn’t the stuff of subtle satire. And in some cases, the dialogue and characters can be a bit on the nose. But, while the characters are pretty overt, there is still the thematic undercurrent of this issue that makes the whole thing work.

Thematically, the book deals with a world that experienced a second civil war, but has now restructured into a society that, on the surface, seems like a good world. It’s a society that is founded on the fundamentals of the American culture that came before it. Freedom, prosperity, that sort of thing. But, the book clearly shows that this culture, even though it may seem more accepting than the future that is posed in “Days of Hate,” is still terrible for most of the people living in it. While “Days of Hate” goes after the xenophobia of our current political moment, “The New World” #1 is more concerned with our political system as a whole. Kot does a good job weaving in questions about our police system and the class system of America into a story that spends most of its time being about star crossed lovers and insane TV shows.

Overall, “The New World” #1 is an exciting beginning to this series. This first issue is more than sixty pages long, but never once feels like it drags. This is an issue that is jam packed with both ideas and artwork, and it can give a bit of sensory overload in the best way possible. I’m excited to see where this miniseries is heading, where the characters end up, and even more than that, just to have the chance to spend a little more time looking at the fantastic art work in this series.

Final Verdict: 9.0 – “The New World” #1 features stunning artwork and a world that the reader can become fully immersed in.