We are now more than halfway through the this tale of techno-terrorists and police states and issue #3 is a pivotal one for both the characters and the creative team. Mild Spoilers Ahead 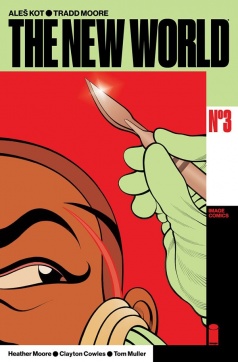 Stella, Kirby and Clark are on the run and need to stay ahead of those who are tracking them, craft an escape plan, and rescue Stella’s cat, Godzilla.

The more we learn about Stella, the more human she becomes. As the story progresses, she continues to shed her battle armor and we see her as the normal young woman she is at heart. This beginning of this chapter goes as far as to literally look inside her head and catches her at her most vulnerable. This issue is a surprising one. The energy level changes drastically from that of the first two. As the characters quickly find that they are in desperate need of hiding from watchful eyes, the pace of the action and story telling ramps up. Aleš Kot’s (“Zero,” “Secret Avengers”) style switches up a bit here too. Moving from his seemingly calculated and purposeful story telling, we are thrown through hectic shouting matches, impossible standoffs, brutal hand combat, and a wrap-around timeline that would make Tarantino applaud. With major, set up and reveals out of the way and having all major players on the board, Kot is free to rush in – guns and smoke grenades in hand. His dialogue is terrific throughout. Every character has a distinct voice with past baggage that is carried through their words. Even when things seem dire, the clever humor is never far from making a reappearance.

Issue #3 has the least amount of text, focusing more on the action. Moving things quickly to the next chapter is the right thing to do at this point in the story, but it feels a little bit less than what has already happened, even with some excellent violence and dynamic action. This is not to say that this a bad issue, far from it, but it traded in some of the emotional weight for ‘fly by the seat of your pants’ whimsy. This world, that is a perfect blend of “Judge Dredd,” The Running Man, “Transmetropolitan,” (loved the nod in this issue) and “Tank Girl;” “The New World” continues to be one of the best miniseries getting released right now. This journey has been an absolute delight.

Tradd Moore and Heather Moore’s art is nothing short of stellar. I continue to be completely blown away by every single panel. No detail is too small or grand for this team. They were made for this and they are destined to be household names in the world of comics. Readers of Marvel books like “Secret Warriors” or “All New Ghost Rider” will be familiar with his work, but Heather is a new-comer to the industry and paired with Tradd’s illustrations, her colors take his work on a whole new journey. There are few books out there will pencils like this. Everything is so perfectly executed and pristine, you start to wonder if these were ever in a draft stage of sketchy lines and erasure marks or if they just came to be from mind to page — pouring from his hand like a magical elixir. Lighting and color design is perfect panel to panel. And Tom Muller’s layout design takes us from clean-cut, timed beats to border-bursting, whirl-wind action from one moment to the next. Characters stay within the frame until their emotions and energy have them explode from one panel to the next or nearly off the page.

Back to Heather’s colors: Bright, fantastical, full, and gorgeous. This is one of the few books out there where it feels like every person, item, and setting detail that is deserving and undeserving of its own color gets one. There is no wash of a single tone over these panels, aside from one or two that use it for setting establishment or dramatic effect. This is a living, breathing world that has earned its existence and permission to show every part of itself to us. It feels full and completely satisfying. Tones and color levels are another thing that Heather is simply masterful with. Though brilliant, the colors are pulled back just enough to keep us from being overwhelmed by the rainbow palette. Your eye will dance across the pages trying to absorb every little detail rather than attempting to jump to the next page just to continue the story. The combined styles of the two Moores with Muller’s design leaves us at an artistic culmination of 90s Disney, Genndy Tartakovsky and that time I did ‘shrooms in college. In short, it is wonderful.

“The New World” #3 continues to be pleasure to read and a total, welcome surprise. Picked up on a whim because I thought the cover was cool; I guess that old adage isn’t always right.

Final Verdict: 8.0, A fantastic dystopian, character piece. Keep an eye on this creative team, they are something special.