Multiracial 13-year-old Moth Rush has never felt like she belonged in her small Massachusetts hometown of Founder’s Bluff. Often the target of bullying and harassment by her classmates, Moth spends much of her time wishing she were cooler and more exciting. As luck would have it, Moth discovers on Halloween that she descends from a line of witches. Moth, who is fascinated by all things related to magic, is elated by the discovery but quickly learns that her new abilities are difficult to master on her own and aren’t the simple fix to her problems that she hoped they would be. 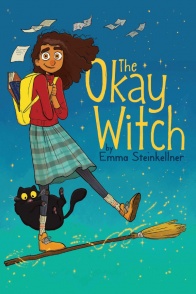 In “The Okay Witch”, a colorful middle grade fantasy, young readers are introduced to numerous topics and situations that subtly but intentionally touch on themes of race and prejudice. Although these themes conjure expectations of darkness and emotional heaviness, Steinkellner delivers them with a light, insightful, and an often humorously relatable touch that runs in parallel to the everyday struggle of growing up and trying to fit in with peers.

Throughout the story, three notable but complementary color schemes exist. Modern Founder’s Bluff is highly saturated, with blue and green variants heavily used in backgrounds alongside occasional splashes of red and gold that all speak to the strength of the here and now. When the story moves to the past, the color is stripped and Founder’s Bluff is depicted in a rusty set of nostalgic coffee browns, blacks, and grays. Not only do these colors suggest an old and traditional setting, they also reflect the overt and figurative darkness of the times and the literal hunting of witches that was occurring in the town. The third and final color scheme is found in the order’s magical refuge of Hecate. The safety of this setting away from the murderous intentions of Founder’s Bluff is presented in soft, icy cool and pastel tones, giving it an ethereal feel. Neither as dark as the Founder’s Bluff of the past, nor as intense as the Founder’s Bluff of the present, Hecate exists as a timeless in-between that provides a sanctuary from the harshness of the real world regardless of era.

However, Hecate shouldn’t be viewed as an escape from all elements of reality. Although it is meant as a place of refuge from one type of discrimination – that against witches – Moth’s grandmother Sarah tells Moth that there is no escape from all discrimination, stating that “[t]he past is much closer to you than you think. Even in Hecate, it has not left me,” (page 267). Further references to the discrimination Sarah and Calendula faced, outside of the discrimination shown to all witches, make appearances throughout the story. For instance, Calendula relates to Moth, while sharing about the history of the witch hunts, that although the witches were being discriminated against despite the color of their skin or their socioeconomic status, “some of us were more used to judgement and hate” (page 36).

Steinkellner doesn’t just use her characters as vehicles to point out that discrimination, particularly anti-black discrimination, has existed throughout history. She goes a step beyond to suggest that modern society should reexamine history, look more closely at what has been presented as unquestionable truth, and try to determine if all sides have been shared when history is passed from one generation to the next. Moth and Charlie have an uncomfortable conversation on page 104, wherein Moth pushes Charlie to consider that the founders of the town may not be the heroes everyone considers them to be. Charlie, a descendent of the founders, is quick to become defensive. This type of interaction is important for young readers to see, particularly as the story further unfolds, as it provides a fictional setting for them to explore the concept of privilege and perspective. Although conversations and stories centering around these themes appear rather evenly throughout the story, they never feel unnatural, heavy handed, or forced. Instead, they feel like organic thoughts and observations are being shared between characters.

Further opportunities for reflection can be found in the general diversity of characters and life circumstances. Characters of different body types find representation, as do characters of different races. We see Asian and black background and secondary characters, as well as characters of different weights, shapes, and heights. During a conversation in the museum, Mr. Laszlo – in his familiar form of a black cat – reveals that he was in a romantic relationship with the town museum curator, Professor Folks, when he was still a human.

Family compositions are also touched upon. Both Moth and Charlie are raised in single parent households without a father, though Moth finds a father figure in Mr. Laszlo, suggesting that family is not always those related to you by blood. Heartwarmingly, this set up allows the story to focus on the relationship between Moth and Calendula. Many stories written for and about children and teens portray the relationship between the child/teen and their parents as being secondary to peer relationships. Here, the relationship between Moth and Calendula is still riddled with the friction of setting and learning boundaries but it is deep and touching, going beyond superficial interactions to a more meaningful and authentic portrayal of parent/child relationships. Readers are shown that Calendula’s actions are designed to protect Moth, even if Moth can’t appreciate that, and helps Calendula to understand her own strained relationship with her mother Sarah.

Equally refreshing is Steinkellner’s rejection of a romantic focus on Moth and Charlie’s relationship. Although it is mentioned by Mr. Laszlo as a possibility, it is not further explored in this volume.

The fifteen chapters of the story are accompanied by humorous titles that consist of puns or plays on phrases, and other opportunities for humor centered on common life experiences are included. A fun exchange takes place between Moth and Calendula on page 25, in which Moth’s sharing about her new magical powers leads Calendula to think Moth has started menstruating. The look of confusion on Moth’s face is drawn to humorous perfection.

Speech on the pages can be dense, resulting in speech bubbles that take up sizable portions of panels (page 28 as an example), but it doesn’t detract from the story and sometimes serves well to break up large and dark color blocks.

This fictionalized and fantastical take on US history is inclusive in its subtle examination of race relations and privilege, and maintains a meaningful but light touch on the topics. Those who choose not to read the story through this lens will have plenty else to unpack in terms of the relationships between the characters as either family or friends, and all the complexities those relationships can have.