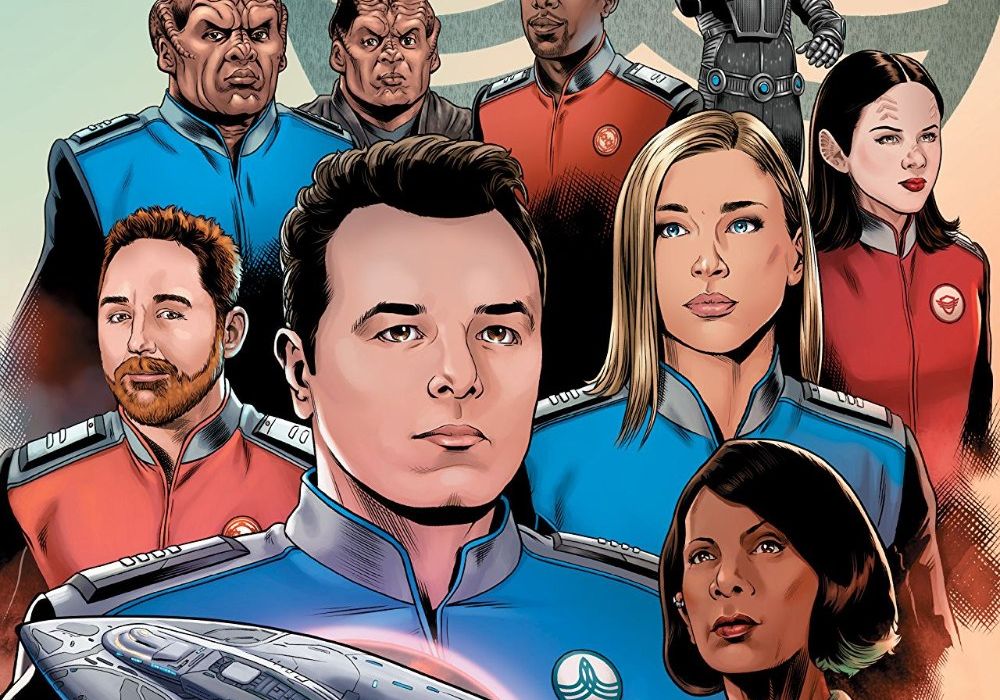 Full disclosure: I have never seen an episode of The Orville, but from the trailers I’ve seen it’s basically Star Trek as imagined by Seth McFarlane. I like Seth McFarlane, and I like Star Trek as much as the next person, so this should be fun. Mild spoilers for “The Orville: New Beginnings Part 1 of 2” ahead. 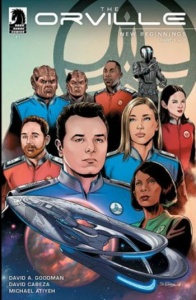 On their way to a fleet conference via shuttle, Ed and Gordon pick up a distress signal from a century-old buoy belonging to a Union ship and decide to investigate. Meanwhile, back on the Orville, Kelly tries to mediate when Bortus insists on enrolling Topa into school even though he is only a few months old.

The story of “The Orville: New Beginnings Part 1 of 2” reads like a better than average episode of Star Trek: The Next Generation. Space adventure and exploration? Check. Human crew members engaging in soap opera level romantic relationships and breakups? Check. Aliens with different cultural backgrounds leading to wacky misunderstandings? Check. Crew members flying off and crash landing onto a mysterious planet hiding some mysterious and dangerous secret that would probably get them killed in real life but will resolve itself in an hour?

As a comic book story, “The Orville: New Beginnings Part 1 of 2” is a perfectly functional piece of work. It’s well organized, the characters are engaging, there’s an intriguing mystery, and writer David A. Goodman does a great job of filling out the issue and balancing the needs of two different stories. It’s a comic with a lot of good writing and is definitely worth reading. Then again, since David A. Goodman just so happens to be the executive producer of The Orville tv show, and has written for shows like Futurama and The Golden Girls, it would make sense that he would know how to tell a good story.

Unfortunately, while “The Orville: New Beginnings Part 1 of 2” is a good story with a good writer, it kind of falls flat. While tv show bills itself as a more humorous version of Star Trek, its comedy doesn’t work very well in the comic book format.

Now, before we go on, I want to say that I understand that this is a licensed comic book and as a result, there are rules that this book had to follow and that a lot of people had to approve it before it got published. However, just because a comic book has to adhere to a set of rules and a specific creative vision doesn’t give it the excuse to be a bad comic. And while I am not saying “The Orville: New Beginnings Part 1 of 2″ is bad, I am saying that there are some problems.

David Goodman is a television writer, which means that he is probably used to certain tricks and tropes that cannot be used in a comic book. While it’s true that both formats are visual mediums and both of them tend to favor an episodic story structure, there are things that television can do that comics simply can’t. Case in point, it appears that the comic is supposed to be a comedy, but the humor mostly comes from the dialogue and timing of the story. While this wouldn’t be a problem on a television show where the creators have a massive amount of control over the flow and voice of the story, it’s much more difficult in a comic book where the reader can take as much time as they want to read each page and have to fill in the voices of the characters themselves. While the book does have one pretty good visual gag involving a race of humanoid looking chickens, most of the humor falls flat.

While David A. Goodman understands that comics are a visual medium, it seems that he doesn’t exactly understand just how much comics depend on pictures to tell a story.

Speaking of the visual medium, the artwork is kind of in the same boat as the writing. Artist David Cabeza and colorist Michael Atiyeh combine to create a solid comic that looks good and reads well. The comic has a nice, clean aesthetic that pays loving homage to the Star Trek shows that inspired it while being just different enough to avoid a lawsuit. It looks like a genuinely fun universe to live in.

However, just like the writing, the artwork is chained to its source material and probably had a long list of rules that it had to follow. This means that it doesn’t necessarily get to be the best comic it could be. There’s a lot of pages where people are just sitting in a room and talking. Again, it’s not so bad in a television show but in a comic, this translates to a lot of simple panels that look boring and uninteresting. There isn’t a whole lot of opportunity for the creative team to cut loose and dazzle readers with their very obvious skill.

Still, despite all of my rambling, the negative things I’ve said about “The Orville: New Beginnings Part 1 of 2” are small nitpicks in the grand scheme of things. The characters look like what they’re supposed to look like, the environment looks fun and interesting, and the story is solid. If you’re a fan of the show than you’ll like this comic, and if you’ve never seen the show than reading this comic will probably inspire you to give it a watch.

Final Verdict: 7.7 – A solid effort and a good story with good artwork, but slightly handicapped by the limitations of the medium and not the best comic book it could be.