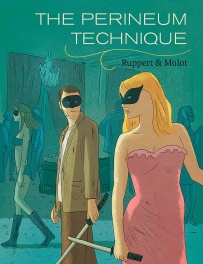 Written and illustrated by Jérome Mulot and Florent Ruppert

JH and Sarah meet online regularly for virtual hookups. Obsessed with the brevity and solitariness of their connections, JH tries to convince Sarah to meet him in person. A strange seduction ensues when Sarah challenges JH to abstinence. The Perineum Technique is a meditation on intimacy in the era of hyperconnectivity — the couple’s online encounters often begin with naked plunges off giant obelisks. Originally serialized in the French newspaper Le Monde, The Perineum Technique is one of the country’s most internationally acclaimed graphic novels of recent years, by two of its most exciting creators.

Comixology categorizes this book as “risque”, which is a word I have not read in a while. It seems an unlikely descriptor for a comic that was originally serialized in a newspaper, even if European publications are substantially more chill about that kind of thing. Comixology actually uses a censored version of the cover, which, once you see the uncensored version, hardly seems warranted. All of this to say: this comic has nudity in it, and some sex, although it’s mostly implied, and it’s not really even about sex, despite the title. It’s a weird fable about distance, and longing, and it does some interesting things with surreal imagery along the way.

So: we have JH, a visual artist. But he’s creatively blocked, and mostly focused on his virtual relationship with Sarah. They hook up regularly over Skype, and through his eyes we experience these encounters as fantastical visions: two figures jumping off an obelisk and plummeting to the desert below. JH is curious about her, but she’s reluctant to reveal anything about herself, or meet in person.

JH persists, and eventually Sarah invites him out – to what looks like the world’s most austere, buttoned-up swingers party. It’s here that she presents him a challenge: using the titular technique, don’t ejaculate for four months; then they’ll hang out again. He obeys, and they meet again, but she’s angry with him and won’t explain why.

The bulk of the novel takes place in this in-between space, with JH going about his life, shooting video for his next big project and still following Sarah’s directive, against all odds. And the book’s best visual moments happen here, as JH’s imagination goes haywire. The new project has to feature the obelisk, he realizes; the imagery he’s been looking for revolves around Sarah.

The art features delicate line work, giving only the general outlines of characters and letting us mentally fill in the rest. The poses are expressive, though, and naturalistic, underscoring the extremely caj attitudes of most of the characters, who for the most part take in JH’s story with relaxed amusement. JH’s posing is more tense, but betrays loneliness and dejection as well. And Sarah, predictably, is almost entirely unreadable until we get close to the end.

The obelisk sequences are iconic, with wide skylines and a whisper of Moebius somewhere in all the sand. Later, a nightmare sequence maybe puts too fine a point on the central metaphor of the book, but still delivers some memorable imagery. It’s all topped off by the opera sequence at the conclusion, which uses a grotesque stage play to underscore the tension between Sarah and JH.

But while the more surreal sequences are fun to single out, the book has it fair share of small moments, too. Like when JH walks up to his second meeting with Sarah, and a pounding EKG of a heartbeat skitters across the panel. Or when JH and his assistant converse in a bathtub, and as an argument picks up, they dig their feet into each others’ faces.

All the while, the colours (credited to Isabelle Merlet in an prefatory note) are punchy and addictive, spicing up everyday scenes with yellow tones and really going ham during that opera sequence.

I was expecting the book to lead up to some revelation about Sarah being exactly what JH needed – some kind of kinky, denial-based turn on the Manic Pixie Dream Girl. And while there is a suggestion of that, the actual conclusion is a bit more vague, and it surprises by revealing more than we expected to learn about Sarah. There are lots of kinds of denial, and in context her challenge for JH makes a kind of sense.

After everything, JH and Sarah are pretty much equally unlikeable, which is the same thing as being equally likeable, although JH is the more developed character for being our window into this world. The book is about his fantasy and his journey, and within those parameters, it delivers some surprises – not quite subverting the narrative of the muse, but lightly suggesting that there were two artists, and two muses, all along.