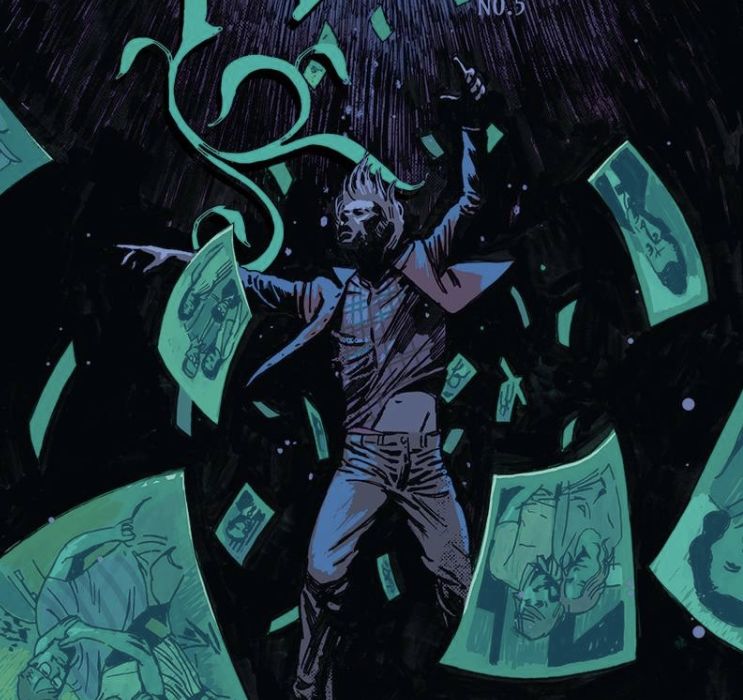 “The Plot” is back with its fifth issue and takes us on a road trip to the past, where a sacrifice is made for a bounty wholly undeserved. Seems the family’s been paying the price ever since. Warning: spoilers ahead. 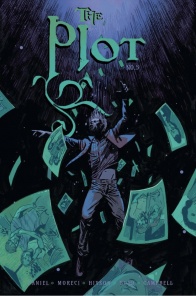 Cover by Joshua Hixson
Written by Tim Daniel & Michael Moreci
Illustrated by Joshua Hixson
Colored by Kurt Michael Russell
Lettered by Jim Campbell Discovering a journal in the attic, Chase drowns in the dark waters of his family’s history.

“The Plot” #5 picks up where issue #4 left off, with Chase drowning in the attic surrounded by the pages of a mysterious diary. Within, we start to unravel the terrible history of the Blaine family from what appears to be the origin point of generational violence. Chase’s ancestor encounters the strange bog creature after repeated hauntings, and the book’s tagline bears fruit. It’s a typical settler move, to be sure, but within the larger context of the book it’s still not clear what the team’s going for because we’ve meandered in our journey to this point.

“The Plot” privileges a creepy, somewhat static mood over progression at times. While that can work in comics and does in this book’s incidental moments, there’s a lack of connective tissue here to drive, ironically, the plot. The first four issues cover strange visitations, gruesome encounters and a whole lot of water, but it’s unclear as to what the collective hauntings mean or, frankly, what they’re trying to illuminate about Chase’s character. Daniel and Moreci circle the drain a bit on their main story thrust. Exposition’s primarily delivered through dialogue, or the frustratingly opaque side characters. We have mysterious audio tapes, a mysterious mother scribbling away in her room, mysterious flooding, mysterious figures and a mysterious disappearance, but it doesn’t add up so far because we can’t penetrate the mystery – we just shift perspective or locale. Daniel and Moreci are spreading their net a bit too wide to try and get it all in at once, from shifting points of view to incidental characters. Issue #5 gives us a bit of a root from which to untangle the morass and try to make sense, and we center on the rot at the heart of the Blaine family.

As far as artistic execution, Hixson and Russell are a good team, and they deliver on some pulpy shadows, steely visages and good ol’ bog strangulations to keep this issue ticking along. We get a good look at the watery baddie for the first time, and it’s appropriately weird, disturbing and compelling. There’s a bit more tension leading up to the moment of the murder, largely because there’s more at stake for Chase’s ancestor, and so it pops a bit more. Russell incorporates some richer tones to complement Hixson’s thick line, and it’s a nice change of pace to see a frontier flashback done in positively lurid tones (the Pilgrims would be shocked!) Hixson does the hatchet-faced starving settler well, and Russell paints the murder layouts with the perfect blend of dreamy, sick autumnal hues. Another of Hixson’s strengths, fortunately, is backgrounds, and when a book centers around a house, those skills come in handy. The surreal scene mid-issue showcases this talent, as well as Russell’s flair for high-contrast drama and deep shadows. Hixson also does a good job with rough texturing, though there are a few panels later in the book that feel too slick in comparison to their moodier counterparts. The intention is, no doubt, to paint a few moments of pristine joy before everything goes to hell, but the style feels too clean and inconsistent with the rest of the book in our digital age.

Campbell does a fine job lettering, as usual. The epistolary font chosen is readable and clear, which is a far rarer occurrence than it should be. The narrative boxes have a nice ragged paper edge without getting too ornate, and the balloons are innocuously round and blend well with Hixson’s stroke. Campbell knows how to add key, minimal details that build on a book’s style without going overboard. Good lettering disappears into the background. Great lettering enhances the book in many subtle ways, and Campbell’s work here is a good example of how to add a lot of flair with just a bit of style.

We’re over halfway through the series, and it’s taken us too long to get to this point in the story, frankly. Three issues does not feel like enough to wrap up what the team’s tried to establish with Chase, Reese and Magnus, and the bog monster imagery is so standard at this point it’s hard to determine what’s a real threat and what’s going to pop up and say “Give” in an ominous tone. That may sound dismissive, but there’s a reliance on the jump scare without the progressive tension that makes an otherwise cheesy concept like Carpenter’s The Fog work so well. The monsters in “The Plot” are not monolithic in the right way – rather, their ubiquitous nature diminishes their spooky value over time. The chops are here throughout the team to deliver a fine ending, and there’s nothing particularly off-putting about the craft involved, but so far it feels like a bit of a muddle and, unfortunately, like a lot of concepts we’ve seen before.

Final Verdict: 7.0 – “The Plot” #5 gives us some concrete story backed up by good visual craft, but it might come too late.