As ‘Endgame’ begins to wind down, some serious questions about the nature of the Joker, the line between hero and villain, and the motivations of everyone involved come into play. Be warned that minor spoilers will be discussed. 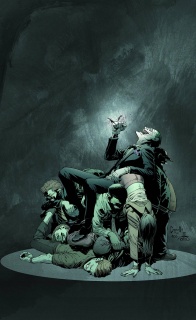 “Endgame” part 5. The Joker is back! The penultimate issue of the Clown Prince of Crime’s horrifying return! Plus, in the backup story, the inmates and Mahreen finally learn the truth about The Joker!

I remember being a kid, reading comics that made me feel actual dread. And I don’t necessarily mean because they were horror stories, designed to give a young reader a charge. No, I’m talking about an issue of “Superman” where Lex Luthor’s plan seemed insurmountable, and I really couldn’t envision a solution for Superman to get out of it. I felt like the creators had painted themselves into a corner, where the only solution was either the villain’s victory, or something so creative and outlandish that I couldn’t possibly imagine it.

Well, that’s sort of how ‘Endgame’ has felt.

In each issue, I have a moment where I say to myself, ‘this isn’t really happening, is it?’ That is, in part, due to the extreme situations that the characters find themselves in – fighting Superman in the street, being locked up by the Joker – but also because there are a number of cognitive leaps that the reader must make that seem fairly problematic (like Jim Gordon being in jail when the book jumps back to the present post-‘Zero Year,’ but not in jail a few issues later).

But more than anything, I find myself coming back to that feeling of “how will he get out of this one?” And, maybe this is the sound of a jaded comics journalist shedding that skin to reveal a pure fan underneath, that is super exciting to me. This also represents a real break from the way that comics have been made – especially DC comics – over the past decade or so.

This issue picks up with Batman and the Court of Owls ‘discussing’ the Joker. While the Court aren’t my favorite characters in Gotham, they represent the peak of Greg Capullo’s powers. Despite being a pro for many years, “Batman” represented Capullo’s coming out party for those outside of “Spawn” devotees, and it was with the Court of Owls story arc that fans really got to appreciate Capullo’s talents. There is something about the simplicity of the Court’s design that, when put against the elegant and classic Bat design, allows Capullo to do extraordinary things.

The first scene involves a large, upside down, model of Gotham, and Capullo uses this in just about every way imaginable – whether it is framing a scene in the shape of a skyscraper or using the remnants of the model as weaponry, Capullo brings astonishing, and equal, energy to the page layouts and the action within the panels.

Capullo’s other secret ingredient in the book is his Alfred. His Alfred shows so many interesting permutations per issue – his military background is present here (not just in his use of a gun, but in his comfort in doing so), as is his theater background (his posturing) and, obviously, his many years as a literal butler. (Side note: I always thought it would be fun to have n issue showing the outside world’s view of Alfred as being a terrible butler – the house is always dusty, his food sucks, clothes are always wrinkled – because he’s so busy with his Bat duties. Feel free to steal that, Scott!) The interaction between Alfred and the Joker is perfectly balanced between the Joker’s psychosis and Alfred’s determination.

The one artistic demerit I will assign to this issue is FCO Plascencia’s colors, which simply don’t hit in the way that they should on a book of this caliber. Everything he does feels muted and dull here, and not in a way that appears intentional. When the ads for i, Zombie and The Flash appear, their colorful pages make everything around them seem uninteresting, and that is a terrible thing for a house ad to do to the pages of hyperimaginative fiction that surround them. I would love to see what Capullo could do if colored by a more someone with a more vibrant palette, who would take more chances. In a book that really does push the boundaries, the colors really bring things down.

Scott Snyder has been great at writing a book that is firmly about Bruce, but finds ways to bring in his supporting cast in ways that do exactly that – support him. This issue makes great use of both the Bat-family and the Bat-villains, and brings many of them to an interesting truce late in the issue. The common theme between Batman and his rogues have always been their mutual love of Gotham, and their refusal to let anyone else have control of ‘their’ city, so this play makes total sense. The Bat family, however, always seems to be more loyal to Bruce than to any particular attachment to Gotham – they just want to help Bruce. By bringing together both his family and his enemies, Snyder and Capullo are making something very clear: this is the fight of the lifetime.

All of the characters featured in that scene are all important players in “Batman Eternal,” another Snyder/Batman joint, and I don’t think that’s a coincidence. “Eternal” is all about Batman being the glue that holds Gotham together, and the idea of Batman being one that can – and, depending on who you ask, must – last forever, this is about the converse of that. The Joker is trying to make us believe that he literally is eternal.

That is one of the many aspects of this arc that make me think that not everything is what it seems here. The theme of perception versus reality looms large in the Bat mythos, and this arc seems to reinforce that time and time again. The backup story, from James Tynion and Dustin Nguyen, focuses on the Joker, again, perverting the reality of his history by creating an alter ego for himself, and tricking a doctor at Arkham into believing it to be correct. Nguyen, one of the masters, does incredible work slowly letting Mahreen in on the secret, and telegraphing things ever so slightly, so we, the readers, are always one beat ahead of her, and can see her dread coming just far enough in advance to wince.

But back to the main story – I know that Snyder has repeatedly told us that this is really happening, I can’t help but feel that something is incredibly amiss. Again, the Joker is trying to destroy Batman – a stark change from his plan in ‘Death of the Family’ – and it seems, to me, like by playing with Bruce’s perception of reality would be a particularly Joker-ish way to do just that.

Regardless of how it winds up concluding, I must applaud the book’s sheer audacity: in this issue, Alfred loses a hand, Batman makes a deal with the devil(s), and the Joker seems somehow even more driven and terrifying than he has in the past. How’s that for a penultimate chapter of an arc?

Final Verdict: 8.8 – A gripping read that delights and challenges in equal measures.