In this issue “The Quantum Age” fights Gravitus and ends, or is that a new beginning? 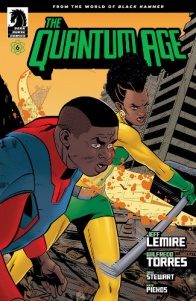 Written by Jeff Lemire
Illustrated by Wilfredo Torres
Colored by Dave Stewart
Lettered by Nate Piekos
The newly formed Quantum League set out for one final confrontation with the ruthless dictator of Earth. Meanwhile, two Black Hammer favorites reflect on their past, as the future is suddenly uncertain! Ties directly into the Eisner-Award winning Black Hammer comic books series and is written by main writer Jeff Lemire.

“The Quantum Age” comes to a close, or is it just a new beginning? This finale, unlike other entries in the Hammerverse, has left me ambivalent about the finale and series as a whole. The creative team of writer Jeff Lemire and artist Wilfredo Torres, with Dave Stewart on colors, give a sound, thematically appropriate send off but the means used to get there do not feel wholly satisfying. With these Hammerverse spinoffs, Lemire has spoken consistently about the need for an extra twist so that the final product would not just be a pastiche. In searching for that extra twist, the finale to “The Quantum Age” feels a bit too clever by half.

The funny thing is “Quantum Age” #6 on paper gives readers pretty much everything one would expect from a finale and this series, just maybe not in the order they would expect. There is a final showdown with the fallen Gravitus and effective denouement to the series themes and motifs. Wilfredo Torres gets to go action big again like he did in the first issue and contrast that with well the smaller intimate moments between Weird and Madame Dragonfly. The series has been keeping with the Silver Age design template, but when it comes time for action the artist pushes things a little bit. In particular his use of perspective and overlaying panels. Torres never pictures Gravitus as anything but the imposing tyrant he is. When the League is “captured” and sent to his quarters, Torres shows his size with a bit of forced perspective in from a thin tall vertical panel, juxtaposed against wider and squatter one, overlaying Gravitus across both of them making him appear giant. Other times he’ll use a singular big image of action and overlay smaller panels around it. This method threatens to over crowd the page and diminish the anchor image, but the reading line and macro design elements help to emphasize the strength of the core image. Constantly emphasizing Gravitus size makes the moment, a full page spread, when he unleashes his full power, and how that warps the overall presentation, land more effectively.

As the action pushes the restraints on the page, his design work for Colonel Weird as he visits Madame Dragonfly in Spiral Swamp is more an exercise in traditionally good paneling. This sequence isn’t without action, but the emphasis in the panel isn’t on the size of the action but the reactions they get. The big panel isn’t the image of Bernie making like a leaf in the wind, but the Madame’s angered reaction to the loss of her companion. As Madame Dragonfly comments on how different the Colonel is compared to his past, how assured he appears, Torres downplays the statement in the next panel. Instead of showing a strong, assured, Colonel Weird we get a tight close up on his far from certain expression to accompany Lemire’s dialog on how far from assured he is.

The Multiversity Award incarnate, Dave Stewart, continues to do excellent work in the Hammerverse. In this issue what struck me was how unobtrusive the color palette was. He plays to the Silver Age aesthetic of saturated colors, but with contemporary production, and doesn’t get in the way of Torres line work. While it certainly isn’t just flats, the blends are soft and smooth enough that nothing is obtrusive and everything is cohesive on an artistic level. Technically this is a very well done book, it isn’t a failure. The conflict lays in the philosophical side of the book.

Where things begin to feel too clever is the use of original “Black Hammer” cast members, Colonel Weird and Madame Dragonfly. It is their presence and an accessing by Lemire of assumed audience knowledge and emotional investment, that feels a bit cheap even as it beautifully informs Colonel Weird’s present state and gives weight to his personal arc. Their use as a sort of emotional short hand makes a lot of sense in serialized fiction like the Hammerverse. Lemire and Torres have also done a good job giving readers enough context clues that it should still be functional for the uninitiated. However, Weird’s personal catharsis and reunion with Dragonfly overshadows the Quantum Leaguers own emotional journeys. That shadow has been steadily growing since around the fourth issue and it feels like a missed opportunity. As in today’s comic book environment the old generation continues to overshadow the new characters. Weird’s solution to their problem is an effective and thematically fitting one, but one that is thrust upon the Leaguers not one they come to on their own.

This feeling of ambivalence is in part due to a hunger for more. The majority of Hammerverse spinoffs have been stand alone. The closest direct tie-in is likely “Sherlock Frankenstein and the Legion of Evil.” The collected version of that mini is done in such a way that it reads fine as is. These series are able to present solid self-contained narratives that do not meaningfully contribute to the Farmhouse Saga, instead adding texture to the Hammerverse. The good Colonel’s solution is an elegant intellectual solution inline with the themes of the book. It’s a solution that also happens to leave unresolved plot and in “Quantum” fashion an ending that reads as the beginning of further adventure. That lack of resolve is exasperated by the League’s lack of involvement in solving their problem. If there was another volume coming, currently there isn’t one announced, the finale would go down better.

Final Verdict: 7.0 – “Quantum Age” #6 isn’t a bad comic or poor finale, it hits the marks and dose so with a bit of flair, but some of that flair burns a bit too bright and gets in the way of what makes these Hammerverse minis work so well.

This April, Jeff Lemire and Tyler Crook will explore the weirdest corners of the “Black Hammer” universe in “Colonel Weird: Cosmagog.” The four-issue series will focus on the past, present, and future of “Black Hammer”‘s strangest hero, and tell readers what happened to Weird after the events of 2018’s “Black Hammer: Age of Doom” series.“Colonel […]