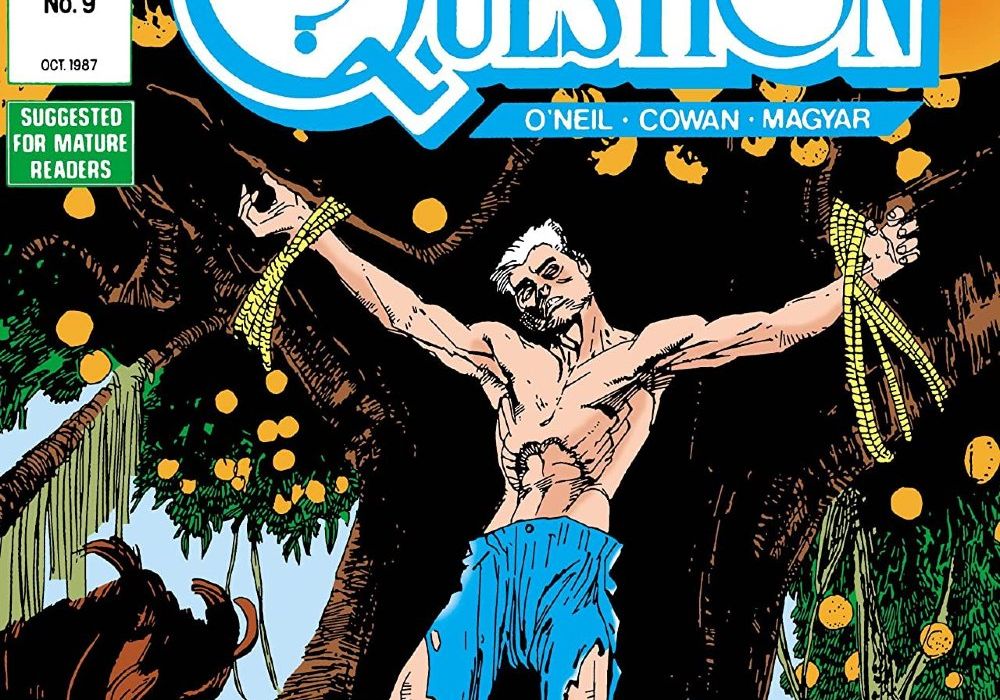 I feel spoiled by having a creative team on a superhero book remain consistent throughout the entirety of its first year. It’s a rarity now that a team doesn’t change inker, colorist, letterer or, hell, even the penciler or writer, by the end of the first arc but to have every position consistent on all twelve issues? Pinch me, I must be dreaming. 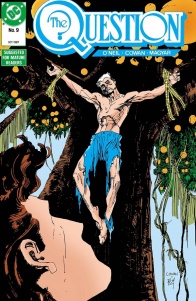 “WATCHERS.” Tot is kidnapped and only the Question can save him!

After four individual issues charting the state of Hub City and delving into the questions of what makes a city decay, what that does to its citizens, and why the rot is top down, not bottom up, “The Question” is back with a three issue arc that sees the titular hero trying to save another of his friends from the clutches of someone using religious ideas to do harm. This time, instead of a preacher talking about doing Satan’s bidding, it’s a torture-loving, drug producer who wants to become a saint to remove that inclination.

The arc ends with asking whether or not it is possible, through sheer force of will, to change something so ingrained in oneself. It feels like a bit of a disingenuous question to ask, as “The Question” #9 opens with the former corrupt copy Izzy O’Toole using that rep to bust drug runners, and the first arc was almost exclusively about the transformation of Vic but it is still important to ask. We never do get a satisfactory answer but here’s my reading. 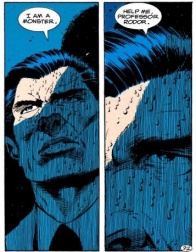 Gomez, the drug kingpin, is unable to change himself though he desperately wants to. It is only after a traumatic and transformative experience, one so immense that it destroys the lab and puts Tot into a shock based coma for, well, a long enough time for him to grow a huge beard and for Vic to get the full mullet, that he becomes a changed man. The story goes out of its way to show that a person who wishes to change can change but whether or not that can ever hope to rectify the harm caused before is unknowable. What is important is that the person is committed to positive change and that this was possible because they wanted to change. If they did not, they would have ended up like the Deacon from the first arc, unstable and, ultimately, dead.

Change and redemption is a major theme of “The Question.” The former is always possible but the latter is thornier and poses the series’ main problems. It’s hard not to draw parallels between this book and what’s going on now in the comics world, simply because we are asking similar questions. I don’t believe any conclusions I make here are applicable, however. The questions may be similar but the circumstances vastly different. Moreover, one is fiction and the other reality and it is easier to have clear answers to fictional situations.

That said, I am Jewish and Judaism is all about asking tough questions and coming to multiple conclusions so I will ask them anyway: can a person who has committed terrible acts truly change? When are the scales balanced? Is the end goal to see them balanced or is the continued work to do better more important than some karmic equivalence?

In the context of this arc of “The Question:” yes, but they must genuinely, truly want to, it cannot be forced, and the people they have harmed are under no obligation to ever forgive them or accept them; perhaps never, and even if they could, one would never know; continued work, because change never ends and it is only through that purposeful struggle that atonement can be had — if it were easy and simple, a person would never learn and change would never stick. T’shuvah is not a one step process, after all. These questions are old and will likely never have a satisfactory answer.

That is also why issues #9-11 spend much of their page count showing the world in which these questions are asked in, and on interrogating the heroes’ “goodness,” rather than directly engaging with them. Santa Prisca is indicative of the way Americans are insulated from, and cause, poverty in popular vacation spots and encapsulates the messy and tricky ways everyday evils are perpetuated, perhaps without the perpetrators ever knowing. The platonic ideal of goodness is a fallacy, according to “The Question,” and so we must work towards goodness and question ourselves to find out, and re-evaluate, who we are, as Vic does after being dosed with that hallucinogenic gas.

Issue #12, on the other hand, is a one-and-done that brings the first year of the book to a close and sets the stage for the next. Vic spends most of the page count as Vic rather than The Question. It once again addresses the theme of the everyday consequences of corporate and systemic wrongdoings poisoning the good others try to do, this time quite literally, which is more a place for reporter Vic Sage than vigilante The Question. There is the return, and end, of Baby, the mobster who shot him back in “The Question” #1 with a special pellet gun, but the more important development is Myra’s decision to run for Mayor. 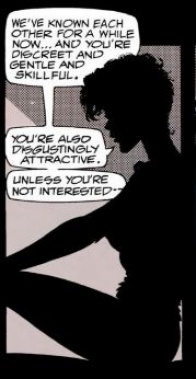 It’s a natural extension of the person she started to become back in issue #5. She’s in a position to make changes, hard changes, for the city and is willing to do the work to see those changes through. Plus, it was probably an excuse to have her sleep with Vic one last time by O’Neil but the scene was an effective one from a character standpoint and a logical extension of the two’s history together as well as Myra’s own history. It would be weird for them to permanently get together, especially after her whole vows thing, but she still has feelings for him and Fermin’s marriage is a farce and a front anyway and she knows it. But she also knows politics and getting a good roll in the hay with sex icon Vic Sage every so often isn’t something she can afford once the campaign starts.

It’s also a tasteful scene and we get some good, good male nipples, which many comics don’t seem to think are a thing when their male characters take their shirts off. That said, the following scene of Vic at the television station is decidedly not tasteful and really doesn’t sit well, though the narration portion of it is consistent with Vic’s characterization as a grade-B asshole and the culture of 80s newsrooms. Doesn’t make it right or good but at least it’s kept to a minimum and as observation rather than pure creep.

But, to not end on a sour note, let me make a quick observation about Wood’s coloring this time around. There is a marked improvement over previous issues and I particularly love the way the portal to hell in “The Question” #9 is green and orange. It’s a contrast that really feels demonic. As for Cowyn and Magyar, you know they’re always bringing their A-game and these issues are no different. There’s also a small homage to “Watchmen,” which was contemporaneous to “The Question,” at the start of issue #9, and a larger one at the end of issue #11, which is really weird to consider. 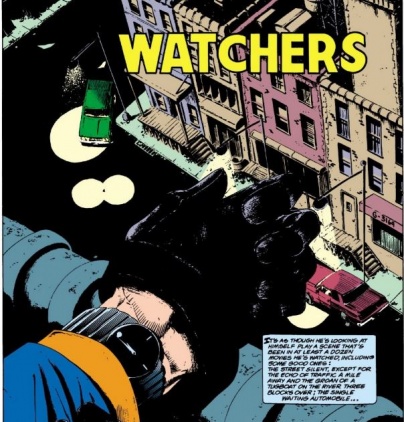 I doubt the next issues will have a giant space squid but hey, you never know. “The Question” #11 did have someone literally become a saint thanks to a rock and a particle accelerator.