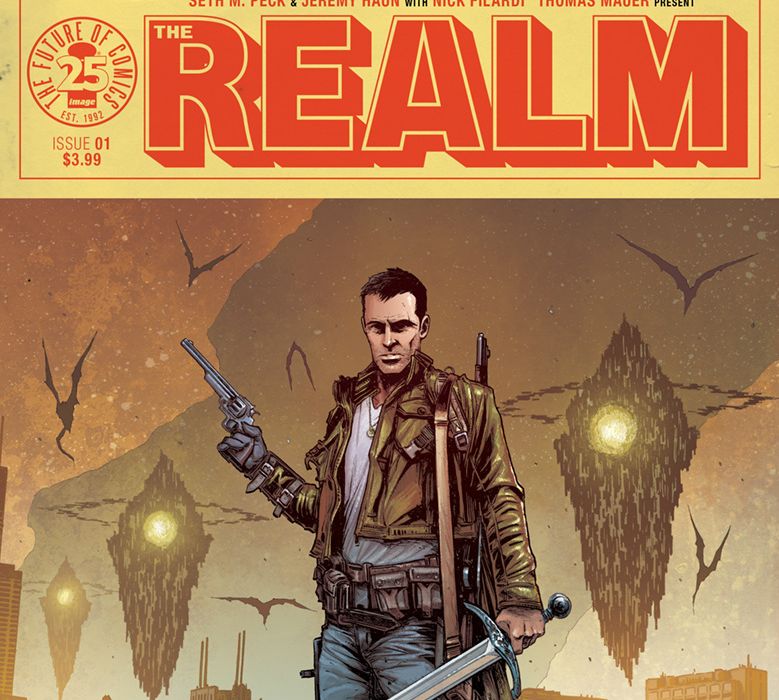 Image has been pumping up a slew of high concept stories lately, so much so that it’s hard to keep up. But in the midst of these releases, “The Realm” stuck out with me. Combining elements of Sci-Fi, Fantasy and that of the Post-Apocalyptic, Seth M. Peck and Jeremy Haun have created a comic that (on a surface level) oozes sheer style. Let’s see if the pages within continue this trend. 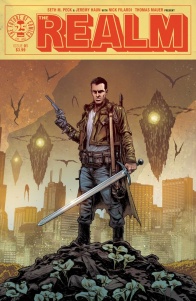 Fifteen years ago, our world was overrun by creatures of myth; orcs, dragons, and other nameless horrors threw the entire planet into total chaos. Today, the shattered remnants of civilization must fight just to survive in a deadly new era of violence and mayhem. While a powerful sorcerer marshals his forces, a group of warriors embark on a journey to reclaim our world from the growing darkness. An all new post-apocalyptic high-fantasy adventure series from co-creators SETH M. PECK (X-Men) and JEREMY HAUN (THE BEAUTY) featuring colors by NICK FILARDI and letters by THOMAS MAUER.

Peck has on his hand here a goldmine of storytelling. The melding of these two genres makes a lot of plot points feel fresh that are otherwise fresh in their individual rights. But what I appreciate is that it’s not the crux of the whole story – Peck gives us some great dialogue, character work and sets up a lot of intrigue. The standoff between our protagonist Nolan and the so-called ‘King’ at the start of the book is tense in the best ways possible. Peck has some great back and forth between the characters that although can feel a little cheesy at times (“I’D PREFER TO DO THIS WITHOUT BLOODSHED BUT WE CAN DO IT THE HARD WAY IF YOU’D LIKE”), it stands out to well-define who’s on what side in the beginning.

Peck has a deft hand at sliding multiple plot points into this issue – all equally engaging and all looking to inspire a long and fruitful narrative. The ritual scene involving what looks to be the villain of the story is subtly crafted – there’s no heavy-handed dialogue bogging down the pacing here, and there’s well-used quiet periods that really invoke tension and fear. Additionally, Peck has introduced the idea of a dark religion that the sorcerer, and presumably the rest of the invaders, bow to. It introduces another layer to the story that’s given us just enough information in the first issue that we can go wild with speculation. Are these gods intertwined with our own realm, or simply just the invading one? What is the extent of their power? Who knows, but it’s things like these that drive me to keep reading the ensuing issues.

It’s important not to rely on clichés in stories of this nature, as it can send them spiralling into obscurity fast. So, I think it’s great that Peck has written a strong protagonist in Nolan. I wasn’t expecting much from the get-go, as his dialogue seemed to imply he was something of a hardcore Rick Grimes/Wolverine type anti-hero. But Peck shows him in some very humanising moments, moments that show us yes: you should care for Nolan. About a third in, Peck has Nolan meet back with his employer, discussing the outcome of the task he wrapped up earlier. You can tell through the dialogue that both seem to share genuine concern for the other’s wellbeing, immediately setting up relationships that can later be bent, twisted and/or broken. At the end of the issue as well, we get something a little more on the nose but interesting nonetheless: Nolan appears to be possessed by a demon from the invading realm, which he struggles to keep in check. It puts all the previous struggles and character traits in a different light once we realise he’s fighting to keep this in at the same, which makes for a terrifically fleshed out protagonist only in the first issue.

I’m not super familiar with Jeremy Haun’s art – before this, I’d only seen his cover work on “The Beauty” at my local comic shop. He has a gritty, yet intricately beautiful art style that fits this book tonally to a T. What you’ll notice straight away is how compelling the visual world of “The Realm” is. The start throws you through a few similar beats, sure – we get the barren highways, the overrun shopping malls, all things that are familiar and maybe overdone, but still do a great job at letting you know this is a post-apocalyptic world. Everything really charges up once we see the city open up after this initial scene – these huge, ominous floating towers hang ever-present in the sky above protagonists. Not only this, but everything has a fantasy-tinged graffiti (of sorts) marked upon it. The King’s hangout is marked by a pseudo house sigil, hanging above his throne in cloth. Survivors use a combination of swords, bows and other ancient weaponry to combat the threat at hand. It’s all great at showing you what this world has become, and what form of threat is harming it.

Haun brings some excellent design work to the table here, too. His style works at bringing high-fantasy down to a gritty level, and this emphasises a lot how the characters look and move in his world. The King at the start of the book, although essentially a throwaway villain, looks like a dishevelled, homeless king, yet the crown he bears betrays that he’s not without imagination or power. What I found most striking though was the villain in the ritual scene – he’s adorned in the usual skull headdress and has tattooed flesh, yet he’s wearing uncannily a pair of black leather skinny jeans. It’s such a culture clash but it just works so well at placing this book, and effectively makes the statement ‘I’m not of either of these worlds’.

Truly, Haun knows how to pen a smooth, well-paced action scene. The bookending fights stick out to me the most, and shows Haun’s mastery of this visual medium. The first one feels like a twist on a Jason Bourne fight – we get dramatic eye closeups, and epic standoffs. But what really makes it work is the accentuated moments. There’s a panel of Nolan deflecting a sword with his cursed hand, and another of him delivering a sharp roundhouse kick to an unsuspecting pleb. It’s on par with great action movies, but it doesn’t stop there. Haun has a scene that introduces a new player to the book, an orc assassin of sorts, as he chases down prey. Each page of the scene throbs with tension, and each moment is well constructed – you get a panel-to-panel sequence flicking back and forth between orcs running through a dark tunnel and the determined, skull-faced assassin. It’s tense and fast paced in the best ways.

The world of “The Realm” might feel like a gritty analogue of “The Walking Dead” if not for Nick Filardi’s colors. Shots seem to glow magically as the reader stumbles upon them. The first panel showing the King’s camp has a soft glowing green horizon in the background – one that’s aesthetically beautiful but at the same time, telling that this isn’t the world you’re used to. Then there’s some other subtle palette changes. The standoff takes place when the sun is at a warm orange – a nod to western standoffs at sundown. The ritual scene takes place in a hue of dark, haunting blues. Everything feels well-crafted to convey emotion in the reader, and Filardi pulls out all stops.

One week ago, I’d probably tell you that I didn’t care much for the idea of “The Realm”. Now that Peck, Haun, Filardi and Mauer have taken me hand in hand in their original, well-thought fantasy, I’m on board for the ride. The creative team are seeding things that look to pay off in the long run, yet aren’t losing focus on crafting a great debut issue either. Make sure you keep an eye on this one.

Final Score: 9.0 – An inventive genre mix-mash that feels genuinely well-thought out, “The Realm” is a stylish debut issue that thrusts you head-first into its gritty, yet fantastical world.