Simplicity is something that often gets overlooked in the world of superhero comics. The ‘new approach’ is frequently favored over just telling a good story. Luckily, Archie’s Dark Circle line is bringing the, somehow novel, approach of just making damn good comics, and by bringing their previously successful “The Fox” into the fold, they continue to build a line that is building to one of the best in all of comics. Check out our spoiler-free advance review of the series debut! 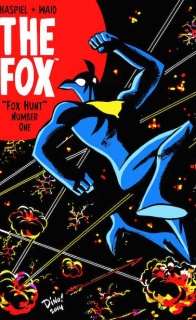 THE FOX is BACK! Emmy Award winning writer/artist Dean Haspiel (Billy Dogma, HBO’s Bored to Death) is once again united with Eisner award-winning writer Mark Waid (Daredevil, Thrillbent) for FOX HUNT: Part One “The Situation”: When a billionaire philanthropist prepares Paul Patton Jr’s home town for demolition, our hero is sent on assignment to photograph the event. But what strange force lurks in the shadows, and why will it take Paul’s alter-ego, THE FOX, to stop it? The answer is the beginning of a deadly FOX HUNT and you won’t believe what happens next! Don’t miss the debut issue from the critically-acclaimed team that brought you THE FOX: FREAK MAGNET, featuring FOUR all-new variant covers! With art from Dean Haspiel, David Mack, Thomas Pitilli, Ulises Farinas and Chris Samnee!

While this is the second arc of the Waid/Haspiel run of “The Fox,” this new ongoing provides enough clues and background to fill in a brand new reader into the story, which is this: Paul Patton Jr, son of the original Fox, has taken up the mantle of the hero, and fights crime, reluctantly, while also being a photo journalist. He is a family man, and he is constantly struggling between doing what is best for his family, and what is best for his city.

What this issue does so masterfully is that it tells a quintessential superhero story, but removes nearly all of the superheroics. When we see Patton suit up as the Fox, he is almost instantly dispatched and unmasked. This is such a far cry from the typical unstoppable hero that rarely, if ever, fails. There’s no false bravado (or, really, any bravado), there’s no powerful punch, there’s almost no element of actual heroism, but that doesn’t mean that Patton isn’t a hero. He is a sympathetic husband and proud father; he thinks of the good of others before his own; he sees a criminal not just as a problem, but as a lost soul.

The reason that this all works, undoubtedly, is Dean Haspiel. Haspiel, a cartoonist who won an Emmy for the opening credits of Bored to Death, is one of the finest illustrators working today, and this issue reminds you of that at each turn. His Fox always looks slightly goofy, with the requisite floppy ear, and his managing of facial expressions is so refined that the book could practically work silently. His eyes are the key to his work- from the Fox’s plain white discs to the pain and longing in the villain’s, every one tells a different story.

His visual storytelling is both kinetic and smooth, allowing the reader to leap along with the Fox, while still having beautiful moments of pause and reflection. Shinji’s side trip to the church might be seen as just an excuse to give Paul some time by himself, but Haspiel uses the moment to draw a beautiful stained glass window, and let the reader take a breath before the breakneck conclusion of the issue. Haspiel’s pacing is masterful, allowing each scene the proper room to breathe without settling into boredom.

Waid is scripting the series from Haspiel’s plot, and Waid slides right into Haspiel’s voice. So many of the internal monologues are reminiscent of Billy Dogma, Haspiel’s fictitious alter ego, who fights for love and pride in psychedlic adventures that take the reader on journeys through the subconscious, past the id and back again. The one knock against this, if it can even be called a knock, is that at points this feels like a tamer Billy Dogma story. However, the audience for the Fox may not even know that Dogma exists, so that is a truly minor gripe.

I am purposely being vague with many of the plot points, because the issue hinges on a character from Paul’s past making a return, but I don’t want to spoil it. The scenes, both in flashback and in modernity, are touching and nuanced – there is never anything but total humanity in each character, from their motivations to their actions. It is rare that an antagonist is given such a heart, but Haspiel and Waid deliver in spades.

The last few pages are where the rest of the arc starts to shape up, and while it makes for exciting comic booking, I fear that much of the heart from the issue will be lost if the relationships are more traditional. However, I have no doubt that Waid and Haspiel will inject each character with the humanity needed to elevate future issues to this one’s level.

Final Verdict: 8.2 – Overall, this is a great start to the new ongoing, and should be a must read for fans of both creators, the characters, and classic comics alike.