You guys! “Secret Six” is back, and its maestro Gail Simone with it! Does the new series live up to the stories of the team we loved in the past, or does it succumb to the struggles many titles have seen in the brave New 52? Let’s take a look. 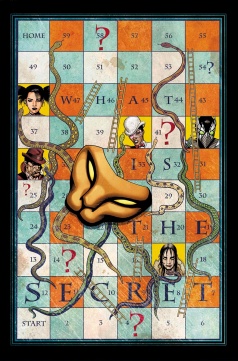 Gail Simone is back with the NEW 52 debut of the fan-favorite team–THE SECRET SIX! Six strangers are brought together under mysterious circumstances for an explosive first issue that will leave everyone asking, “What is the Secret?”

It’s really unfair to compare a book volume to volume. After all, different times and different places bring different results, so comparing “Secret Six” to previous iterations – even with Gail Simone involved – isn’t a worthwhile thing to do, especially considering it’s part of the New 52 and there’s no real continuity to build off of. There will be many comparisons across its reviews to what came before it, but like the team locked in a steel coffin at the bottom of the ocean, we’re going to be focused on the now.

It’s a good thing, because even compared to a regular, run of the mill DC title, “Secret Six” is a mess.

I saw someone on Twitter yesterday say this issue reads like a mash up of “Saw” and “Suicide Squad”, and that’s a very apt description. Like with the latter, it’s all about a group of ne’er-do-wells partnering up for the point of survival, and like the former, it’s needlessly dark and mean spirited.

Whether its the gruesome dispatching of an enemy agent or basically everything that comes from Thomas Blake’s mouth, this is an endlessly unhappy book, with the only source of happiness comes from a new team member, The Ventriloquist, who is only happy because she’s completely certifiable. It’s all posturing and tough guy (or girl) one-liners with very little depth, delivering us a lineup of the usual suspects without any real reason to care about them.

The central premise is that six villains/anti-heroes have been trapped together and that together, they must figure a way out of their situation. To make that work, we have to be given a reason to care in the slightest (besides any pre-existing affinity we may have had for these characters), but whether its through The Ventriloquist’s insane grossness or Catman’s surly disposition or Strix’s two-note nature, the reader is given no reason to want these people to survive or, for that matter, to pick up the second issue.

Beyond that, Ken Lashley’s art fluctuates wildly from underdeveloped to overwrought. In the first half of the issue that takes place in what I’m pretty sure is supposed to be the bar from “From Dusk ‘Til Dawn” (if they franchised to New Mexico), everything is overdrawn, overinked and overcolored. We’re given a cacophony of visuals throughout the section, which fluctuate from unfinished backgrounds with very flat colors to heavily inked activity upfront that I feel is designed to make the foreground pop, but instead makes everything feel overly busy.

The latter half, on the other hand, is sparse by nature, but ultimately is visually uninteresting. Because of the nature of their shared metal coffin, everything – even in bigger set pieces – is given a flat, non existent background to work with. Due to that, there’s very little depth to the imagery, removing any dynamism from the pages whatsoever. Even beyond that, some of the characters are malformed or missing faces at times.

If that sounds jarring, it’s because it is. The first half and the second halves almost feel like they’re done by different artists, that may well be the reason. There’s two inkers on the book – Lashley inks himself and Drew Geraci inks him for part of it – and if I was a betting man, the switch took place about five pages into the section with the team. The first half had heavy ink washes to it that felt very uniform, and the latter half felt more like someone trying to impersonate those washes with little success.

The sad thing is, both of these halves have merit, and if the art team was able to find a way to meet those two halves in the middle, they might have something there. Right now, however, it just looks messy and disparate.

There are an array of other issues with the book, but let’s not belabor the point: this is not a very good comic. By far the best part of it is the front cover, which “Villains United” artist Dale Eaglesham made the book look far more interesting than what we were met with on the inside. As of right now, all of the character and charm reader had hoped for from the series has been replaced with what we’ve seen from much of the New 52: unlikable characters, in-your-face interactions and problematic art. Could the book figure it out? Maybe. Could it find its way to a better place in the future? Sure. The secret to this book may in fact be that it’s a slow build to where it needs to go.

But I can tell you this: if it is, that’s one secret I won’t discover.