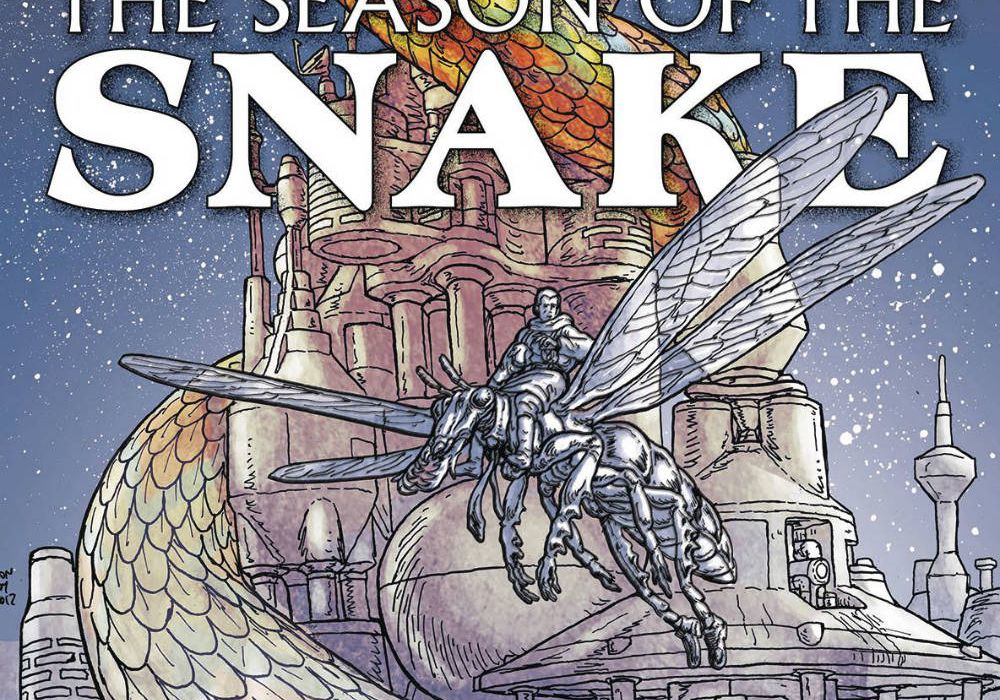 Statix Press have been doing a superb job bringing lesser-known Euro sci-fi to our Western shores, now adding “The Season Of The Snake” to their publishing library. Written by Serge Lehman and illustrated by Jean-Marie Michaud back in the mid-2000s. But does this title have enough to stand on it’s own amidst the crowd of other great sci-fi titles? 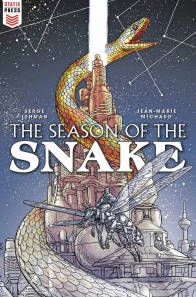 In the intersection, order is key. Having connected solar systems to one another through a series of space tunnels, humans have managed to conquer the universe. But long before humans dominated, there were native species, and after thousands of years something is waking up…

The first thing that’s obvious about “The Season Of The Snake” is that Serge Lehman’s work here is a slow-burner. This is a 70+ page debut issue, and it milks that content for all its worth. Lehman has created a world filled with copious races, political strife, intriguing work forces and high-concept science fiction at its finest. What’s good is how Lehman chooses to unfold this story, in a way that makes it more digestible to the reader. We start off introduced to a new recruit at the intersection, Derec Finn, which gives us a fresh pair of eyes to experience the world with. Through Derec Finn, we see the celestial and pregnant Diane Bendix, the subconsciousness-within-a-machine Xtalassar, the insectoid, hive-minded Mediator Jarmil and how the prior two characters rev themselves into a heated deathmatch upon meeting. In a way, having Derec Finn introduced first works as a disclaimer for the rest of the story: if all these fantastic experiences don’t make sense straight away, don’t panic. It’s just your first day on the job. It ties back into the idea of this series being something of a slow burner, but patience and an attention to detail will reward readers with insight and complex, layered story.

At the heart of the issue, there’s two stories being told – that of the mystery of the note that caused Gordo Finn’s death, and the origin and development of Lehman’s world. This is where Lehman’s storytelling becomes fascinating, as both stories weave in and out with each other. Each time the narrative stumbles upon a plot point relating to the world – for instance, Hart and Hauer talking about a deeper connecting with everything happening and bringing up ‘chutes’ causes the next page to revert to a pan of the solar system with an overhead narrative talking about the introduction of chutes in the universe and how they act as universal transporters. They fit well into the story, only occurring at points of natural transition and acting as an interlude of sorts, or engaging annotation to the densely structured world this story takes place in.

Even more interesting are how the characters work. Having such a large canvas to work with, Lehman introduces a plethora of characters to add to and create a diverse cast right from the get go. There’s the previously mentioned Derec, Diane, Xtalassar and Jarmil, who are joined by female intersection worker Rhea, and the two detectives Hart and Hauer who function primarily as the support cast. We learn a little about each from the start of the story – Derec is a placid fellow but is headstrong and will abide by his job role, Diane is graceful as a Star Celestial yet not hesitant to jump into action, and Jarmil, mostly operated by his Queen-Consciousness, is peaceful and reasoning, yet when operating under his own psyche, is childlike and joyous. We see segments of each characters personality more and more until the advent of the snake occurs, in which we see a brief personality reversal – Derec becomes lewd and lustful, Diane is bloodthirsty and arrogant, and Jarmil is dismissive of his Queen-Consciousness. In a way it gives us a total round view of the characters, having seen what they act like on the surface and what feelings they repress when the Snake event causes them to act upon these ideals.

Jean-Marie Michaud is an artist with entire universes situated within his brain. That is what I can surmise from taking in the first issue of “The Season Of The Snake”. The worldbuilding and setting work in this debut issue is on an exceptional level, with so much content and intricate architecture being woven into every panel of a page. There’s so many instances in which I had to sit back and take in all the thoughtfulness poured into the art. On the first chapter-page, we get a full spread of a circular citadel suspended amidst a bottomless canyon, with businesses, hotels and other beautiful architectural cites being built into the walls of the canyon. Then we move further in and see a scene with a complex star-map in a circular station reminiscent of NASA but with sublime aesthetic. Turn a few more pages and you’ll see a scene of the world’s transport system, reminiscent of suspended bullet trains with traffic lights and pedestrians intermingling pleasantly amidst it all, on a backdrop of holographic advertisements and ‘chute’ warp holes. All of this is merely in the first 13 of 72 total pages, which might give you a little insight as to Michaud’s sheer endurance and imagination. This book is supremely planned out and intricately researched upon.

One thing I tend to find in art of this scale is that more emotive and intimate sequences are often lost within the hyper-intricate pencilling. That is, for a large amount of content here, false. Michaud spends time especially on character debut moments focalising the camera upon them to allow the reader to remember and adjust to their often-unique appearances. Diane Bendix’s first appearance in the comic immediately gives you a sense of cosmic grandeur: Michaud draws her materialising in from thin air, arms spread either side like a messianic figure. We then spend a few more panels close with her, appreciating her soft, warm face and always-pleasant expression. When we interact with the detective Hart and Hauer, theirs is often a look of dedication to their practice, but coupled with frustration and curiosity. It starts to get a little vague when depicting Jarmil. Obviously, this one is a tricky task due to Jarmil having a chitinous insectoid head, and Michaud chooses to fully embrace that, not including furrowed brows, angular eyes or any other distinctly human emotional indicators. It sacrifices character work for realism, which I wasn’t totally on board with, but we do get some telling information through body work: when agitated, Jarmil’s limbs with be chittering or widely-spread. On the whole, it works well within the aesthetic of the book, but makes it hard to read such an especially important character.

For the most part, Michaud keeps a color palette of heavy and moody blues and greys. It’s an understandable decision considering the sheer content presented, but also feels reminiscent of the factory and strictly run tone of the society. It also puts more focus on the linework in big setting scenes, simply adding extra depth in the form of blue, painted shading to really make a panel pop. However, Michaud uses color in the form of a plot device: whenever the Serpent’s influence is present, scenes will turn vibrant and colorful. It’s unexpected considering most of the story up to a point is monotone, but brings the readers right back into the fray, especially if they weren’t paying attention. It works best whenever the two palettes blend together, like with the head of the Serpent’s riot standing in front of an electrocuted sky, with vivid red, yellow and magenta highlighting their sheer aggression.

“The Season Of The Serpent” is immensely satisfying. Every aspect of the story rolls forward with momentum, telling more about the characters, the universal origin of the story, and the complex environment to a point of intense climax, in which everything is spectacularly inverted. It’s a lesson on how to maximise a large canvas, and a real showcase of research and hard work. Couple that with an artist who paints an incredible cityscape every few pages, and this makes for one hell of a sci-fi comic debut.

Final Score: 9.0 – Serge Lehman and Jean-Marie Michaud pore their souls into “The Season Of the Snake”, creating a sci-fi that’s superbly paced, complex yet compelling and visually breathtaking.