It has been three years since David Aja last published sequential artwork, in the final issue of his run on “Hawkeye.” Now, returning to interiors after doing covers for a while, Aja has teamed up with Ann Nocenti, and created one of the best issues of the year. Read on for our review but beware as there will be some mild spoilers. 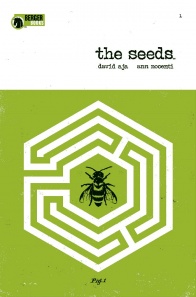 Written by Ann Nocenti
Illustrated by David Aja
In a world much like our own, people are smashing their phones and moving to the lawless tech-free Zone B.

A few cantankerous aliens have come to collect the last dregs of humanity’s essence for the celestial embryo bank. One of them falls in love.

Astra is an idealistic journalist who stumbles into the story of a lifetime, only to realize that if she reports it, she’ll destroy the last hope of a dying world. How far will she go to get her story?

There are a few panels within “The Seeds” #1 that are almost ambiguous images, like those pictures of the rabbit and the duck, or the Rubin vase. These are images that sit at a point between two things. At first, you look at them and you might see nothing. Then as you stare, one of the other of the two images starts to come into focus. But you cannot understand the full image until you’re able to see both. There are panels in “The Seeds” #1 that work like this, moments that drift from one scene to the other, where David Aja has created an image that perfectly leads from one moment to the next. But “The Seeds” itself is like one of these ambiguous images. It may take a moment, before the book clicks with you, and even then, there are still probably layers that you are missing.

“The Seeds” is 32 pages long, stuffed full of nine panel grids, and yet every single image feels purposeful. Every panel, every caption or word balloon, all feel like they are necessary parts of the story that could not be removed without taking something away from the experience. That’s not to say that any part of “The Seeds” #1 is straight forward. For the most part, it’s anything but. Like I said before, there are moments in this issue where Aja’s art work is purposefully ambiguous. Is it a person holding a phone, or two people embracing? Both, of course, but the art is able to simply convey these complex images. The reason this works so well is his art style. It’s simple, an almost photo realistic style with relatively few actual lines.

Like Aja’s artwork, “The Seeds” #1 as a whole is able to create something spectacular and real with relatively few details. The location of “The Seeds” #1 feels real and fully formed, and yet we are never given any huge exposition about what is going on. There is a wall, there is an area outside the wall where people do not use technology, and inside the wall feels like some kind of cyberpunk dystopia. And yet, with these slight details, Aja and Nocenti are able to craft a world for their characters that feels lived in and realistic.

This issue also includes fantastic work using a nine-panel grid. There are lots of modern comics that use a nine-panel grids to indicate that they are very mature comics that one should be sure to take seriously. Of course, “The Seeds” #1 actually is both of these things, and it uses the grid to its full effect. Expanding panels only when needed for breaks in the story, using the grid to create a powerful sense of deliberate pacing. This isn’t even getting into the other aspects of Aja’s art. The coloring, which uses three colors, black, white, and a dingy green, but usew dot shading to create the feeling that there are actual shades to these colors, and makes the entire world feel washed out and bleak. There is the lettering, also done by Aja, which is so closely integrated with the art in a way that most lettering isn’t. Aja uses different fonts, different effects depending on the moment, and it all blends together almost perfectly.

The story itself, as I’ve mentioned, is layered, dense, and a bit vague. For that reason, I don’t think it will be for everybody. There is a reporter that wants to be doing hard hitting news but is being told to write clickbait, a young woman without the use of her legs that is falling for a masked stranger, an alien plot to collect seeds from earth, and something to do with bees. All of these pieces feel disparate, but at the same time connected. By the end of this first issue, the many threads that have been laid out start to coalesce in a way that makes me excited for where this series is going forward. Obviously, it’s impossible to tell from a first issue whether the entire series is going to come together. There’s no way of knowing if the seeds (get it?) that were planted in this first issue will grow to fruition over the course of this miniseries in a satisfying way.

But, even if the plot of the story doesn’t come together, the way that this issue is told makes me think it will all be worth it anyway. The storytelling on display in this issue, the way that Aja and Nocenti have married their words and pictures, is next level stuff. Any sequential art from Aja is something worth celebrating, and the level of detail and craft put into “The Seeds” #1 is astounding. This is comic book storytelling at its absolute finest, and you should definitely check it out.

Final Verdict: 9.5 – “The Seeds” #1 is dense but rewarding. The artwork by David Aja is fantastic, and as whole this issue is comic book storytelling of the highest caliber.