The superstar team of Ann Nocenti and David Aja left a huge impression with their timely creation, “The Seeds” in its debut issue. Does the talent continue into the second chapter? 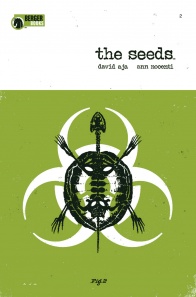 In which a spaceman overshoots his mark, the Queen Maker arrives, the bees are fed up, someone is kidnapped, the American Dream gets feral, the alien Race is buried in the quicksand of love, and the secrets of the zone are revealed.

Nocenti starts to intertwine the two major plot threads of the humans and the aliens in this second issue. Along with having Astra as the focal point of the human journalists, and Lola as the human closely associated with the aliens, a third thread is introduced, an older farming couple who serve as a metaphor of sorts for how the aliens treat humans and other lesser races. Nocenti cleverly gives them a charming relationship as older, self-sustaining farmer types to give us something to care about as readers, humanizing them as likable people. Then Nocenti lays on the metaphor about these people butchering their pig for meat, talking about their connections to the animals but still accepting the inevitable loss of life in these situations. Nocenti parallels this closely when we see Astra being dissected by aliens, who discuss methods on how to approach the situation like she’s unable to understand them, like a pig to humans. It’s a fairly original point of view on portraying an alien race’s relationship to humans, and Nocenti plays it well, making both sides sympathetic.

Characters in this issue continue to be developed in interesting ways. The most understandable and normal arc continues to be Astra, arguably serving as the focal point for the series as a photographer-journalist looking for proof of aliens and humans intermingling. Her motive is simple and relatable: she’s hunting down the truth, and something that’s never occurred in her society before, but she’s also ultimately working to get by. Lola is a little more complex and interesting to follow. Nocenti paints her as dismissive of the societal norms around her, which is most evident by her intimate relationship with the alien, Race. Not only this, but she seems to have accepted the inevitable nature of the end of her world. It’s evident in the first sequence when she asks Race “Got anything that’ll get me high?” and later as she discusses all the physical signs of the world dying, all the while smoking carelessly through an apple.

Even further, there’s Race. The most human of the aliens, Race appears to be the classic case of being smitten with the opposing, or in this case, inferior class. He sympathizes with Lola and the human cause, yet still accepts that his reason for being on Earth is due to its end. Nocenti seems to use this to keep his true motives unclear, making him one of the most intriguing characters as he may have an ulterior desire we haven’t seen yet.

With this second issue, Aja continues to prove he’s a veritable industry juggernaut. The visual imagery here is subtle and fantastically done. The sequence of the turtle walking through the desert on the first page, only to get trapped by a six-pack wrapper is a great study of patterns, conveys a solid eco-treatment message and implies the relationship of a higher race to a lesser or inferior one. Then Aja delivers one of my favorites in the second sequence between Lola and Race. Firstly, we see the previously mentioned turtle being freed from the wrapper by Lola, a clever showing of intervention from a higher race in the way that Lola can be interpreted as being freed by Race. Then, we see Lola essentially making a bong out of a rotten apple through several panels, all the while the dialogue talks about the planet dying and humans being self-destructive. It’s a powerful image of something born of nature being corrupted by humans for selfish purposes, and Aja makes it all work with his signature simplistic style.

Aja fleshes out the alien-controlled world he created in the first issue further here. There’s lots of great setting work in place here, with enough little details to make the world feel legitimate and terrifying. When we first get to the safeguarded zone, we get a closeup of the SAFE (Security After Fallout Event) logo on the side of a gun turret, a great use of irony in the environment. Then we zoom out to see the setting to be something of a fortress, with turrets marking the barbed wire fence and fliers and posters on most free surfaces. I love too that the inside of the alien’s storage house looks like the classic Area 51 stereotype, lined with boxes and test tubes filled with embryos and other creepy objects. It lends a sense of the old school alien-invasion aesthetic, yet updated for a sleek modern audience.

The most unique setting occurs about two thirds into the story when Astra stumbles upon the Luddites’ land. The scenery is a modern artwork of suspended camper vans and broken down scrap metal, with the earth cracked and dry and people wandering through it aimlessly. It’s the most telling scene of the book and gives a good summary of what society is like in this time and context.

With “The Seeds” #2, Ann Nocenti and David Aja continue to show that they’re not strangers to this craft. Nocenti handles three separate plotlines in this issue, all with subtle yet workable ties to each other, and super interesting, unique character work. Aja handles visual imagery and metaphors fantastically that I have no doubt the story would not work with any other artist and provides fantastic, gritty environments to bring the world to life. Berger Books continues to showcase some of the best of the medium.

Final Score: 9.0 – Compelling written and visual metaphors make “The Seeds” #2 a great continuation of the mysteries of the first issue.