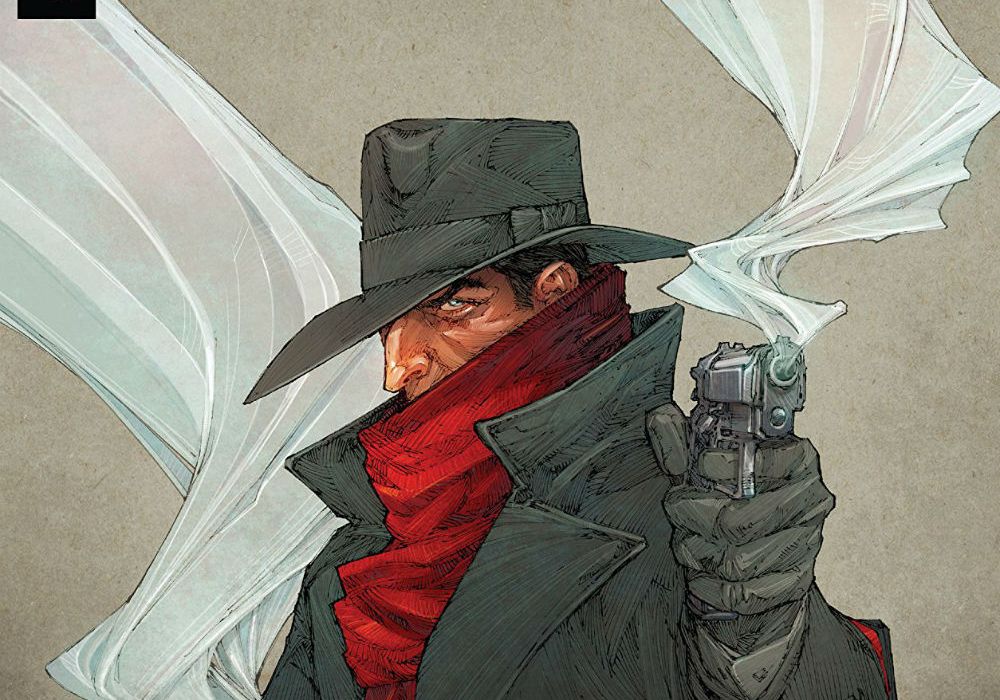 Who knows what evil lurks in the hearts of men? Spurrier, Watters, and HDR know. Spoilers to follow. 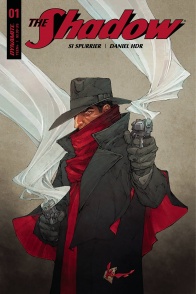 For the better part of a century the Shadow’s sinister laughter brought the chill of fear to evil-doers – but in our modern times, the streets of Manhattan have gone largely silent. But he is not forgotten. Not by the people he’s saved. Mary Jerez is one of those people. The Shadow saved her from a horrifying school shooting – Mary knows all too well what evil lurks in the hearts of men. So when a horribly burnt man – incredibly strong and fierce, despite his terrible injuries – arrives under her care as a resident at the hospital – she believes she knows who he is, too. Is this mysterious man actually the Shadow – and with Mary’s help, will evil-doers again know what it means to fear his terrible justice? Si Spurrier (X-Force, X-Men: Legacy, Judge Dredd) and Daniel HDR (Superman, Cyborg) bring the pulp icon into modern day in a tale full of deadly intrigue, gun-blazing action, and a study of the nature of evil!

Looking at the other characters who were created around the same time, The Shadow hasn’t had the same long-lasting success compared to his early popularity. Every few years a new book will pop up and disappear, but never with a lasting impact or anywhere near the popularity the character once had. With the good press over the still running “Batman/Shadow” book, Dynamite has brought the character back to his own series. And Spurrier, Watters, and HDR have made a compelling case for why The Shadow is just as relevant today as he was over 80 years ago.

Spurrier and Watters write the issue with second-person narration, a choice that pays off in spades. The present-day sequences all take place in the same room, and most of the panels are the same size and look out from the same perspective as a to-be doctor undoes bandages. She talks directly to the patient, or us, since we’re looking out from his point of view. And though it might seem repetitive, her story is riveting enough that her few movements satisfy. The perspective grounds us and gives us a reason to listen, and the story itself reaches out far beyond the hospital room we’re stuck in.

Not only does the choice of narrator give perspective on the almost-doctor’s life, it also gives perspective on the world at large. This is the world of 2017, with all the larger societal problems contained therein: School shootings, questionable justice systems, and political turmoil, all seen through a decidedly modern lens. All of this other groundwork gets effortly laid for us, and it’s here that The Shadow himself comes in.

Existing only in flashback, which Marques colors as being slightly faded, the character pops in and appears for only certain panels over a few pages, then disappears. His signature laugh signals his arrival, and the (pardon the pun) shadow of his actions hangs over the entirety of the issue. From the immediate aftermath of the event, where the school shooters face their fates, to the present day, where this brief appearance completely changed the doctor’s life and perspective, the gravity of The Shadow’s brief past actions completely make up for his lack of physical appearances. In fact, it’s exactly that lack of appearances that makes his impact so powerful.

Looking at how Spurrier and Watters have written a modern-day examination of The Shadow, there’s more going on than just setting the book firmly in the present day. They also have the narrator character talk about modern-day superheroes. She muses about how superheroes don’t make sense, how their perspectives on killing often seem like they’re editorially mandated instead of coming about as a result of character. These characters, she posits, don’t make sense for the current day. And out of this, she is able to create a new thesis for how The Shadow does. The resulting sucker-punch of a logical statement, which is indeed completely logical in the book, could only have been made inside Spurrier and Watters’s carefully constructed monologue. Further, it gives the book and character a clear raison d’être and purpose going forward.

HDR’s art sticks to a simple-but-nuanced style. Many panels, as mentioned, are framed the same as each other. It doesn’t come off as lazy, though, because of his attention to the details that do change. By making many panels almost the same, it only highlights these tiny differences, which end up enhancing the real-time feeling that this doctor is telling us the story right here, right now. Over the course of her monologue, she starts undoing bandages on one leg, then moves up to the body, then to the head. It’s slow and meticulous, it sets us firmly in the situation, and it wouldn’t be nearly as effective as it is without HDR’s pencils.

As for the flashbacks, where the panels do constantly switch things up, HDR champions directness over anything else. The school shooters shoot their guns, they look nervously around. Nothing fancy, just the storytelling basics we need. When The Shadow comes in, that directness makes his appearance all the more striking. Suddenly, he is there, fully formed, in action, larger than life, unavoidable, unstoppable. Then he disappears for a bit, causing a panic, before… Boom, there he is again, making his direct hit. This choice of such a direct style tells us all we need to know about the mysterious character.

If there’s one issue I had with the book, it has to do with the unexpectedly political roots of the writers’ argument. They pull no punches and write what they think, and great things do come out of it. But I imagine it won’t land as well with all readers, since the doctor character could be seen as a political mouthpiece for the writers. Again, they didn’t exactly cross a line here, but they will have to be careful going forward because they played it a little close to being too political.

In all, it’s been a while since I’ve read a debut this strong. Spurrier and Watters have a way of effortlessly giving you information through hard-hitting character beats, and HDR’s direct art style punctuates the aspects of the character the writers want to highlight. Best of all, they give the book a modern purpose worthy of the character’s legacy. By all means, if you have any interest in this at all, check it out.

Final Verdict: 9.0 – A riveting story that uses unconventional means to show why this book needs to exist right now. One of the best debuts I’ve read in a long time.