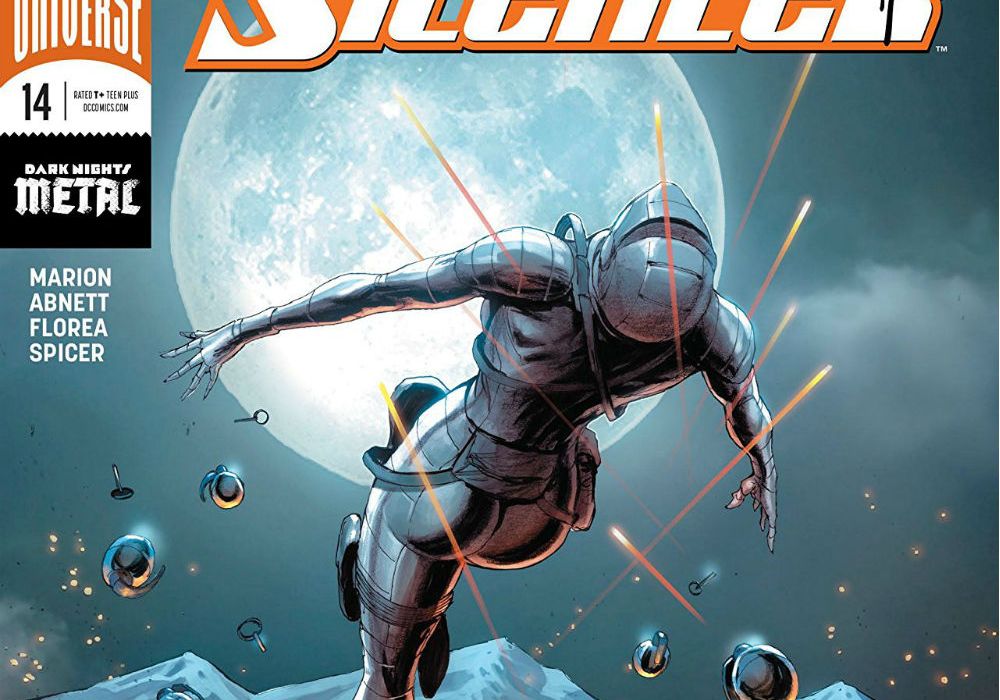 The New Age of Heroes line has had a 90s Image, or in DC parlance “New Blood,” feel to them. From these new heroes being clearly inspired by well known archetypes, to an emphasis on the artist role. This new age hasn’t taken the comics world by storm, but with “The Silencer” #14, writer Dan Abnett and penciler V. Ken Marion make a comic that reads like the right kind of 90s throwback. 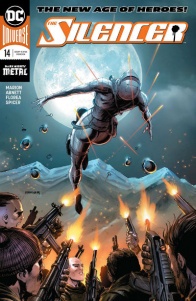 Written by Dan Abnett
Penciled by V. Kenneth Marion
Inked by Sandu Florea
Colored by Mike Spicer
Lettered by Tom Napalitano
“Agent of Leviathan” part one! The Silencer is once more the weapon of Leviathan—and Talia al Ghul has seen to it that she can never escape again. As her family grieves her loss as one of the many missing and presumed-dead civilians of the Action Land massacre, Honor Guest is seemingly unconcerned and focused solely on her new mission for Talia. But is Honor really ready to let go? Or is the game of cat and mouse between the Silencer and Talia far from over? Plus: not one but two shocking revelations rock everyone’s world.

The core plot of “Silencer” #14 involves the titular assassin going out on clean up duty for Talia and Leviathan, now that the civil war is over. That plot is functionally not to dissimilar to “Bloodstrike” #1. Unlike the start of “Bloodstrike,” the violence in the issue doesn’t exist as an exercise in spectacle in and of itself. It forms the basis for Abnett and Marion to represent how the Silencer is viewed by those around her and how she views herself. All of this and several effective cut aways towards more standard familial melodrama keeps the issue fresh. This issue and series isn’t designed to be the acute character study like fellow assassin book, “Deathstroke,” but that hasn’t stopped the creative team from doing enough solid character work that “Silencer” reads like those “G.I. Joe” comics you imagined as a younger reader.

As the Silencer works her way through Zygo’s laboratory with Terminator levels of efficiency, you begin to wonder what, if any, Honor Guest is left inside that white suit. In these sequences of in human violence, penciler V. Ken Marion and inker Sandu Florea lean into the nineties aesthetic with consistently large and detailed imagery. The credits page is a perspective bending double page spread as the Silencer kicks in a door and lets live rounds fly. Marion’s staging and Florea’s tight and clean inks accentuate the Silencer’s form and obscene technology. Unlike the nineties, the imagery dose this without falling into a gratuitously sexual gaze it is more akin to technofetichisim as technology eviscerates the body. There is also a distinct lack of cross hatching and screentoning. Mike Spencer’s color palette doesn’t play things old school either, sticking with more contemporary application and smooth blends. This is to the line arts benefit as Spencer adds a sense of dimension to the figures within the chaotic panels.

V. Ken Marion page design and blocking appears cognizant of the nineties aesthetic, without fully giving into some of the more self-indulgent and overwrought aspects such as constant giant images. For all the chaos and violence, “Silencer” #14 feels a little too restrained, though you could argue that is to the readers benefit in terms of readability. Marion designs pages in a series of boxes, that visually contain and restrain the copious amount of hero shots afforded to Silencer throughout the issue. The Silencer looks consistently “badass,” yet it is a mood that is over played with so many medium sized images. The box heavy designs is to the issues benefit in terms of readability, as opposed to the pointless scale for scale sake of “Bloodstrike.” Yet it still has a choppy flow in spots, it lacks the violent, fluid, finesse of Jon Davis-Hunt or “G.I. Joe” #21 ‘Silent Interlude.’ Better visual flow would’ve taken this issue to another level.

On first reflection, the use of muted speech bubbles as the Silencer goes about her bloody work didn’t sit right. While that lack has been a motif throughout the series, the zone of silence is clearly articulated. The blank bubbles visually clutter what would be nice clean images of Silencer at work. The images of Silencer cutting through everyone is already visually noisy, but with the speech bubbles it adds a sort of irony, the way non-diegetic music can make for ironic commentary on a moment. These blank bubbles remind the reader of the inherent screams and cacophony of noise that is being sanitized and spectacularized with the silence. It helps to lighten the mood just a bit as people get run through with bullets and swords.

The violent art in this book is largely well done, what pushes it towards something more is how it is used by the creative team to represent how Talia and Leviathan see her. The Silencer is more than a codename, the root of the word has been verbally used as a euphemism for murder/assassination throughout the series. As “The Silencer” Honor Guest isn’t a person or a mother with a family, but a tool and underlife boogey monster to keep it inline. That perspective has been audibly represented by Talia in the past, but as the Silencer cuts through everyone, Abnett, Marion and letterer Tom Napalitano turn the comic book page into the medium for this perspective. The violent ends the Silencer is delivering becomes a visual soundboard for Talia and Jonah Nine to converse over. The fact that their dialog is somewhat redundant in spots helps to highlight their disinterest in the woman behind the nanoweave visor. Once she is back on base and readers learn more concretely how much of Honor is left in there, how that information is given fits within this perspective.

As all of this is going on, the issue also cuts back to Honor’s grieving family. These diversions make for a nice change of pace and also highlight the fun, cartoony tone of the comic. Her husband is just kind of a doofus, bumbling into previously hidden secrets and aspects of his wife. Stan Beeman he is not. His bumbling and the fact that Leviathan boss Quietus has been reduced to a literal talking head gives this comic a “G.I. Joe” tonality. If Quietus doesn’t give it away, the introduction of Zygo certainly does. Having cartoonish qualities dose not excuse poor characterization, but it creates a realm where the melodrama and character work “The Silencer” is working through is consistently effective.

Much like the books title, this series has been something of a sleeper within the overall DC line. Not big enough to be a hit, but consistent enough to form a fanbase that is keeping it alive. With issues like “The Silencer” #14 it’s hard not to see why it has developed one, it isn’t a high minded exploration of the form, but is an a entertaining read with just enough depth that you can poke at it and not shatter it.

Final Verdict: 7.5 – “The Silencer” goes loud for this issue delivering an all around well done comic.