“The Sixth Gun” comes to its conclusion in a truly epic issue. 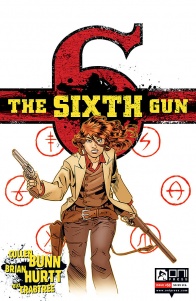 The war for creation and the battle for The Six concludes in this epic, TRIPLE-SIZED finale! This is the end.

I love stories that end and end well, and “The Sixth Gun” is definitely that. Cullen Bunn, Brian Hurtt, and Bill Crabtree have been building toward this ending for a while now. This isn’t a sudden, rushed ending; it’s carefully paced, heavy with a sense of the inevitable. Every piece in the story had its moment and the breathing room to make the most of it. You couldn’t lose a single page without the story being less because of it.

I can’t think of a more fitting way for “The Sixth Gun” to go out than in a triple-sized issue. Throughout the series’ run, the creators always knew when the story should take precedence over the page count. This isn’t the first time they’ve extended an issue, although they’ve certainly never done anything on this scale. Kudos to Oni Press for letting them do it.

If you picked up “The Sixth Gun” #1 on Free Comic Day back in 2010, then you’ve been following this story for six years now… and paying off on a six-year investment is tough, especially when there are a number of big questions that still need to be answered. And I find the way they answer the big questions interesting. When the big answers come, they aren’t framed to make you go ‘I didn’t see that coming!’ They are framed in terms of the characters and what the answers mean to them personally. The ending satisfies the plot, character, and emotional needs of the story in away that feels like the only logical conclusion. That’s a damn hard act to pull off.

And now I’m launching into spoiler territory. I tried writing a spoiler free version of this, and it ended up being a mechanical review talking around all the things I really care about.

I hope you went into “The Sixth Gun” having read everything—and by everything, I mean the spin-offs too. Up to this point, the spin-offs have explored other corners of this world largely tangential to the main plotline, but in this issue they suddenly become a great deal more important. I can’t imagine what it would be like getting to Yum-Kimil’s arrival without having read “Days of the Dead”, missing all the connections to the mythology introduced in “Valley of Death”. I wouldn’t want to want to miss the subtle nuances that “Dust to Dust” adds to Billjohn in this story, not to mention the parallels between Billjohn accepting Sally’s death and staying by her side, and Billjohn accepting Becky’s death and staying by her side. I feel that facing Sally’s mortality gave him the strength to stand by Becky in the end. That was a truly beautiful moment.

Brian Hurtt had a monumental task ahead of him here. The scale of this story is huge. After all, this is the Final War of the Six, with enormous armies on all sides. Given everything this story had to cover in so little space (and yes, with a story this big, even a triple-sized issue is little space), the battle itself could have easily overwhelmed the narrative. For the most part, the battles between the huge armies are side-stepped. They are in there only as much as they need to be and the story is all the better for it. When the Grey Witch wipes out the Knights of Solomon, the battle is a single double-page spread. The moment is both suitably epic and yet also succinct. There’s just enough on the page for the rest on the battle to form in the reader’s imagination.

The Final War for the Six may be all about the battles, but “The Sixth Gun” is all about the characters we’ve followed throughout the past forty-nine issues, and that’s where the focus is here.

When that final battle begins, there’s tremendous economy in the layouts. This sequence could’ve been overwhelmed by all the different narrative beats it had to cover, like a six-way tug of war, but instead this sequence demonstrates why Bunn and Hurtt work so well together. Throughout the battle sequence, the final panel of one scene often becomes the lead-in to the first panel of the next scene. So when Nahuel is fighting the Grey Witch in her Great Wyrm form and he gets thrown off of her, the next scene with Brother Roberto connects to that moment by showing Nahuel in the background of the panel as he hits the ground. The overlap of action connects these two scenes and demonstrates where these two scenes are occurring in relation to each other without the need for a bigger establishing panel. This may sound like simple stuff on paper, but choreographing the scenes together like this takes a lot of work. It pays off in spades though. With very few pauses for establishing shots to show spacial relationships between characters, the energy remains high from scene to scene. The pacing is fantastic.

But that’s the technical stuff. It’s the engine that runs so smoothly you don’t even notice it while reading. What does jump out is all the character moments. Having Billjohn back as a part of the team again (and able to talk!) brought back all the memories of reading “Cold Dead Fingers” for the first time. It gives the book a feeling of coming back to its beginning, and he gives a voice to Drake’s conscience in a way that shows Drake at his most human.

Having Nahuel and Nidawi back together makes for a beautiful, yet understated reunion. Nidawi doesn’t change so drastically that she’s a different person, but the walls are down. In her own way, she’s capable of expressing affection where she wouldn’t let herself before. I loved when those two stop in the last moments of that final battle and face their end together. In that moment, they demonstrated what mattered most to them when facing their end.

But let’s talk about the really big stuff. For a while now we’ve been wondering what Becky is. I must admit, I was a little nervous that this reveal was left until the final issue. With major, plot-transforming moments I like the characters to have time to live with them so that the stakes are clear in the final conflict. But the creative team have been carefully laying down the groundwork for this reveal for a while. When the reveal comes, it’s actually pretty straightforward.

In the end, Bunn and Hurtt didn’t go for shocking though. The reveal isn’t shocking at all. Instead of getting the information from some kind of grandiose oracle, it comes from a personal place, in a discussion with Drake, in a way that shows how deeply connected these two are and how much he needs her. And for me, that’s what makes the reveal truly great. It’s not big and showy. It’s quiet, heartfelt, and honest. When we get to the reveal, all that was needed was a shared look from the characters to understand the gravitas of it.

An unexpected pleasure in this story was the way this issue made me look at the Grey Witch anew. The idea that she was tired and she just wanted rest struck me as very human. The Great Wyrms may want immortality, and though Griselda shares many things with them, she doesn’t share this desire. She craves an end. Something about this reminded me that she had once been an innocent, her soul mutilated by circumstance at a young age, and she had been trapped ever since.

The other telltale humanity in her was her love for her son. Griselda wanted to recreate the world, but I wonder what desire drove her more, to create a world for the Great Wyrms or to create a world for her son? I can’t help but feel these two worlds are incompatible on some fundamental level, especially since the Great Wyrms want a world without death, and yet Griselda knows the curse of immortality intimately. I don’t think she’d wish it on her son.

This is an ongoing theme throughout “The Sixth Gun”. Death is not a curse humanity bears—it is a gift. 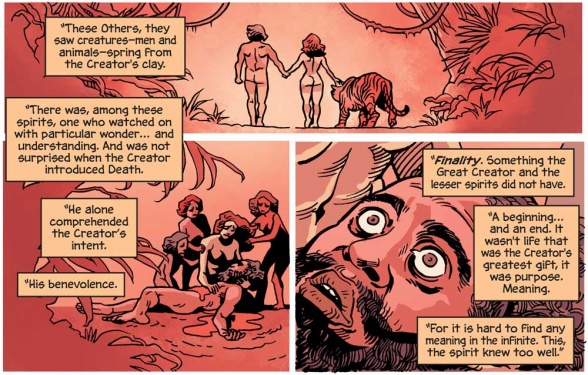 From “The Sixth Gun: Valley of Death” #1

The final scene with Becky atop the Devil’s Workshop was incredible. Whatever she started out as, she had become real, and letting all of that go to save the world from meaninglessness was her ultimate human act.

Maybe some day there might be a spin-off or two set in the world of “The Sixth Gun”, but there won’t be any more stories about Drake and Becky’s adventures. Their story is over, and as Cullen Bunn said in his afterword, returning to them now would cheapen the ending. I admire that commitment to finality, and I wouldn’t have it any other way.

Final verdict: 9.5. If you’re ever a guest in my home, it’d only be a matter of time before you’d be dragged over to one of my bookcases so that I could introduce you to “The Sixth Gun”. It’s a damn fine comic, one that I will always love. 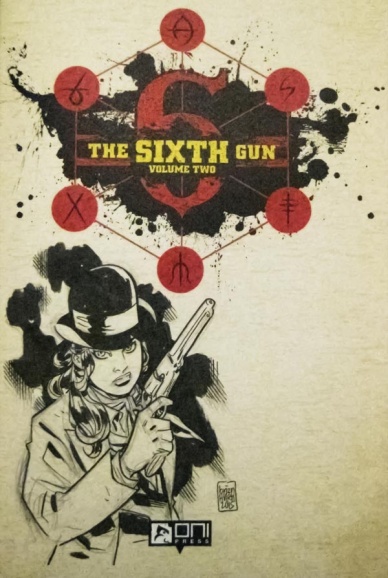