Josh Vann and Simone D’Armini’s indie graphic novel, “The Spider King,” first published in 2016, is now being serialized in single issues to a wider audience via IDW. The original was an underground hit, but will it find the same success through a new publisher? 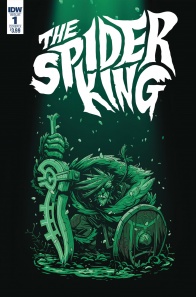 When a fleet of spaceships crashes into northern Europe in 956 AD, a group of unlikely Viking heroes are the last line of defense against a brutal intergalactic warlord. Equal parts science fiction and fantasy, The Spider King follows the adventures of Viking warriors as they defend their world against alien invaders armed with futuristic technology and impossible weapons.

Josh Vann know how to easily set up a believable and well-written world and make it all look like no big deal. “The Spider King” centers on a rivalry between two clan leaders in Viking country who regularly butt heads. But what I find so compelling about this relationship is that it’s established quickly and efficiently in only three pages, showing protagonist Hrolf’s father, Hallvard death and the son’s ascent to the throne. There’s no introductory page slamming you with exposition, or any characters over explaining things to you. Everything is shown to you as you are guided through this funeral in just three pages: the protagonist, the clan, how the clan works, the setting, and the drive of the whole story. It’s an amazing feat of great storytelling and sets up the rest of the comic sublimely.

Just as interesting as this setup are the characters themselves. Hrolf is a unique creation – he’s depicted when you first meet him as something of a simpleton, and as we see him grown up, it hasn’t done much to make him a good leader. Even still, Vann injects him with undeniable goodness and heart. He may very well be oafish, even so far as setting up a trap that accidentally causes his own people to smash and burst open their heads, but he still fights for his people with a ferocity that makes him feel like a real saviour, standing up for the lacklustre ability of his warriors. And then there’s Aarek. The tormentor as we’re led to believe from the start of the story, Aarek is responsible for Hallvard’s death, and carries himself with a dark swagger that boasts he doesn’t give a damn about it. But then Vann, in the latter half of the story, pulls a vicious one-eighty and makes you care for him as he fights for his life in the alien’s ship. Vann makes him almost respectable in his despicable nature, yelling in pride as he’s butchered by the alien and his people come swarming through to his aid.

Something that I find interesting is the pacing and structure of this comic considering the adaptation from long form graphic novel into a single-issue format. Everything fits well in this chapter, from the setup, to the introduction of the Viking clans and their quarrels, and the arrival of the alien warlord. It’s a testament to the original production of the comic that they made it fit well within these conventions even without the restrictions of a serialized production. It’s paced just as well as a good single issue too: we never dwell too much on one particular scene, yet nothing feels rushed. As previously mentioned, the prologue is only three pages, but gives us more than enough. The introduction to Hrolf and Aarek’s rivalry is just as smooth: giving us a short scene inciting their hatred for each other, and followed by a well-page of fighting before the intergalactic invasion. My only point is that the introduction of the big-bad intergalactic warlord feels a little shoehorned in: we don’t get any motivation or origin and it only gets a few pages of screen time. But on the other hand, it does give you an intriguing taster for readers to come back for more later, and there’s still more than enough content within this chapter to suffice for this.

The art production in this comic book is absolutely dreamy. Simone D’Armini has an aesthetic approach that feels reminiscent of Samurai Jack and Akira Toriyama’s “Dragon Ball” due to its crackling energy and sharp cartoon feel. What I find interesting about his style is how busy yet simple and clean his style looks. D’Armini’s artwork seems to more erupt from the darkness of the inks, a la Mike Mignola, rather than looking just drawn onto a blank page. It makes scenes like the funeral prologue look sombre and intimate, and the fight scene between Hrolf and Aarek’s army fierce and fast-moving. D’Armini’s style helps with the visual flow and reading of the book too, with the way that his inks seem to blend character, environment and speed-lines into a kinetic, sequential motion. The scene with two of Hrolf’s warriors riding tree-trunks into their inevitable doom represents this best, as the reader follows each movement diagonally down the page, until the apex on the crown of the next page.

Like the best in the field, D’Armini has a cartoon sensibility that hides realistic expression and emotional work. Every character on every page has a unique look to them and all look individual, especially if you take a minute to look further into detail. In the prologue scene, on the second page, each panel has a few character’s talking about Hallvard’s death, and each have a discernible and different look about them. One is solemn and stern, one looks scorned and bitter, one is genuine and grieving, and one looks worried for the future of the clan. What’s more is that the simplistic style allows for all these personalities to show up in a small space without feeling overcrowded. On top of these, however, are the focused, genuine emotional moments. When we see young Hrolf looking out to the night sky, it’s with a look of oafishness but star-studded awe. When we see Aarek fighting for his life against the intergalactic warlord, it’s with a look of weariness, but determination and fire. D’Armini gives his characters a realistic feel while still staying true to the overall aesthetic.

Colors here are done by Adrian Bloch who turns the whole thing into a beautiful gradient wash of vibrant tones. I feel that’s the best way to describe because as I flick from page to page, there’s a warmness to the colors, and quite a diversity in the palette too. But it never feels out of place, the tones seem to wash from sombre autumn and oranges in the funeral scene to cool, wintery blues in the Hrolf/Aarek face-off scene and lovely emerald, turquoise hues in the alien invasion scene. It all blends in really well with the inks, which make each color pop from within the page rather than feeling painted on like with D’Armini’s art. But the best part of it all? As beautiful and warm as the coloring feels, it perfectly accents the more gruesome and intense scenes, like the fade from cool blue to eye-popping pink as Hrolf’s warriors have their heads smashed together.

“The Spider King” #1 is a fiery, passionate work, lovingly crafted by hard working creators. Vann smashes together Viking history with mind-bending space invaders in a way that never feels forced upon the reader but part of the whole storytelling sequence. D’Armini and Bloch are a tour de force, presenting a slick, cartoon-like sensibility that is sharp and meaningful. Even if you picked this up in graphic novel format, don’t miss a chance to revisit this well-executed serialization.