Josh Vann and Simone D’Armini’s “The Spider King” captivated audiences last year with a sublime blend of historical Viking action and glamorous, weird sci-fi tropes. The creators set up a spectacular universe in their comic, so it makes sense that they would return to it once more, in this case with the one-shot “Frostbite”. But does the successor retain the charm of the original? 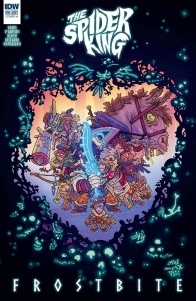 Viking warriors Hrolf, Sigrid, and the Laxdale clan continue their war against the alien invaders, traipsing across medieval Europe. Frostbite picks up where the last Spider King volume ended, as the clan make their way through an ominous snowstorm and are attacked by swarms of biting, fighting, talking animals.

The closest parallel for this comic that comes to mind when reading it, funnily enough, is Mike Mignola’s “B.P.R.D.”. If you look at the bare structure of this issue, you’ll be able to see why. A group of people with strange talents often stemming from foreign objects travel from place to place to fight off a foreign (in this case, alien) threat that has taken over a segment of the countryside. “Frostbite” is a great done-in-one story that shows the Laxdale clan encountering an alien entity capable of possessing nearby creatures. What I love is that even though this is a chance encounter, it feels like a mission. There is no grand plan or lingering plot threads. Instead, Vann delivers a tight script that has an enjoyable conflict resolved by the end of the issue. Not only this, but there’s ample opportunity for great character moments. Hrolf gets to be the awkward yet tough leader, spouting one-liners like “MY MEAT IS DELICIOUS. BUT YOU’LL NOT TASTE IT, BEAST.” and inspiring morale in his followers. Mhord gets to be the drunken yet wise old man of the group, and Sigrid gets to slip around and be the unsung hero, firing well-placed arrows and acting like a general badass.

What’s fun about this and the backup story is how they use the villains to explore more of the characters’ potential. We get to see more of the defected alien Frodi act in the main story, spouting alien language yet expressing himself through his actions and reactions with other characters. His place in the Laxdale clan feels cemented as he fights alongside them with the same passion as Hrolf or Sigurd, and ultimately re-engineers his weapon to defeat Zurok, the antagonistic villain. On that note, Zurok himself isn’t simply a force of nature: Vann adds a little sympathy to his character that hits close to home for many, telling that he was beaten and left for dead by a Viking clan, stoking his want for revenge. The backup story sheds more light on Sigurd’s character, also in the face of adversity. We see her use her deadly smarts and senses to trick the ‘imp’ that has robbed her, showing her as a capable individual character who’s fierce in the face of an unknown entity. Vann handles his cast well across these stories, making me hope to one day come back for another visit to the “Spider King” universe.

Series co-creator Simone D’Armini returns here for an adventure that feels like Jack Kirby filtered through a smoother, modern and more anime-esque sheen. What you’ll notice from the first page is that D’Armini can handle a big cast in small spaces very easily. Perspective is handled well to achieve this, with the opening scene having the Laxdale clan marching across a snowy atmosphere, all differently sized and all situated at different distances, yet still looking naturally placed. What’s even more impressive is that the action scenes, in which most of the characters still appear, are executed with a feeling of beautiful chaos. Everywhere you look in a scene, there’s a sense of kinetic, unbridled motion. Whenever an animal possessed by Zurok appears, we have Hrolf lurching and thrusting his great otherworldly blade forward, or the pack horse writhing in despair, or both of those events mixed with a pack of Zurok-possessed crows swarming between them in a flowing sea of action. D’Armini handles characters and real estate for them on the page superbly.

The backup story is drawn by Daniel Irizarri of “Cloudia and Rex” fame, who gives the story a charming, intimate style that still feels at home in D’Armini’s weird fantasy universe. A lot of the environment in “The Errand” is huge, snowy pine trees, yet Irizarri frames them in a way that they feel intimate, yet their height makes them isolating at the same time. Irizarri’s action and character work aren’t as fluid and sweeping as D’Armini’s, yet there’s a sense of deliberation and purpose to each panel in the action scenes. When the alien robot shows up to fight Sigurd, there’s a sharp sense of movement panel to panel, as Sigurd turns quickly to pelt a rock at the robot, before jumping straight into the air and being thrust away by the robot in the next two panels. There’s a real sense of immediacy and sharp changes, yet it works well with the urgent sense of pacing in the fight. Irizarri feels a lot sharper and more choreographed than D’Armini, and the style change makes for a solid backup story.

Colors are done by Adrian Bloch, who gives the issue the series vibrant, candy-colored futurism. From the start, we get a slow build from the more realistic, yet still nicely saturated blues of the cold European landscape. As soon as Zurok enters the scene, acting as the catalyst for change that he seems to be, we get more colors introduced into the palette. Bloch adds nice peach-tinted reds for flames and beaming neon blues that highlight Zurok’s possession within creatures. Things become more fun and chaotic as the battles continue, with the vibrant blue and reds blending into hazy magentas, culminating at a point where Zurok appears possessing a Viking skeleton in a splash-page gesture. It’s a great build-up and payoff, and shows some super fun coloring work.

“The Spider King: Frostbite” is a great return for the series that makes me desperate for more of these one-off style stories. Vann delivers a great closed story with fantastic character moments and villains. D’Armini and Irizarri bring great, fluid action to the table, but with enough contrast and difference in their styles that they both feel unique. This is a one-shot done right.

Final Score 9.0 – “The Spider King: Frostbite” is a great trip back into Vann and D’Armini’s original series.