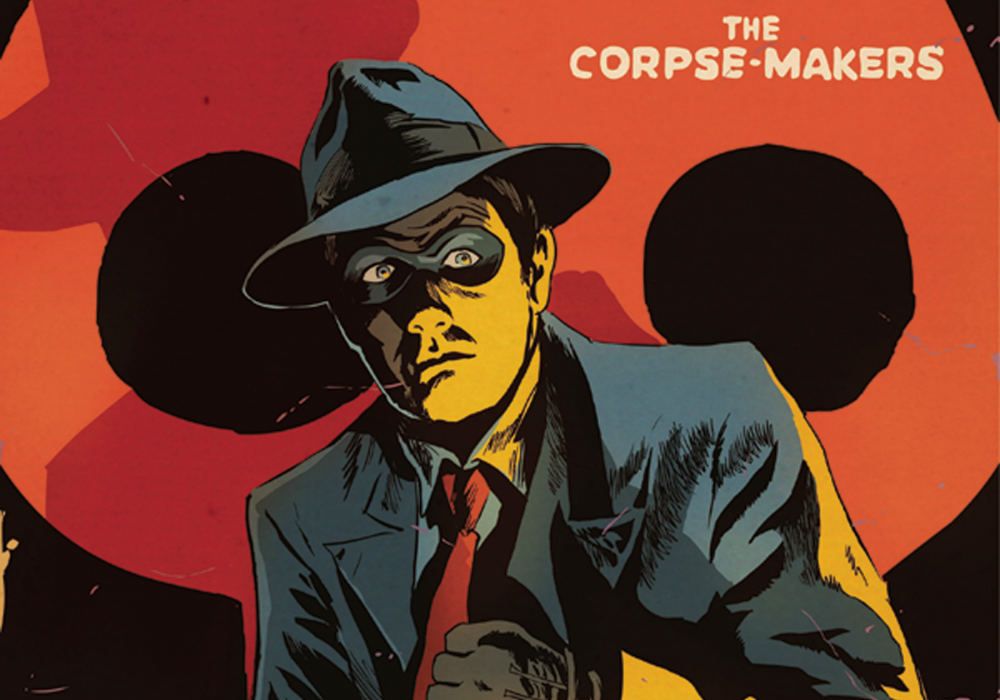 Francesco Francavilla’s first image of Denny Colt shows him sitting alone in a graveyard; rain pours off the brim of his fedora and runs down the length of his fingers in streams. There’s a solemnity, awash purple and blue, as hand-drawn letters provide a dedication to Will Eisner and Darwyn Cooke. But the page doubles as an overture – with Francavilla setting his table thematically, through tone, color palette, deluge, and shadow. It’s a melancholic introduction to what’s sure to be a moody turn on this pulp icon.

Written and illustrated by Francesco Francavilla

A series of unexpected disappearances and deaths hit Central City. Initially these cases seem purely unrelated: no apparent connection between the victims makes it easy for the police to just file them as runaways or natural deaths. But when someone close to Ebony White disappears, The Spirit is on the case! From the mind of writer/artist & Eisner winner Francesco Francavilla, comes a thrilling tale of The Spirit that promises to tingle your spines.

“The Spirit: The Corpse Makers” #1 is rich with Francavilla’s atmospheric coloring. Shadows are a deep onyx, while heavy torrents of rain bathe dark lit alleyways, side streets and abandoned lots in indigo hues and midnight blue. When police sirens wail at the scene of a homeless man’s death, every figure is half- brushed with red. The color work alone gives the impression that the cherries atop those cop cars are spinning. It’s impressive stuff.

What really shines here are the small details that deliver a dose of hyper-reality to the cliched, pulp setup of a dark-and-stormy night. But in a noirish story like this, that weather forecast is basically a prerequisite, so Francavilla dives into the convention. He doesn’t just stop at staccato lines to show rain falling. Characters are pelted so hard that a misty haze rises from the impact upon their shoulders. Wet asphalt shimmers in waves as headlights and streetlights reflect off the road. Puddles splash underfoot. Water drips off fedoras and pools in swirls on every windshield of every car.

Like in any great Spirit story, Denny Colt is almost tangential to plot. He’s at the crime scene just long enough for Commissioner Dolan to tell him the death was natural causes and there’s no case to solve. We can safely assume that’s not true, but it swiftly moves Colt along to a second, slightly longer, conversation with his driver, Ebony White (“My cousin Vince is in town – I haven’t seen him in a few years”… “Cousin?! I didn’t know you had a cousin”… “Everyone has a cousin boss.”). In these early scenes, Francavilla very quickly establishes two key relationships, introduces two separate narratives, and keeps The Spirit at the fringes of both. It’s incredibly economic storytelling. And when the storylines finally intersect, the Spirit is still on the sidelines, watching the TV news, eating Chinese takeout, and commenting on the rain.

See, The Spirit isn’t a figure of great complexity or sweeping character development. Who he is – and what Francavilla seems to understand – is something far more spectral. He doesn’t drive the story; he’s ethereal, floating from one case to another, blowing open the doors that need to be opened, before exacting vengeance only when vengeance is required.

And that’s where the melancholy comes back. During a near-squall – because everything seems sadder in the rain – we see a man, civil enough with Dolan, but only really there to work a case. He’s genuinely shocked that Ebony has any relations other than himself. Francavilla characterizes him every bit as alone as that solemn image in the prelude, even when he’s sitting in the backseat of another man’s car.

But that mood isn’t all that’s on offer. There’s pulpy shenanigans and mystery afoot. A morgue attendant sells the corpse to a pair of hooded figures driving a hearse; Vince is coerced into working one last score. Francavilla bounces between the two threads in a deceptively simple transition, jumping from Vince in one car to the figures in the hearse as the two vehicles pass by each other on an empty street. Sure, there’s an element of convenience that they both just happen to be on the same road. But it makes for some clear, efficient storytelling.

I can’t finish without heaping praise on the lettering. Dialogue appears as a ramshackle lilt that’s the perfect aesthetic for these pulpy denizens. And Dolan’s narration at the crime scene being a rigid typeface on scraps torn from a policeman’s ledger is a beautiful touch. But what really sing are the hand drawn sound effects, each one given clear direction and perfectly aligned with whatever’s making the noise.

Along with variations in size, shape, and elongation of the sound, Francavilla gives them such a strong sense of motion you’ll almost catch you neck moving to catch up with your eyes as they sweep through the action. Late in the issue, a car chase splashes over two pages. It’s vintage Francavilla – maybe even setting a new bar – complete with his arcing panel layouts. It’s a thrilling synergy of sound and movement. Engines roar, sirens blare, gunshots burst; all while the vehicles churn blacktop, growing to immense proportions as they propel across the page. Francavilla stuffs five or six beats of a complete car chase into that one image.

The Spirit exists in a time period that seems equal parts quaint and antiquated, so it’s interesting to see Francavilla sow some seeds of more topical relevance. Denny’s glimpse of the news broadcast hints at energy crises, entrepreneurs battling government restriction, and environmentalists pleading for restraint. I can’t wait to see how these heavier threads tie in to the pulpish intrigue and pensive atmosphere.

Final Verdict: 8.0 – Fantastic art, and a story that follows some typical beats. But knowing all the steps doesn’t make the dance any less fun.