“The Stone Heart,” the second part of Faith Erin Hicks’s Nameless City trilogy from First Second, is a masterful work. I’ve been in anticipation for this book for a year now and it did not disappoint. 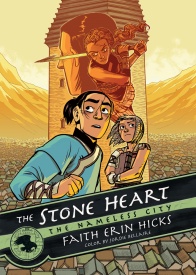 Kaidu and Rat have only just recovered from the assassination attempt on the General of All Blades when more chaos breaks loose in the Nameless City: deep conflicts within the Dao nation are making it impossible to find a political solution for the disputed territory of the City itself.

To complicate things further, Kaidu is fairly certain he’s stumbled on a formula for the lost weapon of the mysterious founders of the City… But sharing it with the Dao military would be a complete betrayal of his friendship with Rat. Can Kai find the right solution before the Dao find themselves at war?

“The Nameless City” was among my favorite books for 2016, so much so that “The Stone Heart” was my single most anticipated book for 2017. Faith Erin Hicks is one of those creators whose work I always enjoy, and “The Nameless City” was Hicks at her very best. However, that honor now falls to “The Stone Heart.” This book is an incredible work that builds on its predecessor and exceeds it.

If you haven’t read the book yet, I recommend returning to “The Nameless City” first and giving it a reread. The way Hicks tells this story, she puts a lot of weight in the way characters look or don’t look at each other, and the context of each meaningful glance is much more powerful if the various plot threads of “The Nameless City” are still fresh in the reader’s mind.

I’ve seen this book compared to Avatar: The Last Airbender a few times, a similarity the marketing team behind the books is clearly aware of since the first volume bears a quote from Brian Konietzko, co-creator of Avatar and The Legend of Korra, on its cover. It’s easy to find similarities since both are fantasy worlds drawn from Asian cultures, but I find those similarities to be largely superficial. The far more interesting similarity is the way these stories find unexpected complexity in children’s stories, especially in their villains and heroes and the blurry line between.

“The Nameless City” was really good at hinting at the trilogy’s story without overwhelming the story of the individual volume. Hicks could say all she needed with just a scowl on Rat’s scarred face. But these elements weren’t just set dressing. One of the big joys of “The Stone Heart” is the way these details emerge from the periphery of “The Nameless City” and step to the foreground in “The Stone Heart.”

“The Stone Heart” wouldn’t be what it is without “The Nameless City.” While the original story largely stood alone, the sequel is clearly a middle act. In many ways, the quality of “The Stone Heart” speaks to the strength of its foundation, so if you haven’t read the original book, you are going to miss things and your experience will be weaker for it.

Trust me, reading these books back to back is an awesome experience.

Jordie Bellaire returns as the colorist, and the added complexity of the plot is reflected in her work. This story has more flashbacks, more varied points of view, and Bellaire’s work separates these sequences so elegantly. They’re clearly distinct and yet they flow into each other seamlessly. The flashbacks especially take on an almost monochromatic approach, underscoring a specific emotion associated with memory. Hicks is a storyteller that loves the visual aspect of comics storytelling and in Bellaire she’s found a perfect partner.

There’s a sequence in the book with virtually no dialogue where the characters simply travel and look at things. Throughout, Bellaire bleeds reddish-orange into the sequence, giving it a subtle, yet unmistakable note of growing danger.

“The Stone Heart” is not all doom and gloom though. Hicks is knows how to infuse humor, particularly character-based humor, throughout the book without undermining the larger story. In fact, she often uses it as set-up for pay-offs later, and to strengthen character relationships without talking about the plot directly.

There’s a sequence early in “The Stone Heart” in which Rat introduces Kai to her friends, and the relationships between the characters become a kind of microcosm for the relationships between the residents of the city at large. Plus, the sequence was held together by some elegant visuals as Kai plays a song on a Ruan. He’s a little rusty at first, and the notes are jagged and broken, but gradually they take shape and swirl in long lines around the characters, leading the reader’s eye throughout. The music goes from an intrusion on the image to the backbone of it.

This is the sort of idea that I think would find itself cut from other comics to give space for more plot-heavy sequences, but Hicks clearly values the tone of her work, so not only did she keep the scene, but she gave it the space it needed to come to life. Plus it was a nice visual to underscore some of the larger themes of the series, especially the dual nature of things; the music is beautiful and yet it’s a song about a battle. Exploring this sort of subject matter in this way ensures the reader feels these themes on an emotional level, which is vital in a story where emotions can often prevent a character from seeing things objectively.

“The Stone Heart” is a much more introspective book than “The Nameless City.” One of its greatest strengths is the way it takes ideas introduced in the original book and then deconstructs them and even breaks them, yet remains tonally consistent. There’s nothing wasted in its pages. I particularly love the way Hicks and Bellaire use environments to express a character’s inner life. Rat’s room in the Stone Heart has plaster falling away from the walls to reveal bare brickwork, but there are also drawings of trees on the walls. Meanwhile Kai’s room is large and clean and empty, devoid of his character, each panel emphasizing the imposing nature of his environment. He doesn’t fit there and only comes to life when he’s in the palace’s library.

“The Stone Heart” isn’t without its shortcomings though. There were moments of convenience in the plot. A particular moment late in the book felt like events played out the way they did for the sake of simplicity and to keep things moving. It reminded me a little of John McClane’s clairvoyant ability to know Bill Clay was actually Hans Gruber. However, just like in Die Hard, it’s a small sin at best and an easy one to forgive. I was too swept up in the story by that point.

This book hit me harder than “The Nameless City.” I find myself utterly captivated by the world and characters Hicks has created. This truly is her finest work, and I fully expect to be saying the same thing when the final part, “The Divided Earth,” comes out next year.

Final verdict: 9. “The Stone Heart” is a sequel that upstages its predecessor—a truly rewarding reading experience, one I’m already eager to indulge in again.