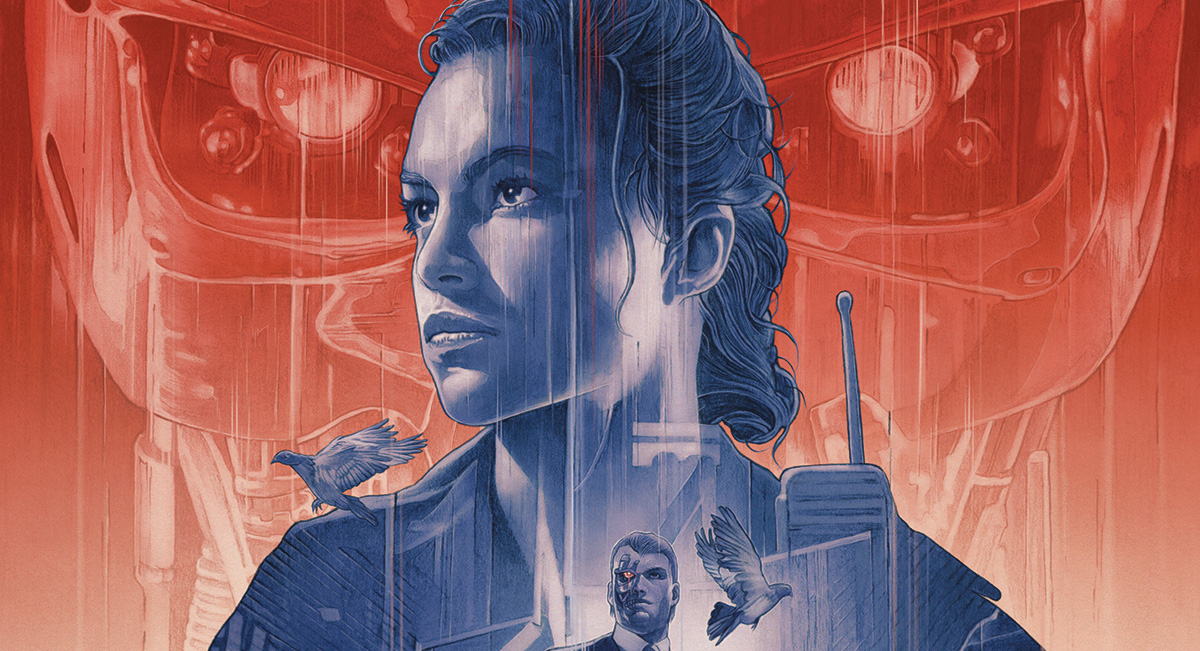 Few film franchises have had the amount of reboots and timeline changes that The Terminator series has. There are five films (with a sixth on the way), a short-lived TV series, The Sarah Connor Chronicles, and a slew of comics that all use time travel to change and erase what has come before. With the new film looking to again reboot the series while erasing everything set after Terminator 2: Judgement Day, Dark Horse Comics has a new mini-series that is set during the original film to add more to what, will now be, the official canon. 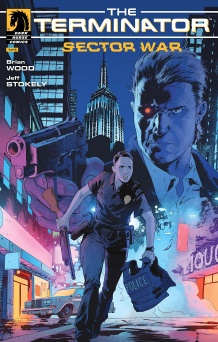 In 1984 there is a Terminator in Los Angeles hunting Sarah Connor, mother of the future human resistance leader John Connor. At the same time in New York, another Terminator arrives to kill NYPD officer Lucy Castro, stationed in one of the most crime-ridden sections of the Bronx. Why is this rookie cop a target of Skynet and will this other T-800 be successful in its hunt?

The Terminator comic books have had about the same poor track record as the film series with seemingly endless changes and little regard for quality. Jumping from publisher to publisher; most stories are simple future-war stories, non-canon sequels to the first two films or mediocre crossover events with characters from other film franchises and comic publishers that end up being little more than mass-produced fan fiction. Few to none have had the tone or the heart of the James Cameron films and rarely have any been praised as great additions to the franchise. “Sector War” might be the first “Terminator” comic to figure out the formula.

Brian Wood (“The Massive,” “Star Wars”) is a master at writing comic book spin-offs of beloved sci-fi/action movies. He is able to connect with a franchise the way most everyday fans do while spinning a new story. Even with minimal dialogue Wood has a way of creating something new while staying faithful to the property and reminding you why you fell in the love with in in the first place. This first issue of the four-part miniseries seems to be setting up another great comic for a franchise that needs a hit.

The story so far is a mirror to the one told in the first film and while it loses some points for being a little less than original, the quality of action and dialogue in keeping with the traditional Terminator tone keeps this issue well above water. It is incredibly satisfying to see a female character that can take care of herself right from the start and is not immediately in need of a protector. As much as I love Sarah Connor’s arc of changing from young, feeble diner waitress to ultimate bad-ass, it is greatly appreciated that we are not getting a beat for beat re-hash here. While similar, it still feels like a fresh chapter. Another interesting change is the T-800’s personality. It comes off as a bit more human than Arnold’s portrayal prior to the second film. It has human-like reactions and its dialogue has more levels to it.

You are not alone if you get a headache just thinking about the Terminator timeline and it is clear that Wood and co. are trying to keep things simple in these times of canonical upheaval. This is the smart thing to do in this case. Keep things simple, fresh and take it all back to the beginning – especially when time travel is involved. Plenty of nods to the original film and great little details setting up these new characters lives and personalities make for a solid read. The filthy New York of the past, big guns and bigger adversaries feels right at home in this 80s set series. This premiere issue does a good job of prepping fans for what will hopefully be one of the better “Terminator” comics out there.

Jeff Stokely’s (“DMC,” “Gotham Academy”) art is highly detailed and captures the dingy, drug and trash-laden New York of the 80s. It is fairly reminiscent of a lot of the dark sci-fi comics out there and while the work is quite good, it is not going to stand out with readers who delve into the genre regularly. The attention to settings outweighs that of the character designs in certain cases. The quality of the two main characters was prioritized over any side or background character. While this doesn’t seem like a big deal, it does lead to some quality inconsistencies throughout the issue. Unfortunately even characters we are following for a few pages do not look as good as Lucy or the T-800. Triona Farrell’s (“Runaways,” “Star Trek”) colors do add a lot to the pages and are unquestionably one of the best things about the book. Bright colors pop against shadows keeping the 80s vibe comfortably married to the darkness of The Terminator. Even with a few missteps, the artwork does a good job, but with some years separating us from the last comic, it would have been great to seeing art that set it far and away from what’s been done with most other film spin-offs.

“Sector War” #1 is a well-done and intriguing start to this new mini-series. This is sure to make fans happy. The action starts immediately and never lets up. Wood knows how to breathe new life into beloved franchises. Even with a similar plot and direct callbacks, the new book stands on its own and we should all look forward to the coming issues.

Final Verdict: 7.5 – A great horror/sci-fi tale mixed with the hard-nosed action that has been sorely missing from this property.