Welcome to the world of “The Tomorrows.” 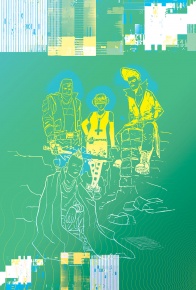 Written by Curt Pires
Illustrated by Jason Copland
Who owns your future?
They told you the counterculture was dead. They were wrong. Welcome to the new reality.
A bold new speculative-fiction comic from the mind of writer Curt Pires, with each issue illustrated by a different brilliant artist!
The future: Art is illegal. Everything everyone ever posted online has been weaponized against them. The reign of the Corporation is quickly becoming as absolute as it is brutal—unless the Tomorrows can stop it.

Reading “The Tomorrows” #1 feels like jumping in mid-way to a story already in full swing. That’s the only way I can describe the feeling of this issue. The way this world and story is constructed, it feels like showing up to a movie that’s already in its second act. This isn’t a complaint, by the way, this is how the story is meant to be read. The world that writer Curt Pires has created with artist Jason Copland feels so lived in that characters appear fully formed with past relationships and grudges with one another. Because of this, this first issue spends very little time in the way of introductions and instead is an action-packed ride the likes of which any other series would take years to reach.

Our introduction to the world of “The Tomorrows” is sudden and impactful as they, very literally, kick down the door, grab us by the arm and take off running and the issue doesn’t let up from that point on until it ends. This is an issue where Pires and Copland are able to introduce all of the main players in the story and establish their connections to each other and the world around them all while keeping a breakneck pace and filling the issue with action. This is quite the feat and it’s largely achieved by gutting any kind of filler.

Every panel of this issue reveals something new about the story, be it about the world or the characters, and that allows the story to go to places that usually don’t show up until 5 or 10, maybe even 20, issues into the run. This includes a mid-issue swerve that creates a whole well of backstory to explore in later issues and a climactic confrontation with the series villain that reads like these people have faced off against one another for years.

From a writing standpoint, this issue is fascinating. It feels like an issue that shouldn’t work. It has the burden of introducing us to Zoey, our viewpoint in this world, and showing how she gets wrapped up in The Tomorrows. Then it goes on to introduce The Tomorrows themselves and their mission and who they fight again. Now, most writers would likely structure this issue around those story beats and call it a day and that would make for a solid issue. But Curt Pires isn’t most writers. Instead, Pires blows through all that before the issue is even halfway done and has the meat of the issue revolve around a meeting between The Tomorrows and the man they are fighting against.

This feeling of having fallen into the middle of a story that seems to have been playing out for a while before we even showed up really puts into Zoey’s shows and brings a lot of depth to the world of “The Tomorrows”. It allows us to be introduced to each member of the group and get a read on their personality without the pace of the issue slowing to a halt to do so. No one feels the need to stop and explain why the group exists or how it came about. Instead, the focus is on keeping the pace moving forward until going out with a bang and creating one of the best hooks for a second issue I’ve seen in a long time.

As impressive as the writing is in this issue, the artwork by Jason Copland is just as impressive. Copland creates a dark vision of the future here that feels cramped by buildings and crowded by people. While we don’t see a lot of the city itself very much in this issue, we get a glimpse of the larger world here and there between focusing on the back alleys and underground bases that are The Tomorrows’ forte.

Copland’s style perfectly fits the book and makes an excellent first impression as the sketchy lines bring a gritty, grounded sense to this otherwise very sci-fi future. This grounded style is offset by the colour palette used by Adam Metcalfe, who uses a lot of vibrant and neon soaked colours; largely blues and greens with pinks and a little bit of purple used as an offset. This vibrancy to the colours contrasts with the rather dark nature of the art and even the writing at times to create a very pulp-y style.

In this issue, Jason Copland’s storytelling is immaculate. His sense of pacing really lends to how quick this issue feels. Copland largely employs very conventional panels in this issue, keeping them blocky and rigid, but offsets this by having quite a few panels per page that allow him to convey a lot of story in one page. This helps both the action scenes – like the opening as Copland is able to slow down the way the fight is laid out by having it encompass nine panels on one page – and the dialogue scenes as it gives each page a lot of real estate to work with.

This issue is a fun and exciting first issue that manages to both feel fresh and new as we’re introduced to these characters for the first time, but lived-in at the same time as we see conflicts that have clearly burned for a while in-universe come to a head. Curt Pires and Jason Copland have created a first issue that ably combines excellent action with an engaging story that keeps you hooked and wanting more. While Copland won’t be returning to “The Tomorrows” for the time being, as each issue will be illustrated by a different artist, he was a fantastic choice to kick off this first issue.

Final Verdict: 8.8 – Welcome to the new reality. It belongs to “The Tomorrows”.