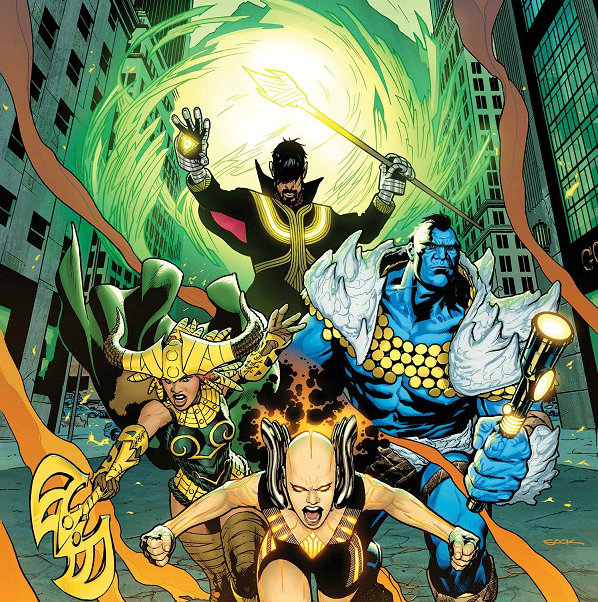 “The Unexpected” #1, the last new series launching under the ‘New Age of Heroes’ banner by DC introduces new characters, settings and concepts, some of them based on the constructs first introduced during the ‘Metal’ event. However, as much as the creative team bursts with energy and new ideas, they also stumble in terms of structure and a clear sense of what this new series is about. 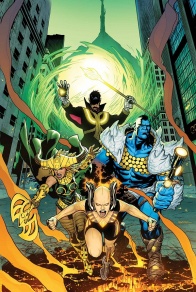 In the aftermath of DARK NIGHTS: METAL, the DC Universe has been forever changed as new heroes are called out of the shadows. Amid this all is Janet Fals…Firebrand! Once a paramedic dedicated to saving lives, she must now start a fight once every 24 hours to feed the Conflict Engine that’s replaced her heart. But Janet’s heart isn’t just a curse-it’s a beacon, drawing out both the mysterious Neon the Unknown and the seductive, malevolent Bad Samaritan. One of them wants to cut out her heart, the other wants to save it-but neither of them knows the true danger hidden within that will kick off a superhero manhunt ranging from Thanagar to the deepest heart of the Dark Multiverse!

Right off the gate, “The Unexpected” #1 introduces its lead character in the shape of a new Firebrand, a former paramedic deeply affected by the invasion on Gotham city as shown during ‘Metal.’ One might assume that she earned her powers and abilities from the energies that erupted from that crisis, but that is not quite the case. In a decision that seems to be pervasive for the issue as a whole, her origin is far more convoluted than that, in what seems almost like a conscious decision by writer Steve Orlando and the creative team to be complex for complexity’s sake.

Before dwelling too much on the script and plot, one must recognize that the talent and quality of both pencilers – Ryan Sook and Cary Nord – is excellent. The visual sense of discovery on these pages is certainly a positive aspect of the book. As readers start to get familiar with Firebrand, Neon, Bad Samaritan and a number of new characters, they will be treated to some truly unique and inventive design choices, both in what seems to be the more mundane, as well as the obviously supernatural and super-powered. Power signatures, clothing, facial traits… it all feels new and connected at the same time.

Panel design, especially on the second half of the book, also shows some interesting choices that add to the sense of movement of the issue as a whole. Note how some characters extrapolate their movement to beyond the panel borders, how artists use narrower panels, followed by wider shots, to dictate the rhythm of the story. It all adds to the frenetic pacing of this issue which was obviously one primary objective of the script itself.

Nonetheless, the art is not without its flaws, especially on the account of having two artists in one single issue – and a debut issue at that. While Sook and Nord do their best to respect the design choices and ensure some consistency across this issue, they are not always successful, especially around character expressions. There are moments, even around the lead Firebrand, that the turn of a page presents readers with a very distinct look and feel. This multiplicity of artists has been a constant thorn in the ‘New Age of Heroes’ line, but when it is observed on a debut issue like this the effect seems more jarring.

Unto Orlando’s decisions around the story. This is a very unapologetic and unforgiving issue in terms of taking readers by the hand and explaining everything that is going on – and that is not a bad thing on its own. On other situations and stories – even the recently wrapped ‘Metal’ event – this sense on unknowing and discovery plays to the story’s advantage. The problem here is that there is little to anchor the new elements, so readers can feel completely lost in the narrative. With new characters with convoluted pasts, situations that are tied to multiple past events, and with the few existing characters leaning surely into the more obscure side of the DC’s library, the book ceases to be unexpected to become simply unclear.

Not all is lost, though: the dialogue between Firebrand, the group led by Neon and main villain (at least on this outing) Bad Samaritan is very strong. Orlando has always shown the ability to translate personalities into believable exchanges, and that is the case here. One can easily understand the behaviors multiple characters are presenting – despite a lack of comprehension on the why’s – simply by reading some exchanges.

Final Verdict : 6.5 – It is somewhat frustrating that “The Unexpected” #1 fails in telling a compelling story on this issue. While it is abundantly clear that there was a lot of world building, design and creative discussions to make this issue happen, it is also clear that the creative team bit more than they could possible chew in these twenty pages.