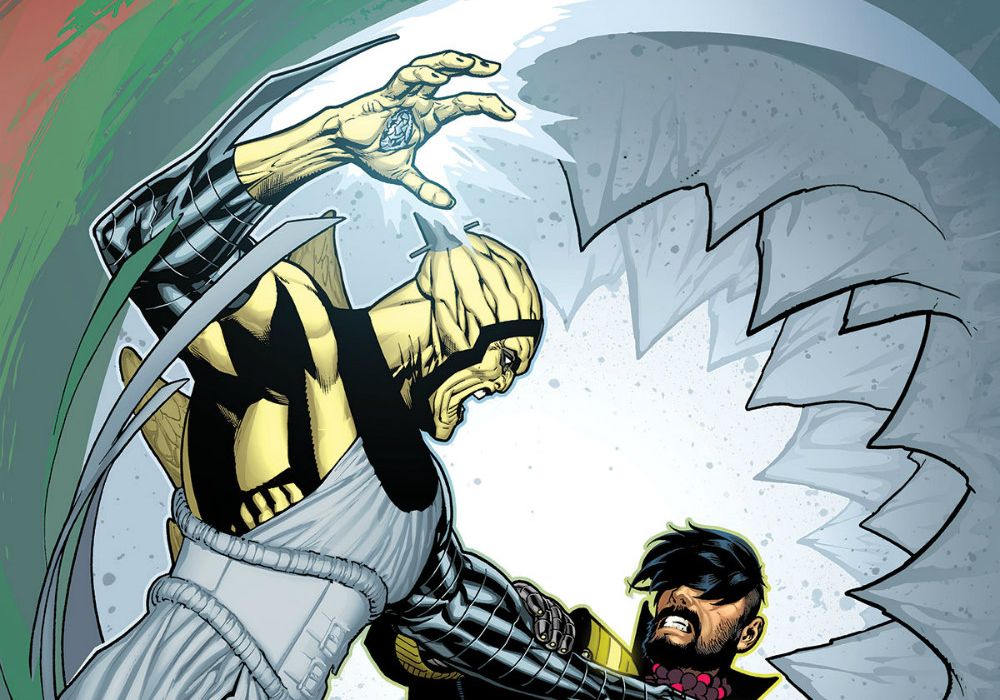 “The Unexpected”, Steve Orlando’s team book that serves as a love letter to the glory days of mid-2000’s DC while balancing new and interesting heroes and content continues to churn new story material with issue #3. With Cary Nord now taking over from Ryan Sook since the last issue, this book has proved to be one of the most innovative and, funnily enough, unpredictable of the New Age Of Heroes line. Can it hold it’s position with this installment? 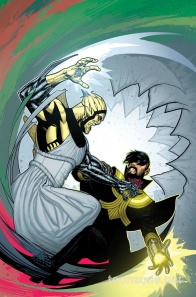 Thanagarian demon Onimar Synn stands prepared to wipe out everyone on Earth to get his claws on the vibroactive Nth metal accidentally created by Neon the Unknown and the Unexpected. Is this new version of Nth metal the most powerful weapon in the galaxy? Or is it the fuel to bring about a new evolution and propel mankind into the future? Plus, get ready for a showdown of Jurassic proportions, as Synn locks horns with a rampaging Brontadon in Monster Valley!

Throughout Orlando’s DC work, it’s clear to see how much fun he has here, reveling in the forgotten lore of this universe. “The Unexpected” is no exception and this issue broadly shows how much he tries to build up a world that feels ancient and rich. From using Blackhawk Island as a base of operations of sorts for Neon and Firebrand to bringing back an old Geoff Johns-created Hawkman villain with supreme pomp and circumstance, it’s clear that this comic more than anything celebrates the old and forgotten and the new and innovative of the DCU all at once. What’s even more of an accomplishment is that this isn’t impenetrable for older readers. Orlando’s original characters Neon and Firebrand work well as POV characters for the reader in this issue, as they come across these ancient phenomena, reacting to them with the same shock and awe as we readers might. The fact that some of these settings and characters are from older DC deep-cuts I find elevates the book even more. I didn’t realize Onimar Synn wasn’t a new character until I searched his name, which has prompted me to go back and look over his older appearances.

The most interesting part of this book, however, is the development of the characters Neon and Firebrand, and the tension between them as the hosts of the Fires of Creation and Destruction. Orlando builds a lot on this relationship in this issue, having the two Fires act as aggressors between them. We see Neon in his mourning of Ascendant suddenly snap at Firebrand, who promptly fires back proclaiming her innocence before attempting to goad Neon into a fight. It’s a good way at establishing a connection, despite being a negative one, between characters who barely know each other. It also sets a tone of unease between them for the rest of the issue, as they work together peacefully but talking with caution, trying not to set the other person off. We also start to see Neon less as a messianic leader figure but as a human just as flawed as Firebrand. As he mourns and reflects on all his losses, we start to see the cracks in his psyche, as someone with a touch of ego. Even though the moment that he calls out Firebrand for the loss of his teammates is seemingly the work of the Fires, it feels like a very revealing moment for the true nature of this totemic characters.

Cary Nord has proven to be quite the fantastic fit for this series, carrying on with Sook’s incredible character designs and aesthetic art style. He takes a less-is-more approach to scenery and general composition in this issue, focusing more on creating dynamic character moments after table-setting an environment for a set scene. Blackhawk Island at the start is probably the busiest section of this issue, showing the erupting mountain in the background before moving to an indoor facility filled with robots and other crazy contraptions. We also get a flashback in the mid-point of this scene, showing the origin of Ascendant and the Orcks. Nord uses dynamic camera angling, like an ant’s eye view to show the regality of the Orck floating city, and close-ups to show how handy the race was at handling and creating tech. But later, in the Onimar Synn confrontation, Nord forgoes a lot of background work in favor of atmosphere and action. The scene showing Synn staring down Neon and Firebrand looks particularly elegant. There are only a few panels in the upper right corner before devoting most of the page to Synn’s huge stature against a smoky and sinister grey background. Following this, we get some great action when Firebrand launches herself at Synn. Again, the background is sacrificed in this section, and it does affect how interesting the scene looks at times. However, Nord’s paneling and use of characters popping from panel borders create a great, break-neck pace effect, making the action all-encompassing and interesting enough to make up for static backgrounds.

Inking is handled here by Mark Farmer and Scott Hanna, and give Nord’s pencils a distinctive feel especially from von Grawbadger’s inks on the last issue. The most interesting thing to me here was how much Hanna and Farmer’s inks accentuate the Mignola-esque shading and aesthetic of Nord’s art. Shadow lines are much sharper and simplistic, giving this book a classic-looking feel and more stylistic energy that suits Orlando’s script. One particular panel that this struck me the most was in the Onimar Synn confrontation. The fourth page of the scene, we see a half-page vertical panel depicting Synn’s face. The shading is so angular and thick, it gives Synn a powerful, sinister tone that impacts the rest of the scene and how we perceive and judge the villain. I do feel like Farmer and Hanna forego the backgrounds even more than Nord does, however. When we first encounter Ascendant’s bunker, or “Alien Bomb Shelter” as Firebrand describes it, I expect for the look of it to reflect this choice of words. We get a few interesting pipes and vents, but not enough detail is paid to the architecture in this scene to make it look appropriate.

Nord’s art often adapts well to a simpler, yet still painterly style of coloring and Jeremy Cox brings this aboard perfectly. Cox applies broad strokes of color right from the get-go, providing a clear blue sky backdrop for the scene to accentuate the interesting figures inhabiting the scene. Shading is cel-style but is softly applied, feeling natural and texturally similar to a flat watercolor brush shading. This works best when accentuating the valley aspect of Monster Valley, with the shading operating in a radial effect on the shape of the land. Cox work serves best here at establishing the tone in the Onimar Synn scenes, however. Every time the gigantic figure stands over the pair, Cox paints a soft, smokey smudge of greys, as if fog and mist are clouding his figure. It’s a great way to give his figure grandeur and mysticism, and Cox works well at creating this effect.

“The Unexpected” still manages to reign as the best of the New Age Of Heroes books with issue three. Orlando works great in developing a relationship between Neon and Firebrand, all the while bringing in new and old DC lore to make this book feel truly expansive. Nord provides some great camera and action work, with Farmer and Hanna giving his art a Mignola feel with thick, simplistic inks. It’s all topped off with soft, painterly colors by Cox, showing that along with everything else, this book remains to be consistently great in its creative synergy.