Stories from DC Comics across a divide of a decade collide in “The Unexpected” #6. 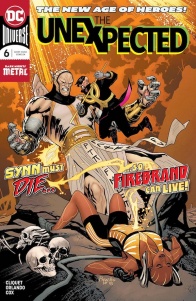 It’s a showdown at Castle Frankenstein with the souls of Berlin on the line as Hawkman, Neon and Firebrand battle Onimar Synn to possess the unstable Nth metal isotope. Plus, June Robbins’ secret rescue plan features the whirlwind reveal of a hero from DARK NIGHTS: METAL, not to mention the most important tombstone in the DC Multiverse! Prepare yourself for a shocking last-page reveal, which goes to a place not seen in the DCU in over a decade.

In an odd way, “The Unexpected” #6, despite being the sixth part in the ‘Call of the Unknown’ arc, is relatively accessible to newcomers, so long as they have an established knowledge of some elements of the DC Universe. Rather than delve too deeply into the elements that make “The Unexpected” unique on its own, Steve Orlando instead utilizes the existing elements of the general DC continuity. On the one hand, we have Onimar Synn’s animosity with Hawkman, and some elements of the DC Universe that have not been seen since Final Crisis back in 2008. On the other hand, we have the utilization of elements from other concurrent comics, such as the Tempus Fuginauts from “Sideways” merging in with elements that were abandoned or altogether destroyed since that time, bringing together elements of the past continuity with that of the present in a way that is part of the core of the years-long “DC Rebirth” line.

None of this is to say that Orlando does not give any focus on his established mythos for the eponymous Unexpected team members themselves. By focusing on the limitations of the protagonists’ powers, in particular what Neon the Unknown can or cannot alter with the Fires of Creation, Orlando is able to further develop readers’ understanding of what is possible for the remaining duo and their “fires.” Furthermore, by concentrating on what Neon cannot affect, Orlando is able to concentrate in on creative uses of the transformation powers, as well as ways to get around the power negating properties of Nth metal.

However, there is a bit of a pitfall both in concentrating so much on the action and in how Orlando deals with that emphasis. While such a focus is both appropriate for the story and necessary to continue and to an extent finish the arc, Orlando’s concentration on the fight inside and out of Onimar Synn leaves very little room for any rest, any points in which readers can have a quieter moment. The two very brief points in which this kind of thing happen are very quick, with one being the big revelation of the issue teased in the solicitation, and the other being a nigh inexplicable return of a villain from earlier issues. The former is excusable and perhaps appropriate, giving a brief calm before the storm, but the latter seemed to be injected into the story for the sake of having a quieter moment that also moves the story forward, any previous commentary on how this villain could return seemingly ignored outside of the basic “patron brought them back” idea. It’s not enough to break the issue, but the use of this kind of method to break up the possible over-emphasis on the fight wasn’t very well handled.

Fitting with the combat-heavy nature of “The Unexpected” #6, Ronan Cliquet utilizes a dynamic art style, with a heavy focus on perspective. Cliquet’s lines are thick, adding definition to the various actors in the fights, but thinner line work is shown through the exaggerated poses, especially when it comes to showing the ways in which shadows play across people’s faces in areas of very bright light. In those cases, Cliquet uses a simple crosshatch pattern, rather than doubling down on deeper, darker tones or a blurred shadow, a simple yet elegant way of showing an added perspective in the various shots.

The artwork on Firebrand is of particular notice. Owing to the fact that she is naught but a soul, and thus monochrome, all of the emphasis is on a grayscale, from lines to show where her Conflict Engine would normally be active, to other, thinner lines on her forehead that exaggerates where those lines would also connect to the Engine in her physical body. Bereft of color, Cliquet needs to make do with the enhanced definition of her form to showcase heightened emotional stress that comes with being nearly trapped forever as a soul. While Firebrand has always been a belligerent character by nature, hot blooded in all but the calmest of times, the emotional distress that Cliquet emphasizes with widened eyes and harsh, warped perspective shots deep in Onimar Synn’s body brings the emotional torque even higher.

Varied, bright colors have been a key part of “The Unexpected,” and Jeromy Cox does not disappoint. On the one hand, we have the dark, grey-and-navy color scheme inside of Onimar Synn, which enhances the feeling of being trapped in a metal cage, and helps add to the distinction from Neon’s bright gold and red ensemble, or Firebrand’s aforementioned grayscale look. The shards of red stone used for prisons of souls help to pepper the internal landscape with some added variety, but also add an ominous, foreboding mystique.

Splashes of red against golden Nth metal further enhance the brutality of the combat outside, with the bloody violence given a heavier concentration through the merger of raining blood with the red of many antagonistic souls and an apparent red sky above Castle Frankenstein.

While the story may not do very well on its own, art and colors help to elevate an at-times too conflict oriented script.

Final Verdict: 7.5– Despite some narrative problems on pacing, “The Unexpected” #6 continues the series’ interesting storytelling while allowing new readers in.