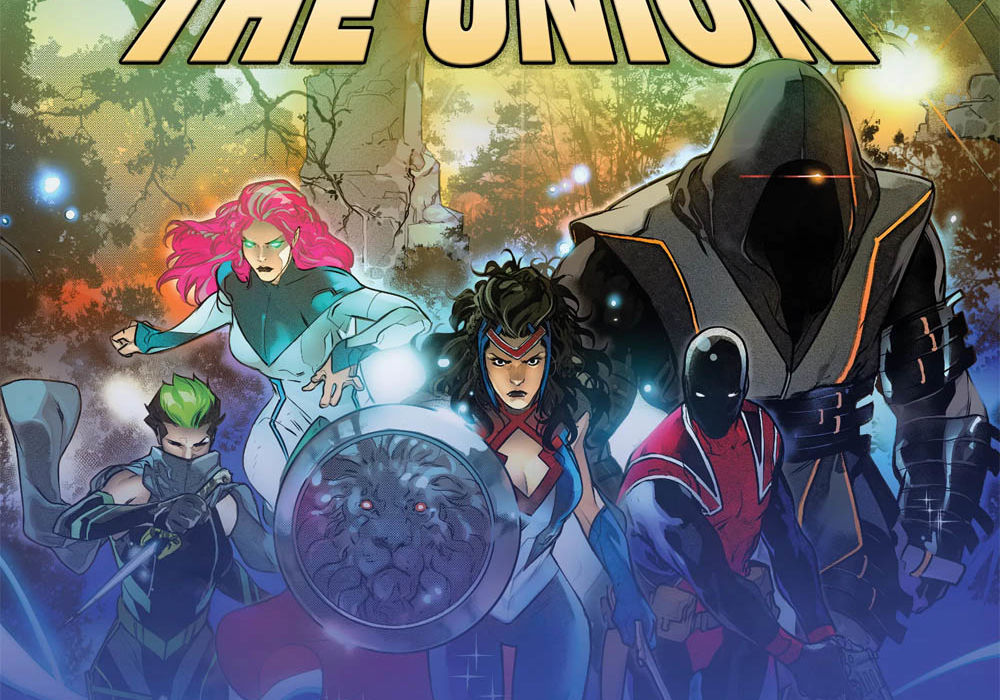 “The Union” #1 hits hard and fast, successfully pacing story with action and key character introductions. Like many comic arcs in the pandemic age, the circumstances in which “The Union” #1 have changed. When we first took note of “The Union” #1 back in February of this year, Marvel slated five issue comic #1 as a tie-in to the Empyre event. However, things changed, and now our team of intrepid British superheroes face off against Knull as part of the ongoing King in Black event. The battle lines have shifted, but the story remains the same: five British heroes, gathered from across the countries that form the Union, must act as a last line of defense against a voracious, malignant foe. Warning, some spoilers lie ahead! 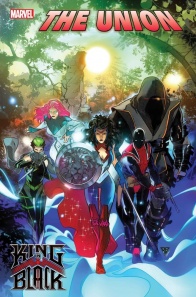 The grand unveiling of The Union! A team of super heroes gathered from all over the United Kingdom, featuring Union Jack, Snakes, Kelpie, Choir, and their fearless leader, Brittania! But when disaster strikes on their first public debut…the fledgling team is immediately pushed to their limits! Don’t miss out on an exciting new chapter of Marvel from legendary creators, Paul Grist (JUDGE DREDD) and Andrea Di Vito!

“The Union” #1 has to strike a delicate balance to succeed. For starters, holding nationalism and patriotism as the center of your superhero or superhero team comes with its pitfalls. While the history of comics is rife with patriotic himbos and paragons of national pride (hello, Captain America), the times have certainly changed. Rightfully so, we’re more critical, as an audience and an industry, of unhinged national pride and all that comes with it. So, what then for a group of superheroes hailing from one of the most prominent empires in history? Paul Grist gave us an answer in a recent interview, saying that the trick was to keep all of that stuff in the background — let the characters stand on their own, separate them from national tropes when necessary, and let them stand for unity, not division.

Overall, “The Union” #1 does a good job of achieving this goal. Much of this has to do with the plot of the first issue, the first half of which explains that this team isn’t so much an organic group of super friends, but something sponsored, and more corporate. We’re shown this most clearly in Steve Darwin, the tech CEO who’s funding the Britannia Project, the program that brought these five heroes together. Steve Darwin is media obsessed, brand centered, and willing to sacrifice ideals for clicks — the usual fare. While he doesn’t come off as particularly interesting yet, he serves as a good foil to the Britannia Project heroes, and helps set the stage.

And center stage, of course, are our heroes. Di Vito and Grist have done well in their characterization, giving each member of the team their own sleek, medieval yet modern look. Brittania herself rocks the ice blue lipstick like no other, and Union Jack, while pretty bare bones costume-wise, looks sleek. The Choir, Kelpie, and Snakes are all much more interesting. Especially Snakes, the executioner hooded, no small-talk looking hulk of a person. On top of that, we’ve only seen a fraction of their powers. In “The Union” #1, we see Kelpie (named after the eponymous water-horse-spirit of Scottish myth) do some ice bending and The Choir do some psychic subterfuge, but that’s about it so far — there’s still so much we don’t know.

All that potential energy is sure to pop next issue, because “The Union” #1 ends in just the right spot. We get the drama of Brittania herself succumbing to her stab wound from the Knull Dragon — which by the way, is beautifully drawn — with the anticipation of what comes next. Has Brittania really gone out in the first issue, or will she be resuscitated? Will this ragtag group of untested heroes pull off a win when surrounded on all sides? We’re excited to see how the story twists and turns in the coming issues, but if “The Union” #1 is any indicator, whatever happens will be thoughtful and heavy on the action.

In total, “The Union” #1 sets up a strong premise with intriguing, well visualized characters in a gorgeous setting. While it’s far too early to say whether or not this short series will be truly excellent or unparalleled — there’s nothing saying that it won’t be.

Final Verdict: 8.3. Well paced and promising action, “The Union” #1 offers a fresh cast of characters in a uniquely British palatte that still feels accessible to all.