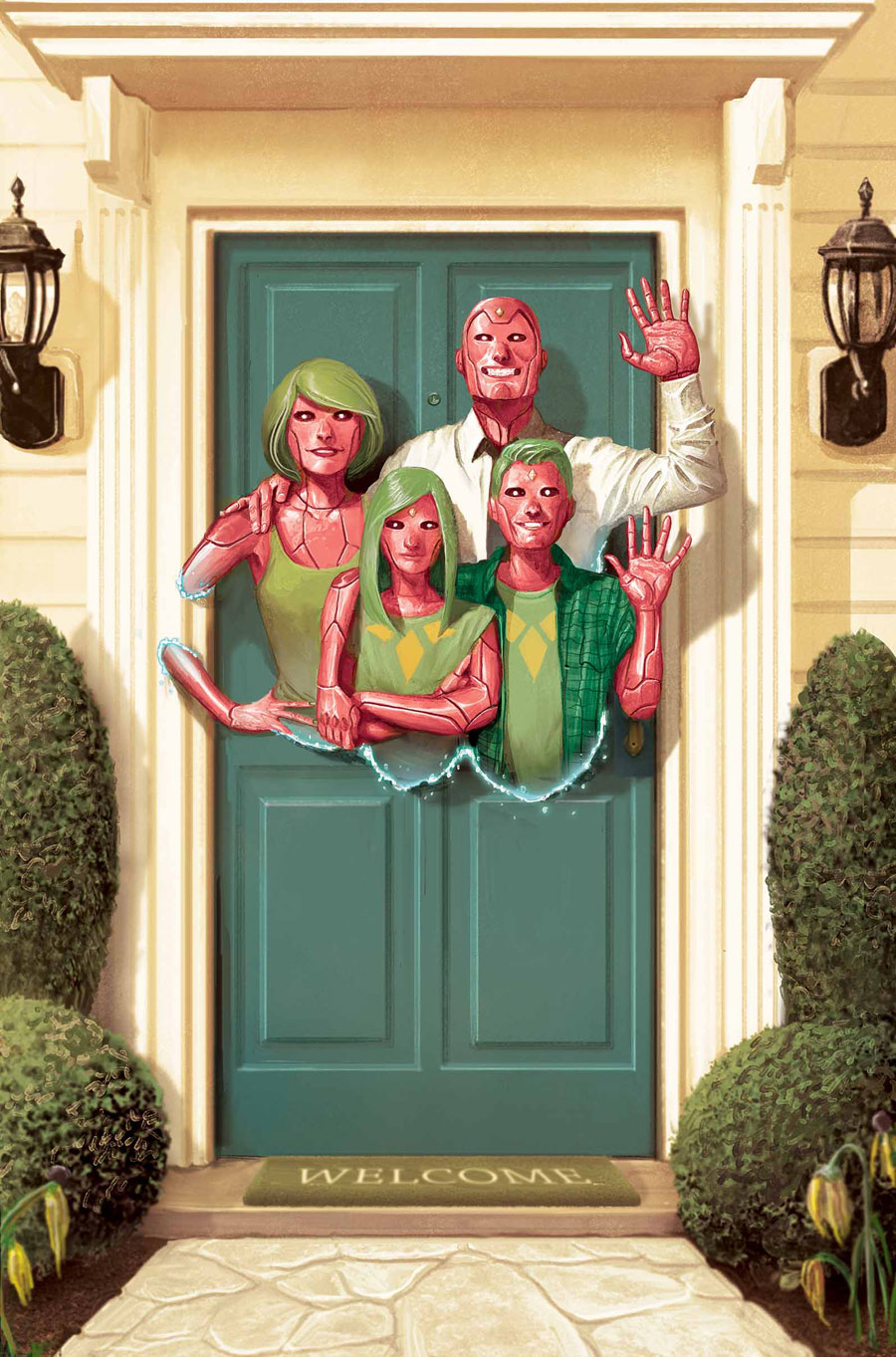 After making his big-screen debut in Avengers: Age of Ultron, it was almost guaranteed that the Vision would have a stronger presence in Marvel’s publishing line. And, like clockwork, a few months later, here we are: “The Vision” is a book that examines the line between what we consider real and what we consider ‘fake.’ It will also greatly disturb you. Keep reading for our spoiler free review. 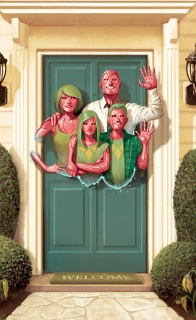 The Vision wants to be human, and what’s more human than family? He goes to the laboratory where he was created, where Ultron molded him into a weapon, where he first rebelled against his given destiny, where he first imagined that he could be more, that he could be good, that he could be a man, a normal, ordinary man. And he builds them. A wife, Virginia. Two teenage twins, Viv and Vin. They look like him. They have his powers. They share his grandest ambition or perhaps obsession: the unrelenting need to be ordinary. Behold The Visions! They’re the family next door, and they have the power to kill us all. What could possibly go wrong?

Looking at the cover, it could be easy to see it as an allegory or a joke but that’s not the case. The Vision is attempting to create a normal life, and so he assembles the American dream in a nutshell – wife, Virginia, two kids, Vin and Viv, beautiful suburban home, and a government job. He is trying to make his life look like any other, and does about as good of a job of it as he could. You know, because he’s a maroon android.

The book begins with shadows against a door, a perfect metaphor for Vision’s central purpose – his life bears the outline and shape of normalcy, but is far from normal. The first third of the issue is made up of a visit from the neighbors who, bearing cookies, introduce themselves to the new family on the block. George and Nora represent the two sides of suburbia in a nutshell: you’ve got the ‘welcome, neighbor!’ rejoinders alongside the suspicious gaze. As a lifelong resident of the New York area suburbs, I can attest to this – the new neighbors are given a sheet of brownies and a few weeks to reveal their weirdness before the neighborhood just decides to make it up on their own.

The Visions attempt to present a home that is both normal and extraordinary – alongside a coffee table and Venetian blinds are relics from pop’s life as an Avenger. They are not hiding the fact that they are synthezoids, but they want that to be the only part about them that is different. A large portion of this issue is spent on matters of language and normalcy. In fact, it almost becomes a comedy of manners at different points, with Vision and Virginia arguing over the difference between nice and kind, or George and Nora debating whether you bring cookies to a family that doesn’t need to eat.

The Vision, as a character, is one that is very tied into family. Technically the grandson of Hank Pym, the son of Ultron, the twin of Wonder Man, the ex-husband of the Scarlet Witch – I could go on and on – Vision is someone who has longed to belong but hasn’t been able to for a variety of reasons. This attempt at being a part of a family seems to be, in some ways, a reaction to him feeling so alone that he has to create more creatures like him, because he fears those are the only people that will truly accept – and not fear – him.

But that doesn’t really work; we see that his creations are almost too good, as he gently argues with his wife, has to reprimand his kids, and he wakes up in an android version of a cold sweat.

One of the aspects of the book that is so perfect is the sense of dread that is present in every single panel, but it shows itself in vastly different ways. Sometimes the fear comes from how false the Visions appears – like on the title page/cover. Sometimes it sneaks in from Virginia’s disapproving glance; other times it is from how others react to seeing the Visions out in the world. Sure, this is presented by Tom King in his script, but Gabriel Hernandez Walta really brings that in with each and every panel.

Walta’s pages appear to have terror around each corner, and you would never be surprised to turn the page to see a character screaming. When that eventually happens, it doesn’t shock; it is almost a relief. When you’re expecting to see horrific events, and you instead get homework and sleep troubles, it can be almost worse than getting that startle. Walta’s Vision, in costume, is extremely Kirby-esque. The Vision – the superhero – is presented that way that comes directly from the King; Kirby could drawn heroes in a way that made them look majestic, powerful, but also out of place in the world. There is a panel where the Vision is in the Oval Office, and he sticks out like such a sore thumb that you can’t help but understand why the President would feel both safe and scared in his presence.

But Walta’s greatest work in this issue is bringing emotion to the robotic faces of the Visions. This is always the difficulty with making the Vision a compelling character – how do you show him feeling things without altering his iconic (and wonderful) design. We’ve all seen ‘Vision was emo before emo’ posts, and while that might have been true in the past, Walta and King have presented such a compelling version of the character that it acts as a road map for what should have been done years ago. Seeing his eyes, lacking any emotion, alongside his sad thoughts doesn’t come off as whiny or bratty – as he has in the past – he just comes off as sad. His sadness is such a part of who this book’s Vision is, that when he tries to present a happy face, it is absolutely heartbreaking. Re-reading the issue, when you see the family’s introduction to George and Nora, it makes you want to cry.

There are a few details I am purposely not talking about here, out of a desire not to spoil anything. One of those is a ghastly discussion of the future of some of our characters, and the other is a visit from a member of one of the Vision’s other “families.” Those moments are, perhaps, the most important in the entire issue, as they raise questions that take the themes of the book and take them to the nth degree. How ‘human’ are the other Visions? Can they be trusted? Do they understand the world they live in? Do they want to?

When I put this book down, I was shaken. I was intrigued. I wanted more. I sympathized with the Vision – who hasn’t felt like they didn’t belong? – but I also sympathized with George and Nora. (I hate this phrase) As a parent, I don’t know how I would feel if the Visions moved in down the block. I’d like to believe that I would be welcoming, but who knows?

The Marvel Universe has always portrayed itself – for better or worse – as being ‘our’ world, plus superheroes. And King and Walta have, I feel, rather accurately shown how ‘we’ might react to having a family of androids move in the neighborhood. There probably wouldn’t be a protest, there probably wouldn’t be an “ANDROIDS GO HOME” sign on their front lawn. There would be a lot of Facebook selfies with the Visions, and neighborhood chatter, and a sense of unease that would creep into the neighborhood. This book is one of the more accurate representations of what it must be like to live in the 616 – and I’m damn glad I don’t.

Final Verdict: 9.0 – A stunning debut issue; among the year’s best.