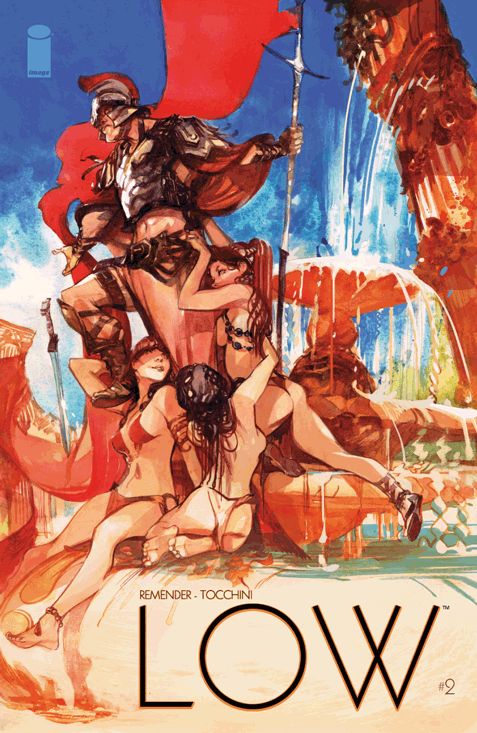 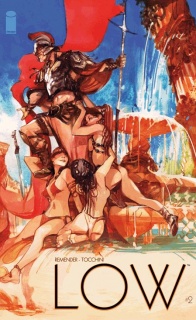 Ten years after Stel’s daughters are kidnapped and her husband’s murder by anti-Helm forces, we return to the remaining Caine family. Marik, the remaining son, is anything but a nice cop. Stel barely leaves her room within their increasingly toxic world. But something is about to change Marik’s and Stel’s choice to stay here.

In the land (or waters) of Salus, issue #2 opens with the ten year anniversary of Stel losing her daughters and husband. Focusing into her home, we see Stel living within her grief, watching virtual memories of her past safely in her tower-home (in an underwater world depleting of oxygen). Stel calls her world “shipwrecked by the pale comfort of ancient memories”; in fact, she talks mostly in metaphors, which in another hand could become borderline sentimental, but Remender’s choice to lead with a confessional, poetic Stel in this issue works.

After her last issue’s assertive, leader-tone, we can see a new side to Stel. We miss her wit over her husband’s sexual abilities in bed, but that humor is a part of her loss now too. Writing Stel’s voice in a poetic tone humanizes her as she struggles to define grief, like it too is a battle she could win if she could just know how it works.

As Stel confides in us, calling her home a “grave memorial,” we soon realize it’s not us she is trying to express this inexpressible pain to, but to her son Marik through a phone-call. Remender and Tocchini’s ability to capture a wandering, aimless feeling into direct images gives us a hint to the depths of pain Stel feels, but its dismissal from her son Marik gives us a wider view of her loss. It’s not just Stel’s tone or narrative that creates this clear impression of Stel, but the disparity that exists within her grieving process and her son’s grieving process. 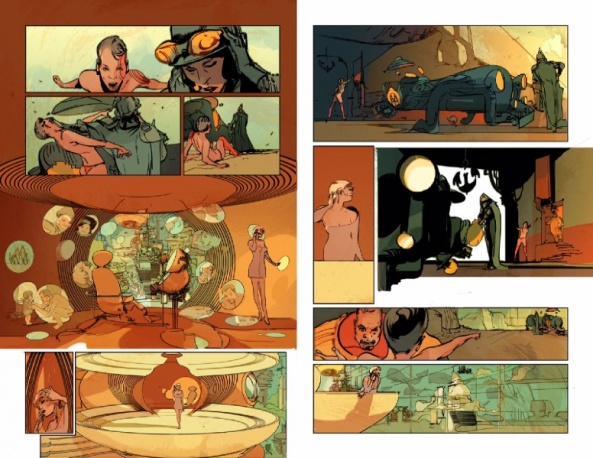 Marik’s grief, paralleled panel to panel with Stel’s, lends us a keen eye into their family’s disconnect and conflicting pains. As Stel dreams of heads, and floating arms, we see Marik, now a cop, “****ing” a prostitute in a back-alley like a great Roman emperor under a drug-like euphoria. The contrast between the ethereal pain of Stel, and the gritty pain of Marik reminds us readers that this is a tale not about loss, but how characters deal with losses. In seeing how Stel and Marik cope with the loss of their family and the means they take to feel better, we begin to see how finding a world of possibility and showing someone a world of pain to relieve your own are choices made by individuals, not fates.

Tocchini’s impressionistic, dreamy renderings gives “Low” its full-body depiction of loss. Tocchini’s style is consistently surprising as his low-detail, broad strokes and soft palettes can be used as ironically as it is illustrative of pain. Tocchini’s depiction of Stel’s home balances her speculative talk of grief by showing it in modest pinks and yellows and browns, showcasing plastic bubbles (resembling mirrors) holding recorded past memories with her family. Choosing soft pastels and broad strokes, Stel’s futuristic world is bittersweet, as the outline of a flower in her hand is as distinguishable as the face of her daughter in the virtual bubble behind her, displaying her laugh. But this soft style can also give undertones of sorrow that are surprising to the reader caught up in its Jules Verne story-book-like appeal. For instance, when Marik is having sex with his prostitute we can see the glory of a sunny Greek palace in glowy hues, but this light impression is quickly shattered as the panels shift into a heavily inked, purple-hued backdrop.

There is still much within the world of “Low” to uncover, but taking time to explore its depth of characters will no doubt serve to help the audience follow the next adventure with a firmer sense of direction. Although the stakes of the world are yet to be uncovered (why are we in this world, when was their choice made, how many factions exists against the Caines family, etc.) we do not need those answers just yet. What we do need, and what this issue does deliver, is an insight into the state of mind of its leading character on a quest that we can all relate to: how to surface from unspeakable depths of pain, when the world is going to end anyway; when it could just as well not matter. How can hope help anyone?

Tocchini and Remender may have started their tale with bravado — telling the history of the Caines people, showcasing a DNA-operated specialty helm-suit, displaying the class and racial divides of this underwater society spanning worlds — but this issue is all about inspecting the remains after their main protagonist, Stel, has lost all that she cared for in the world. By putting her into the series driving seat, or probe-chaser, we are forced to not only question the world, but also examine the strength of Stel’s choice to continue to find answers. As Stel’s husband says best, “We start off terrified, and we earn our confidence.” How the hell does/will someone get over a loss like Stel’s, in a world where options for hospitable planets are as negligible?

Stel hopes. We will have to wait and see how hope does matter.

Final Verdict: 8.8 – a storybook of loss and desire; an introspective tale of hope at the end of the world; a patient tale rearing up for an inter-planetary battle soon to come