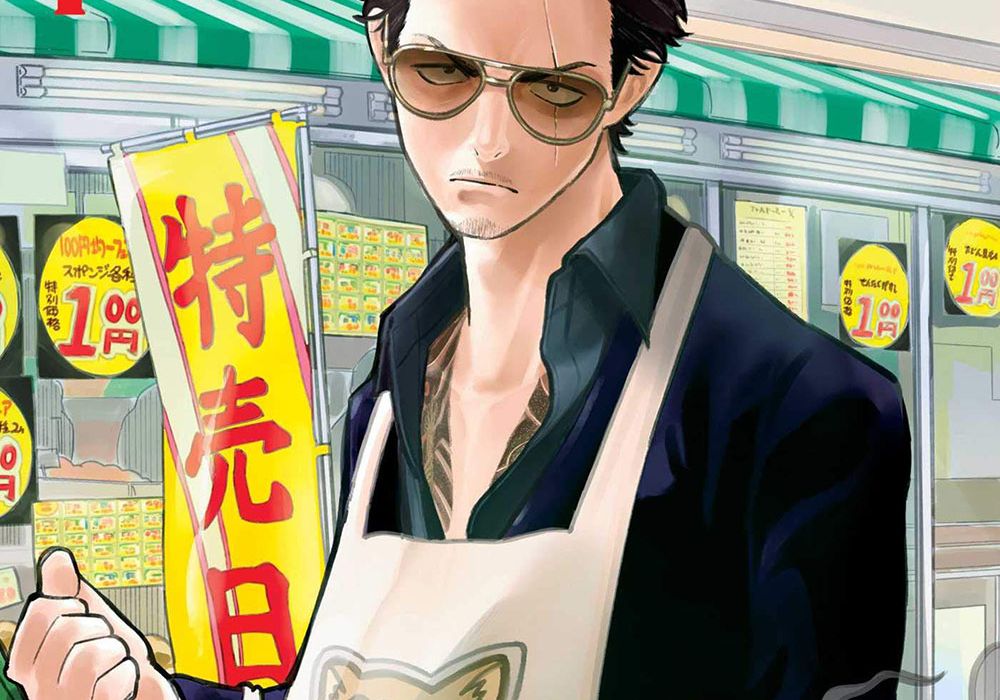 “The Way of the Househusband” is funny – and not necessarily in the way that I expected it to be. It’s subtle, not overt. The gist of the series is this: a former notorious yakuza member, nicknamed “The Immortal Dragon,” has left his life of violent crime in favor of a quieter lifestyle as a househusband to his wife who, in a feminist-approved twist, is the breadwinner of their 21st century marriage. VIZ, who publishes the manga, describes it on their website as a “cozy yakuza comedy,” which is literally the perfect summation of a series that is strangely relatable despite its seemingly non-relatable premise. As someone stuck between that weird life phase of not-quite-child-but-not-quite-adult, it really spoke to me, which felt… strange, considering. And yet. 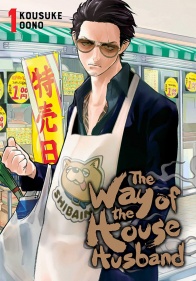 Cover by Kousuke Oono
Written and Illustrated by Kousuke Oono
A former yakuza legend leaves it all behind to become your everyday househusband. But it’s not easy to walk away from the gangster life, and what should be mundane household tasks are anything but!

In volume 1, we meet Tatsu, a.k.a. The Immortal Dragon, in his home as he readies himself for the day. It’s a great way to establish him as a character; creator Kousuke Oono, through his depictions of Tatsu’s tattoos, knife (placed so its hidden in the back of his shirt, of course), and cool guy outfit complete with sunglasses shows that he’s a force to be reckoned with. But soon he dons his Shiba Inu apron, and we quickly realize that nefarious knife is actually being used to make an adorable bear-themed bento lunch for his wife.

What comes next possibly makes it the best cold open to a series that I’ve ever experienced: Tatsu, former feared gangster, contorting his body to take the perfect picture (presumably for Instagram, or something) of his teddy bear bento while the family cat looks on, transfixed. We’ve all been there, or at least I have. I literally laughed out loud. Yakuza, they’re just like us!

One of the things I commend Oono on is his ability to make mundane activities like visiting the supermarket and watching a neighbor’s child gel with Tatsu’s gangster past, which seems to want to catch up with him at every turn. These two disparate worlds – that of the yakuza and that of the househusband – are merged together in Tatsu, who’s full commitment to his new life while remaining a badass is able to convince the reader early on in the premise’s believability. And of course, there’s the humor inherent in that; Oono spends a lot of time taking traditional yakuza manga tropes and turning them on their head by placing them in Tatsu’s scenes of domestic bliss. For example, Tatsu threatening a salesman with a knife that he ends up using to make the salesman a delicious lunch. One scene that particularly spoke to me is after attempting to clean his apartment with a roomba, Tatsu’s cat freaks out and knocks over everything on the counter, including a bottle of red wine. This leaves Tatsu “bloody” and lying on the floor, his last breath used to apologize to his “boss” for screwing up. It’s absurd and silly and surprisingly well done, both as a scene of the everyday chores/chaos we all partake in, as well as a recontextualization of familiar gangster tropes. It’s the subtlety of the humor that really plays well; the scenario is silly, but not so overdone as to be ridiculous. You can tell Oono really enjoyed coming up with these scenarios, almost as much as I enjoyed reading them.

Besides the subtlety of the humor, another strength in “The Way of the Househusband” is its art design. It’s a nice manga to look at, with characters that are attractive and varied, and conveys dramatics in the action without completely taking you out of the homemaker plot. When you linger on the page, taking a moment to chuckle at the face of a yakuza who’s completely engrossed in his former colleague’s culinary skills, you know the illustrator did his job.

One thing to note: this series is more slice of life than a continuously moving plot, which at points can make the pacing feel slow. I wasn’t expecting this, which at first made me wish for more development than I was getting, particularly in the relationship between Tatsu and his wife (Who calls him Tacchan! I desperately want to know how she was able to tame this wild yakuza’s heart to the point that he’s content to wander the streets in an apron in search of the freshest vegetables and rarest anime merch). Still, the chapter vignettes are so charming that it’s easy to move past. And you do eventually get a tiny bit of insight into their marital background and a decent amount of Tatsu’s yakuza origins. Still, there’s a lot more that needs to be explored. Luckily, Oono makes you excited to keep exploring it. This manga is a delight.