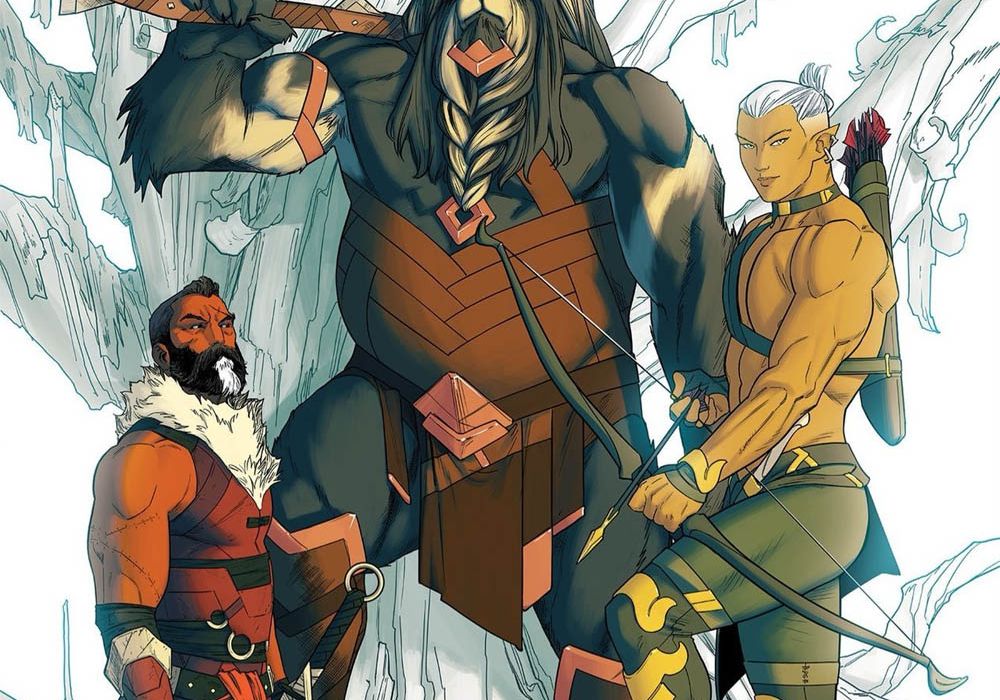 When creators in their prime band together to create a comics supergroup, something magical is often born. When Chip Zdarsky, Kris Anka, Matt Wilson, and Aditya Bidikiar team-up to make a queer fantasy tale of parenthood amidst the background of war, people turn their heads. Let’s see how this one unfolds. 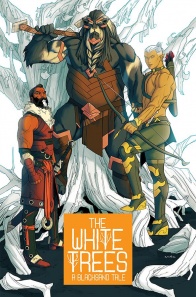 Acclaimed Daredevil writer CHIP ZDARSKY teams up with superstar Runaways artists KRIS ANKA and MATT WILSON for this spectacular OVERSIZED TWO-ISSUE MINISERIES! In the fantastical world of Blacksand, peace was hard-won, and three unbending warriors carry the scars to prove it. Now, almost twenty years later, their children are missing and war is on the horizon. Can they put aside their memories of the war—and each other—for one last adventure?

Zdarsky isn’t known for sweeping fantasy epics, more for delivering emotional and personal laser-focused stories. We get more of the latter here, which is a good thing. Blacksand is an interesting setting complete with its world-map, warring nations, and diverse, otherworldly ecosystems, but it’s never the forefront of the story. We get setting mostly from the beginning of the text, with King Pherak alluding to an inevitable war and tensions between the countries of Blacksand, which is enough of a base to build from. I’ve found the best kind of worldbuilding evolves and is told naturally with the primary plot, which is what happens here. It’s through interacting with Krylos, Scotiar, and Dahvlan’s dramas that we learn about enslaved dragons and Siren-esque spirits. Showing Krylos’ connection with a dragon because they’re both figures that have a dangerous reputation is much more effective than a block of text would have been.

Our protagonists not only can carry worldbuilding on their shoulders but also manage to be nicely fleshed out (metaphorically and visually, thank you, Kris). Krylos is the focal point of the narrative, a man scarred by the death of his wife and his horrific actions from years bygone. He’s not only a tragic figure, but Krylos is also scorned by his daughter and society for his actions and society. Yet, he’s hardened with an emotionless resolve to find his son, something which Zdarsky plays upon nicely throughout the text to make sure we sympathize with him. The other two of our trio of protagonists, Scotiar and Dahvlan, are former warriors with questionable paths like Krylos, yet the two have eloped after the former’s separation from his wife. The chemistry between them is fantastic, with Dahvlan playing the gentle giant role in the relationship who’s quick to get emotional, and Scotiar the wily, sassy foil who bears his emotions through a playful snark. Rarely ever do they explicitly state their love together, but their actions, like their escape from the spirits’ temptations, show them as more of a power couple than words ever could.

Anka here channels Tolkien-style fantasy art and filters it through a more playful, Final Fantasy-influenced style. There’s a focus on a detailed yet clean style here, with the characters naturally being the focal point of every scene as Anka excels with their designs and visual emotions. Each character has an outfit that cleverly reflects their personality: be it Scotiar’s shirtless and more playful archery gear, Dahvlan’s dad-bod accompanying leotard, or Krylos’ no-bullshit vest/tunic combo. This level of detail is also reflected in their physical appearance and emotions. Krylos sports a heavy-set beard, and as such, we rarely see any emotion or smile from him. Dahvlan’s carefully knit beard braids and hair match his pride in his ability and his level of care for his daughter, and we see this in his interactions with Scotiar.

Since Zdarsky gives us traces of worldbuilding here, we see Anka fill in the blanks with solid environmental and setting work. From the moment the book opens, we are immersed in fantasy culture. Krylos picks a flower of otherworldly blues and purples with twisting features. He then travels with an envoy into a giant city, which Anka packs with lots of neat visual details: there’s lots of Japanese/Eastern-inspired architecture, and the buildings are mingling with the clouds, suggesting a high altitude or perhaps even a heavenly attribute, considering the royal nature of the city. We even get little details like a single panel of Krylos walking through the palace halls, next to statues of bygone kings and paintings of our three protagonists in their primes, telling us all about their exploits before we’ve even met two-thirds of the crew. Anka is great at injecting little details like this into the story, and it gives the book a lot of life and reason to be revisited.

Wilson’s colors give the book a luminescent, surreal fantasy glow, which is glorious to take in. Having the opening scene set at dawn gives Wilson ample opportunity to flex, with the debut page giving us lots of faded but glowing blues, amber reds and golds textures of Krylos plucking a flower from the fields, supplying much of the emotion of the scene. The next shot of the royal city is equally beautiful, with Wilson having the early sun glint off the magnificent gold of the rooftops whilst simultaneously lighting up the clouds. Wilson continues this glorious fantasy palette throughout, giving us the opposite side of the spectrum with blues and magentas in the tempting spirits’ forest, with lighting that suggests the place is a little haunted, but more focused on pleasure. Bidikar does some great lettering work here too, leaning right into the fantasy aspect of this book. The showdown with the dragon feels huge not just because of Anka’s art, but because of the wild, brush-stroked roars Bidikar writes into the background of each shot. Contrasting this, we get some great subtle sound effects, like the careful but considered ‘ssswfft’ of Krylos shooting an arrow into a forest, which Bidikar pens into the wake of the arrow’s shot.

“The White Trees” #1 is a massive flex from some of the industry’s best current creators, and I am so on board for it. There’s a great fantasy backdrop that never overbears into the story, the characters are interesting and play well off each other, and the visual design is top-notch in characters, environments and more. It’s the kind of project that I’d be glad to see more creators adopt: short, yet super condensed with fantastic ideas and even better execution. Get on board this while it’s hot because damn, it’s hot.