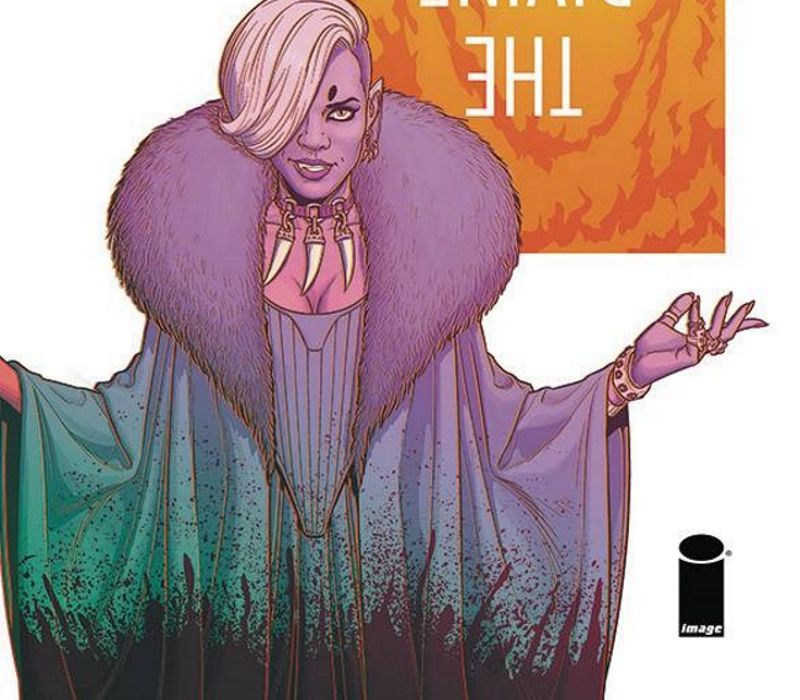 Once again, we return, with another issue of “The Wicked + the Divine.” This month’s issue kicks off the second half of the “Imperial Phase” arc. Where the first half was mostly about our favorite gods and goddesses behaving badly, “Part II” looks like it’s going to be about the consequences. Specifically, we’re going to find out what will become of Sakhmet now that the world knows she’s a cannibalistic serial killer. 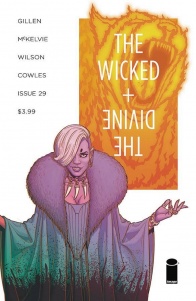 NEW STORY ARC Regrets, I’ve had a few, but then again, too many to fit in the scant time I have remaining, so what’s a girl to do? The party’s over. The party never ends. A hangover that just won’t go away opens IMPERIAL PHASE (Part II). Heaven help us all.

The plot of this issue mirrors the early issues of the series in a number of ways. The manhunt for Sakhmet allows Laura to interview most of the surviving gods one at a time. Each interaction quickly diverges, and gives the creative team a chance to advance each of the individual storylines.

Baal and Minerva for example, are training in the Danger Room. They’re the only two with their eye on the prize, looking past the dispute-of-the-week at the greater threat of the Great Darkness. Woden is tinkering and being an arsehole. Morrigan is holding Baphomet hostage somewhere in the Underground. The Norns are desperately trying to find Sakhmet. Dio is desperately trying to find Baphomet. Laura is halfheartedly investigating, but mostly hooking up with Luci cosplayers.

It’s a good structure. Since all of the gods have such well-established voices and visual motifs, it’s a pleasure to zoom around and spend a few pages with each of them. It’s a good way to bring us back to the new arc, and the pace is punctuated by looks at Sakhmet, who up until now has been the most one-note of all the gods. The added focus doesn’t really deepen her character much, but it makes her feel more substantial. Plus, McKelvie and Wilson get to draw a full page of a Skahmet concert, and it looks like a hell of a time.

One thread that needs some added focus is Morrigan’s. It seems we are going to get it eventually, but right now there’s dissonance between the way the characters are reacting to her abuse of Baphomet and the way they act the rest of the time. “We fought,” she said, “I won.”

I certainly don’t endorse domestic violence, but I didn’t see the Pantheon freaking out when Baal was beating Luci with his thunder fist. Later in the issue, Laura uses her magical vines to whip a groupie right out of her apartment. WicDiv is inconsistent with how it portrays violence, and Gillen and company need to take some more time to establish how Morrigan’s constitutes abuse, and what makes it so different from everyone else.

Major props to the art team though. You’ve never seen such a well rendered inky blackness. The way Wilson draws the shadows of the Underground gives it a texture beyond flat black panels. It seems to have architecture and substance, particularly the panel of Dio sitting cross-legged in the void.

We also get to see the origins of Laura and Sakhmet’s relationship, and it’s established as indeed a relationship. Weirdly, Cassandra seems more concerned that Laura was dating Sakhmet than about anything concerning the Laura-Morrigan-Baphomet love triangle. She delivers this news with her characteristic lack of tact. McKelvie demonstrates why he’s the best artist to work with Gillen. Even a scene of two (spectacularly dressed) women arguing in the street is a visual feast. Their changing facial expressions are so dramatic, they feel like action beats, and the panels zoom in on them melodramatically enough to hit with impact.

I’ve been too surprised by WicDiv in the past to try and make a solid prediction of where this is all going. There’s a palpable sense of doom in the air, and I can’t conceive of us getting out of this arc without at least one more god dead. As I said, this is the arc about consequences, and someone is going to pay for what they did. In the unfair world of WicDiv though, that’s not always the deserving person. Dio feels like he’s in some danger, and Baphomet’s absence makes me sick with worry. Is he already dead? Plus there’s the looming threat of the Great Darkness, which we were gently reminded of so it can swoop back in and ruin everything.

“Imperial Phase Part II” is already looking like a good one, if not a great one. It’s the resolution after the set-up. This creative team has been together forever in modern comic terms, and they operate like a well tuned machine. I know the mind-boggling amount of work that goes into every issue of WicDiv, but issues like this one make it look effortless. The team has spent years honing their comic making skills, and now we get to sit back and watch them do their magic.