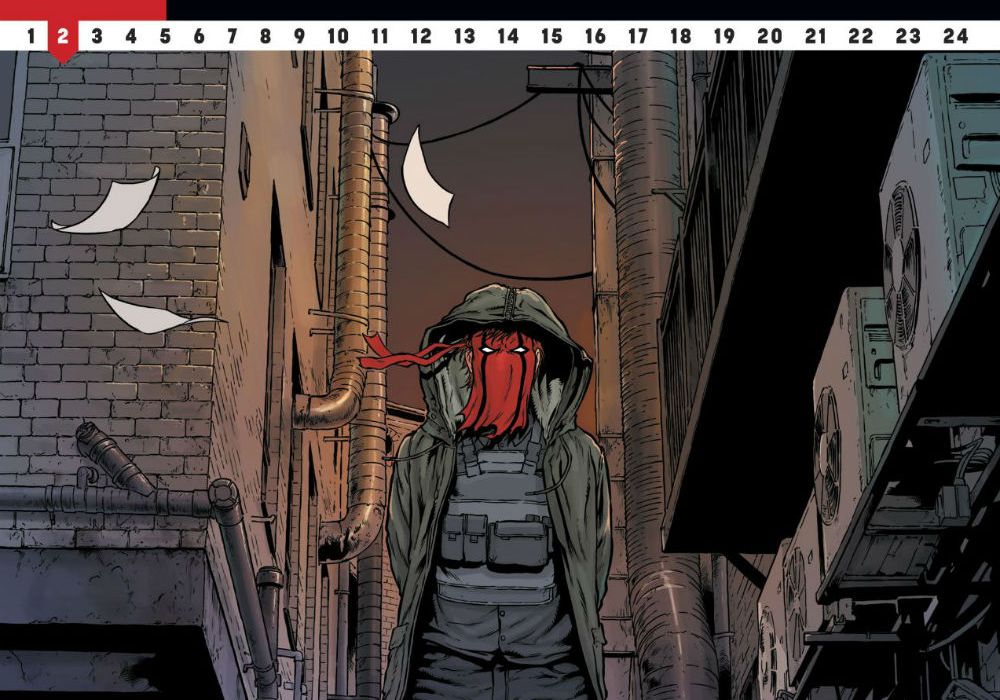 For a series that includes the words “wild” and “storm” in the title, this issue operates with a surprising level of restraint. Those looking for flash can look elsewhere. Here, Ellis and Davis-Hunt craft the methodical next steps in their universal reload – next steps taut with all the mounting tension of a thunderhead building on the horizon. 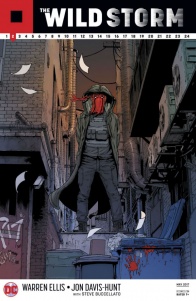 All Angela Spica did was save someone’s life. And now hers is over. The rogue engineer lies bleeding in a place she hopes nobody will find – but she’s wrong. The people embedded in the secret power structures of the world are tracking her. Skywatch. Halo. International Operations. A covert operative called Grifter.

If only she hadn’t unknowingly foiled an assassination planned by her boss. If only her boss wasn’t the one person more interested in the Engineer’s transhuman implants than in her life. It’s all going very wrong, very quickly. There’s going to be more blood.

“This world is being secretly run by a tumor that started out as an intelligence service.” If you’re parsing “The Wild Storm” for Warren Ellis’s latest manifesto, then your ears will probably perk up at Jacob Marlowe’s stab at IO – International Operations – as he and a small team ponder their next moves on rooting out the source of his assassination attempt and finding his robotic savior.

But lest you figure Marlowe for a lighthouse standing in this dreary fog of all-powerful organizations and their clandestine machinations, Ellis writes a corporate hitman who confides to his therapist that, “Broken things stay broken,” and laments how Marlowe’s company Halolife markets super solar panels to the rich at the expense of providing electricity to the poor. Broken systems – in this case, economic disparity – stay broken, regardless of technological advancement. And Marlowe is, at the very least, complicit in that system, if he doesn’t help perpetuate it outright.

So yes, Ellis and Davis-Hunt’s forecast is bleak. This is a world so shaded in gray that through every open window ashen clouds can be seen gathering and brewing in the sky. Leaders of the global all-powers make decrees from tiny concrete bunkers or in glass towers looking down on cityscapes. And a selfless act of heroism leaves a young woman crying and alone.

“The Wild Storm” #2 starts with Angela seeking solace in an abandoned military base. Her plod through the rigid confines of Davis-Hunt’s nine-panel grid – mostly, he merges some of the panels together here and there, but the basic structure remains intact – sells her isolation so well that when he finally sits her down and draws tears glistening down her cheeks we’re never certain if they’re from the physical pain of transformation or the realization of just how fierce a whirlwind she has called down upon herself.

Davis-Hunt matches that sense of detachment with his reintroduction to Lucy this issue. Positioned center panel, she’s the lone person behind a computer monitor in an entire sea of empty desks on her office floor. Eventually tasked by Skywatch to track down the mystery woman, Lucy’s not thrilled at bringing in the samaritan for what she figures are less than altruistic reasons. “A good code for living begins with ‘protect the deserving, no matter what,’” she says. We can take her words to mean Angela saving Marlowe, or we can read them to possibly foreshadow Lucy herself as Angela’s savior. Either way, maybe Ellis isn’t quite the pessimist after all.

His script focuses on the aftermath of superheroics in the context of this world. So instead of flying robots, Davis-Hunt gets to draw the different factions engulfed in fierce conversations as they each plot their convergence on the rogue engineer. But the character acting is a highlight of “The Wild Storm” #2. He paints stress in people’s eyes and he sells tension with fingers kneading foreheads, hands running through hair.

Neither Lucy nor her boss are pleased with the directions Skywatch has given them. Davis-Hunt shows them washing the bad taste from their mouths with a bottle of vodka. Handling the tumblers, refilling the glasses and knocking back the liquor keeps their hands busy enough while they talk that the scene never really feels as dialogue heavy as it actually is. This issue favors talk instead of action, but it’s never over-expository. It’s seems authentic to their characterization that these men and women would all carefully measure their reaction to Angela.

There’s even a faint semblance of Frank Quitely in Davis-Hunt’s delicate lines. Seriously. Not in the exploratory, boundary breaking sense, but in that detailed, minimalist style – think of the quieter moments from “Jupiter’s Legacy.” None of his panels are busy; there are no extraneous marks on the page and very little embellishment to his scenes. But it’s an assured hand that achieves such clarity with such simple lines. Eyes will easily glide over the artwork, but an extra second’s pause will bring out subtle details like Marlowe’s figure peering out the upper left window of a dilapidated warehouse or an open water bottle left to spill at Angela’s feet as she shudders in her solitude.

“The Wild Storm” #2 is mainly build-up to a three-way collision. But it’s productive build-up – both in illuminating the mission statement and in loosely sketching motivations for the key power brokers. Where most superhero books deal in bombast, this one trades in unease. There’s tension without release.

There’s a storm coming alright. Make sure you’re here when it hits.

Final Verdict: 8.0 – If Warren Ellis keeps writing like this, he should get an entire line. Wait, what…