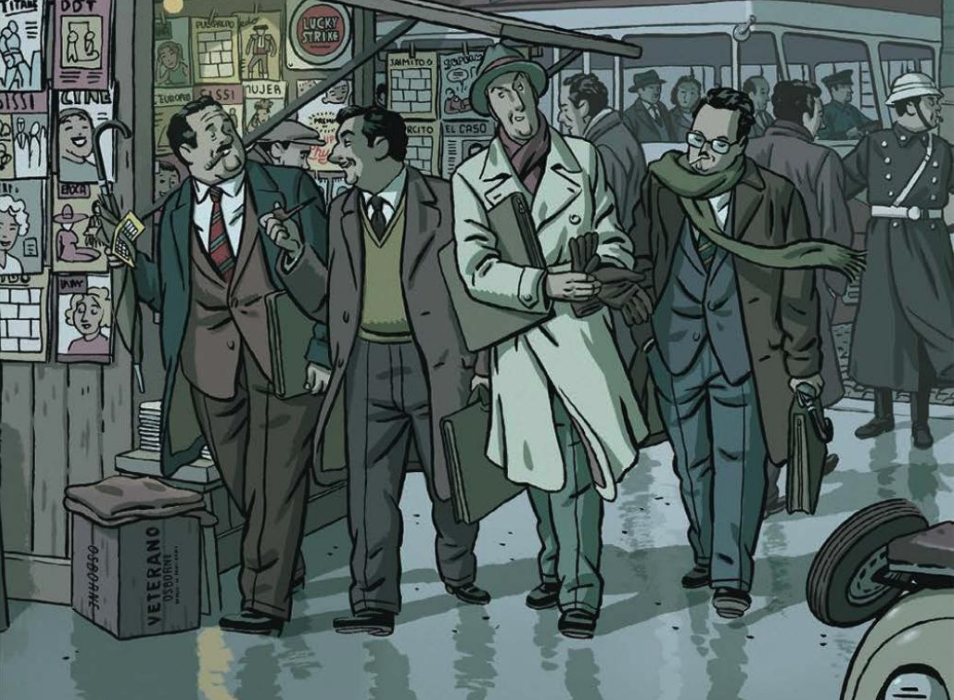 An able teller of subtle tales, Paco Roca retraces a pivot point in Spanish comics history in “The Winter of the Cartoonist” (Fantagraphics Books), showing with Mad Men-like nuance that there was nothing subtle about the forces shaping that vibrant and yet exploitative industry in the winter of 1957. Though specific to the cartooning heroes of Roca’s homeland and chosen discipline, this story of a breakaway to independence, Image-comics-like, by a handful of creators, isn’t just for the niche enthusiasts or the people who know what tebeos are (a club I just joined). 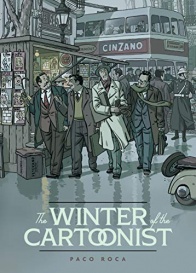 Written and Illustrated by Paco Roca
A graphic nonfiction story of the five extraordinary cartoonists who decided to rebel in the aftermath of the Spanish Civil War and WWII.
In 1957, Editorial Bruguera was one of Spain’s largest publishing houses, putting out hugely popular weekly magazines and comics for young and old — while retaining all rights and creative control of their artists’ work. Spanish comics superstar Paco Roca investigates the true story of five cartoonists who, spurred by poor working conditions, arbitrary editorial edicts, and nationwide dictatorial rule, went on a quest for creative freedom. Little did they know that the corporation had begun actively trying to thwart their distribution and publishing efforts, turning their battle into a real-life David and Goliath tale.

Perhaps the most significant of these artists in the English market has been Paco Roca, whose Eisner win for “The House” this year cemented a status already established with “Wrinkles” (2016) and “Twists of Fate” (2018). Roca makes beautiful comics. Unpretentious. Patient. Character-driven. Momentously mundane.

Frequent translator Andrea Rosenberg partners with Roca again on “The Winter of the Cartoonist” to bring artful, sometimes terse but pregnant dialogue to the book’s large cast of artists, editors, office workers, and the vivid surrounding mid-century Barcelona.

Roca gets to tell a story that, his Afterword explains, he has “always wanted to create.” As a child in Spain, Roca read the colorful comics in the tebeos (comics magazines) published by Editorial Bruguera and wondered about the cartoonists who brought characters like Zipi and Zape or Captain Thunder to life.

That curiosity spills out of Roca’s pen in “Winter of the Cartoonist,” where the current-day Spanish cartoonist applies his talent for noisy group scenes, taut exchanges, teasing banter, or contemplative solitude to this behind-the-scenes glimpse, the rare historical comic that is as literary as it is informative.

The “Winter” referred to is the turning of 1957 and ‘58, when, as a group, five of the major comics creators at Editorial Bruguera, dominant publisher of Spain’s comics magazines, defected from the powerhouse to start their own magazine on their own terms. Not long after, they return to the publisher, professional tails between legs. Roca jumps back and forth in time between ‘57 and ‘58, illustrating the fast-rising hopes and quickly-crashing disappointments of these independents at the heights of Francoist cultural centralization in Spain.

We watch the intrepid cartoonists toast to their brave new venture. We see the shenanigans of the publisher, machiavellian if not villainous, to sabotage their new rivals. We meet the replacements, brought it to prove just how expendable artists are to the corporate machine. And we are privy to the office flirtations and card table antics between these businesspeople and creatives, grasping up and down along these commercial ladders. The mood, like much of Roca’s work, is one of softcore tragedy, heartbreaking nostalgia, and wistful memory.

It’s daring for a cartoonist to pay this kind of tribute to a collection of cartooning greats; their imprints on the form must leave intimidating tracks. Roca aroused my curiosity enough to go on a Google-led search for the comics of Josep Escobar and José Peñarroya and the others of the Editorial Bruguera stable. They’re indeed a versatile cadre, surely Spain’s equivalents of our Harvey Kurtzmans and Walt Kellys. But Roca’s style, more Jason Lutes or Adrian Tomine than Mort Drucker or Charles Schulz, is perfect for depicting the human comedy of these cartoonist lives, a fitting, mature tribute to makers who had to make their living in kids’ fare.

“The Winter of the Cartoonist” employs the single-shot, “still camera” series of panels the way it should always be used. In one sequence two-thirds of the way through the book, a flashback to an upper room gathering in newly minted offices, bathed in dawn (or dusk) sunlight, the same scene of the five around a table shows widescreen panels with nary a shift in angle, but the room is alive with action, intentions, wine-drinking and cigar-smoking and optimism. Roca is very good at drawing people who aren’t isolated from the built environments around them, the others who surround and constitute them, the passage of time through which they feel feelings and dream dreams.

Much of the visual auteurishness of Roca’s art can be credited to his colors. Flat and pastel but wonderfully tuned to weather and mired in mood, Roca’s colors create that cinematic sense of a pseudo-reality that feels realer than real reality, like the most skillful cartooning often does.

And what of the book’s subjects? Does this band of creators (for the record, Escobar, Cifré, Giner, Peñarroya, and Conti, who left Editorial Bruguera to launch the shortlived Tio Vivo) merit our attention? Does Roca succeed in making us care if we are previously indifferent to Spanish comics history?

I’m not sure that “The Winter of the Cartoonist” can win over casual readers the way “Wrinkles” or “The House” can. Those books plied some pretty universal emotions and circumstances. Apart from those interested in Spanish comics history, though, the other audience will be those who can viscerally feel how discordant it is that comics should mean so much to us but are regarded so little to the general public or corporate overlords. (So everyone reading this review.)

For those of us fascinated by cartoonists as the beleaguered geniuses of this socially devalued art form, and what it says about us that we historically and currently failed to know how good we have it, and how the repeated story of creative autonomy squashed by economic power should keep being told as warning AND inspiration, Paco Roca has given us another worthy story.