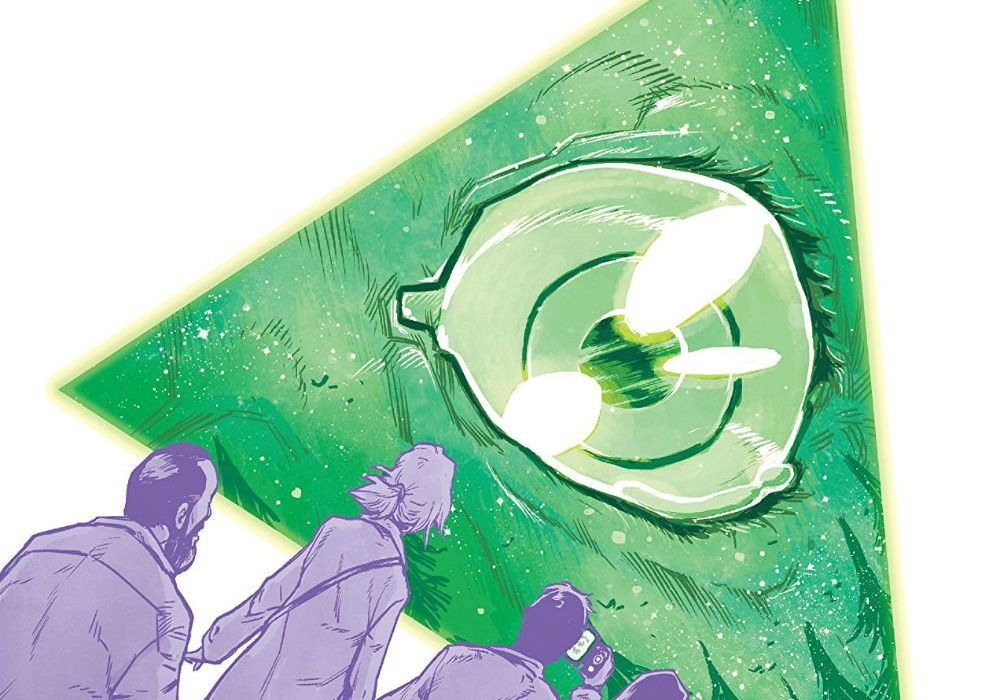 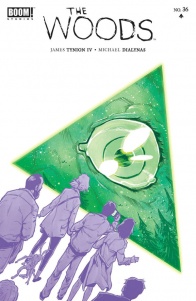 Series finale! The students of Bay Point Preparatory High School spend their final days in the forests of the alien moon.

Well, here we are. Thirty-six issues and three and a half years later, James Tynion IV and Michael Dialynas’s sci-fi high school drama has come to its conclusion.

We end where we began, the site of Bay Point Prep, only now, the children have come a long way. They are no longer the lost high-schoolers that were hesitant to leave the safety of their only tie to Earth in order to venture into the unknown of the alien moon. They are now battle weary, having been forced to suffer loss after loss, and are now unsure of what comes next. How will they reintegrate into the society they left? Are they all truly safe? Can any of them truly be fine, having seen such horrors?

The horrors of “The Woods” is really where this issue focuses on. The series as a whole has been unrelenting throughout its entire run, willing to destroy its characters in the hopes that they will rebuild themselves, be rebuilt by others, or be crushed underfoot. This issue provides the culmination of all that but I wouldn’t go so far as to say that we’ve wrapped everything up neatly. There are parts of this issue that feel like they should have occurred last issue or at least have been condensed so that we could get a larger denouement than we get at the end.

Where I noticed this the most was the Karen/Sander battle with the computer. It’s a triumphant moment, with Isaac smiling for the first time in a long, long while, as he obliterates the computer’s code with Adrian, but one that is also filled with pain, which Sander willingly shares with Karen. As a scene, it’s powerful and, unfortunately, couldn’t have occurred at any other point in the narrative. It has to occur after Ben’s final act of letting go of Isaac and after that last, final battle with the moon’s fauna, which Dialynas renders beautifully in two, two-page spreads. But it feels repetitive.

We’ve seen the characters have this conversation before, multiple times, and it just wraps up too neatly, too quickly. Yet, on the other hand, it gives us the final character resolution for Adrian and Isaac. Isaac -now no longer naked, no longer looking gangly and ruinous, his hair combed, cut, and clean – is finally at peace and Adrian, no longer the gigantic tool bag he used to be, is finally kind to Isaac and Karen. He is no longer that snobbish, impossibly self-centered boy who thought he knew what was best for the school. We see this best when he rejects Karen’s offer to make sure that people knew what he had done for everyone.

His own ego isn’t important, the lives of those they saved are. What makes this moment even more powerful is Dialynas’s art. He really pushes the faces this month (especially with Karen), driving home just how much pain and grief these characters are feeling. Karen constantly crying blood and the devastation that is on her face when she and Sander are whisked away from the planet contrasted with Adrian’s somber yet hopeful goodbye was beautiful. Karen wasn’t ready to say goodbye to her friends again. The last friend she lost sent her into a depressive spiral and now that she is finally back, she’s got to lose another two.

It’s interesting to note that, from the defeat of computer up until Karen and Sander are forcefully ejected from the moon’s programming, each page is divided up into four page-wide panels (except for the page with the lightening flash which combines the bottom two into one, slightly larger panel). It unties the events visually, giving it a pacing that slows the action down and allowing figures to stay centered upon the page.

It makes Ben’s final page, with him carrying Isaac’s now lifeless body into the white light that has bathed that section of the moon, all the more powerful and somber. Ben is framed starting just left of center crying, before wiping away his tears, kissing Isaac on the forehead farewell, and then walking off. He does not move and our eyes follow him down the page, him getting smaller and smaller, an inverted pyramid of action forming, isolating the moment.

That was heavy, I know, but that’s what this issue, and this series, is (or, I guess now, was). All the characters at the start of this issue are broken and weary, especially Isaac, who’s emaciated, manic look only makes his pleading for death all the more tragic. Dialynas contrasts this with the softness of post-death Isaac and Adrian as well as Karen and Sander once they are back on Earth.

There is a lot to love about this issue and this series in general but I still have some qualms about the pacing of this ending and the overall story. There are many questions that are left unanswered or unsatisfyingly answered. The origin of the moon was one of those unsatisfactory answers. We still know very little about why this death moon came about, beyond a vague explanation about a test and then the death of that civilization.

But the bigger issue I have is that while the final page is beautiful and hopeful, it doesn’t ring true with the setup of the previous couple arcs. At the start of year three, we jumped back to Earth and got to see what had been going on there in the years since the disappearance as well as get some much deserved character development for the parents.

It’s all building to the students, and all the others, finally going home and the two storylines crossing over, giving us a denouement to the story.

Yet it ends with the conclusion to the moon story but no conclusion to the Earth story nor do we get the reunion in full. We don’t get to see the characters, who have each grown on their own, interact once the danger is finally over and I think that’s a great shame. It’s why last time I could not believe that we were in the penultimate issue. It felt like we still had another couple of issues worth of material to get through and instead that got cut for the sake of a regular sized issue. Those questions I posed earlier are not answered but maybe they don’t need to be.

We get closure on the arcs of all of the main characters and, by the end, they have finally saved themselves from the moon’s death traps. While there is more to go and more of the story that I would love to see, we are left at a point where we can imagine it well enough. The fact that I care so much about these characters that I don’t want to let them go, that I want to know what happens next, is a testament to the well-crafted story and people that Tynion and Dialynas have made.

“The Woods” is a bittersweet tale of mystery, woe and growth. It opened on death and horror and now ends in death and tears…and hope.