“The Chair” is a dark and choppy comic about a man on death row. It’s exciting to read, and after reading its fiendishly tight ending, you’re practically invited you to flip back to page one and start again, looking for all the hints and subtext. Unfortunately depth isn’t this comic’s strong point, and the more you read it, the more it falls apart. 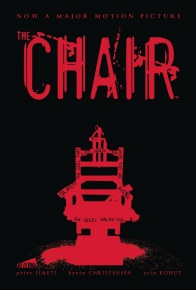 This book is split into two distinct parts. The first part is a twisted story about an innocent man living in an amalgamated nightmare of American prison. It’s bleak, dark, and features whole pages swept with blackness. The second part drops into view at the end of the second act. Here the script is flipped, and “The Chair” becomes about a guilty man in a sane and brightly lit prison, but somehow that truth isn’t much better.

“The Chair” was originally serialized in four parts, and each part opens with a famous quote. If I tell you there’s a quote from Nietzsche in here, you can definitely guess which one it is. The quotes chosen are some of the most overused quotes in the world, are often found littered through high school essays. Even worse, they’re meaningless enough in context of the comic that they could have easily been swapped randomly with no loss to the story.

There is a lot to recommend in this comic, but “illusion of depth” is an unfortunate theme that runs through it all. In the dark first part of the comic, our protagonist, Sullivan, is living alongside “fuckers [who] are nowhere near innocent,” and lists the usual assortment of, “Murders. Rapists. Child killers. Terrorists. Serial killers.” We later learn that Sullivan is actually guilty of four out of five of those are crimes, and that all the problems in the prison were part of Sullivan’s psychosis. It’s an easy stretch for any reader to want to go back read the entire first half as a journey through Sullivan’s subconscious mind, and that each criminal character was actually a facet of himself. But you can’t. At one point we see a flashback to Sullivan’s deployment in Vietnam, and it’s just a shallow stereotype of an evil soldier. There’s an inability to read deeper into this comic that is frustrating as hell.

Peter Simeti did all the work on “The Chair” except the pencils, which were done by Kevin Christensen. This is split of artistic duties that I don’t see much. I wonder if Simeti wanted to be the sole artist on this comic, but didn’t have the artistic chops to pull off the main art responsibilities? The result is a bit strange. This book rides strongly on its writing, and in most of the scenes the actual art is just there to set a mood.

The character designs are top notch. The two characters that matter most, the brothers, Richie and Tommy, are clearly related, both in facial structure and in how Tommy’s devilish hair is a match for Tommy’s devil-like beard. “The Chair” features a lot of anger and despair, and artist Kevin Christensen has absolutely mastered those two facial expressions. A lesser artist would have been reduced to a simple superhero grimace, not the hundred different variations that Christensen draws here.

It’s not all a misstep. In the second chapter there are panels with words flying in from offscreen, forming walls, aggressively calling the characters and reader forward. But this, too, would have been more effective with Will Eisner-esque lettering built into the artwork, instead of a blocky font with a Photoshop effects.

The lack of thought put into the story and some of the art is why this comic is hard to reread. It’s not really about prison, because none of the very real problems in American prisons are touched on here. It’s not really about insanity, because Sullivan’s insanity is swept aside as some thoughtless combination of schizophrenia and MPD. It tries to concern itself with the nature of evil, but it’s a bit trite and worn.

Ultimately, “The Chair” doesn’t provide any insights on the nature of insanity or the evil that men do, but it still has enough just style and just enough story to keep me satisfied.

Despite all my gripes of how this comic could have been improved, it’s an effective little story. I’m not surprised it has been reprinted in a couple collections, or that it has been made into a movie. Underneath a lot of mistakes is a fairly unambiguous story about an evil man facing the death penalty, a peek into his mind, and how he ultimately both fulfills and escapes his fate. I just wish it had more depth.