As Nocenti and McCarthy reach the conclusion of their first run, the Witch Boy may have bitten off (and swallowed) more than he can chew. 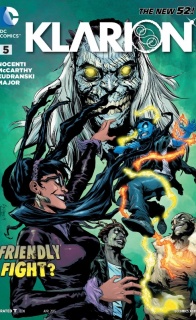 Coal’s buddybots are making people happy, happier than they’ve ever been before. So why is Klarion on a mission to destroy all buddybots?

The first arc of Klarion’s reintroduction to the DC universe has been somewhat of a whirlwind ride so far. Stepping away from the expositional refits that many of the more well-known characters were subject to, “Klarion”‘s creative team opted to go for a helter skelter first few issues that through our prodigious young protagonist across dimensions and let him get on with it. The first couple of issues sparkled with promise and enough dazzling visuals to hook in all but the most reserved of reader but, as we continue to delve into the neo-pagan world of technology and magic that Nocenti and McCarthy have constructed, there is a lack of focus that may become detrimental to the book’s longevity.

Klarion’s coven is coming apart at the seams. Rasp, hooked on his new girlfriend-bot, has anchored himself at the Necropolitan. Zell, her own buddy-bot in tow, has followed Klarion into his own pocket dimension. And Klarion, at the advice of the silver-tongued Beelzebub, has ingested a suped up version of the same tech he’s trying to destroy. Issue four left us with a lot of loose ends to tidy up but, even as issue five comes to a close, it’s not exactly clear which strand Nocenti wants us to focus on most of all.

The most pressing issue at the moment seems to be Coal and the Necrots, who Klarion must stop at all costs before their buddy bots become as numerous as Sonny and his ilk in I, Robot. People have already begun to incorporate them into their lives and they seem to have made everyone’s world a lot nicer so far. While a 21st century audience is well aware that artificial intelligence is (by literary precedent if nothing else) inherently flawed and evil, Nocenti hasn’t really given us much of a concrete goal in terms of Coal’s plans. Even in this latest issue as he ruminates on the stages still to come his dialogue is vague and murky, equating to nothing much more focussed than ‘sell buddy-bots, maintain market share, …, profit?!’

The secondary, and much more intriguing, longform plot is the alignment of our pint-sized protagonist. Issue five sees Noah, Piper, and Beelzebub finally lock horns over Klarion’s future, each arguing that he has a great part to play in the future of the world. Whether it’s on the side of good or evil remains to be seen, but Klarion’s inability to commit is second only to Hamlet’s, and his contrary obsession with no-one having control over his destiny but himself means that I’m far more interested in which side he finally decides to fall onto than the super-powered turf war that’s currently taking the spotlight between technology and magic.

As noted in previous reviews, the big draw for me as far as this comic book is concerned is still McCarthy’s art, and he continues to serve up beautifully realised spreads that tread a teetering line between sequential storytelling and straight up art. McCarthy’s paneling is brilliantly nuanced. straight-forward enough when characters are simply talking, it flares up as the narrative starts getting mystical, warping and dissolving the barriers between individual panels until the bleed together. A few of the double page spreads that he’s laid out in this issue are my favourites of the series to date, and he manages to achieve his highly stylised variation on the standard comic book layout without ever sacrificing coherence. Every page flows so confidently that you’re never left wondering which panel comes next and McCarthy’s ability to isolate the most relevant elements of each panel means that, even on his busier pages, not an inch of space is wasted.

There are still many parts of Klarion’s world I’m very intrigued by. The coven itself, Piper and Noah’s allegiance and involvement with S.H.A.D.E, and the extent of Klarion’s powers, to name but a few, but I feel as though, five issues in, the series is raising far more questions than it has allowed itself time to answer. Nocenti’s frantic and racing style of storytelling is exactly the kind of thing I like to read but it doesn’t lend itself well to a multifaceted storyline. When you’ve got so much going on there needs to be a distinct hierarchy in terms of the stories being told and it seems as though Nocenti has spent so much time imagining a full and complete world that she has ignored the pacing requirements that are part and parcel of such intricate storytelling.

This lack of focus isn’t helped by McCarthy’s obvious preference towards more expressive, and less sequential page layouts. while his work is undeniably beautiful, the fact that he often insists on using a whole page (or often two) to show us one moment in time from multiple different perspectives, coupled with his use of decompression to enhance certain key scenes means that each issue only covers a very limited amount of time. All of this means that, while a lot of different elements of Klarion’s world feel like they’ve been set up or touched upon, it still doesn’t seem as though we’ve had a chance to explore anything fully as of yet.

There is still a lot that plays in this book’s favour as far as I’m concerned. Nocenti’s scripting is often sharp, playful, and full of character, especially when it comes to the enigmatic figure of Klarion. McCarthy is putting out consistently mind-boggling work that makes each turn of the page a revelation of sorts, and the two work together to supply one of the most unique offerings available from DC at the moment. But it is still a little rough around the edges and I’m not sure if they’ve cracked the formula just yet. While it feels in spirit a little like Vertigo for the pre-teen demographic, there are still some pacing issues that need to be sorted out before Klarion is ready to join the big leagues.

Final Verdict: 6.9 – Shaky in places but wicked, weird, and full of fun. I’m sad not to see Klarion’s name on DC’s latest list of changes. this might be the end of the line for the little hellraiser.