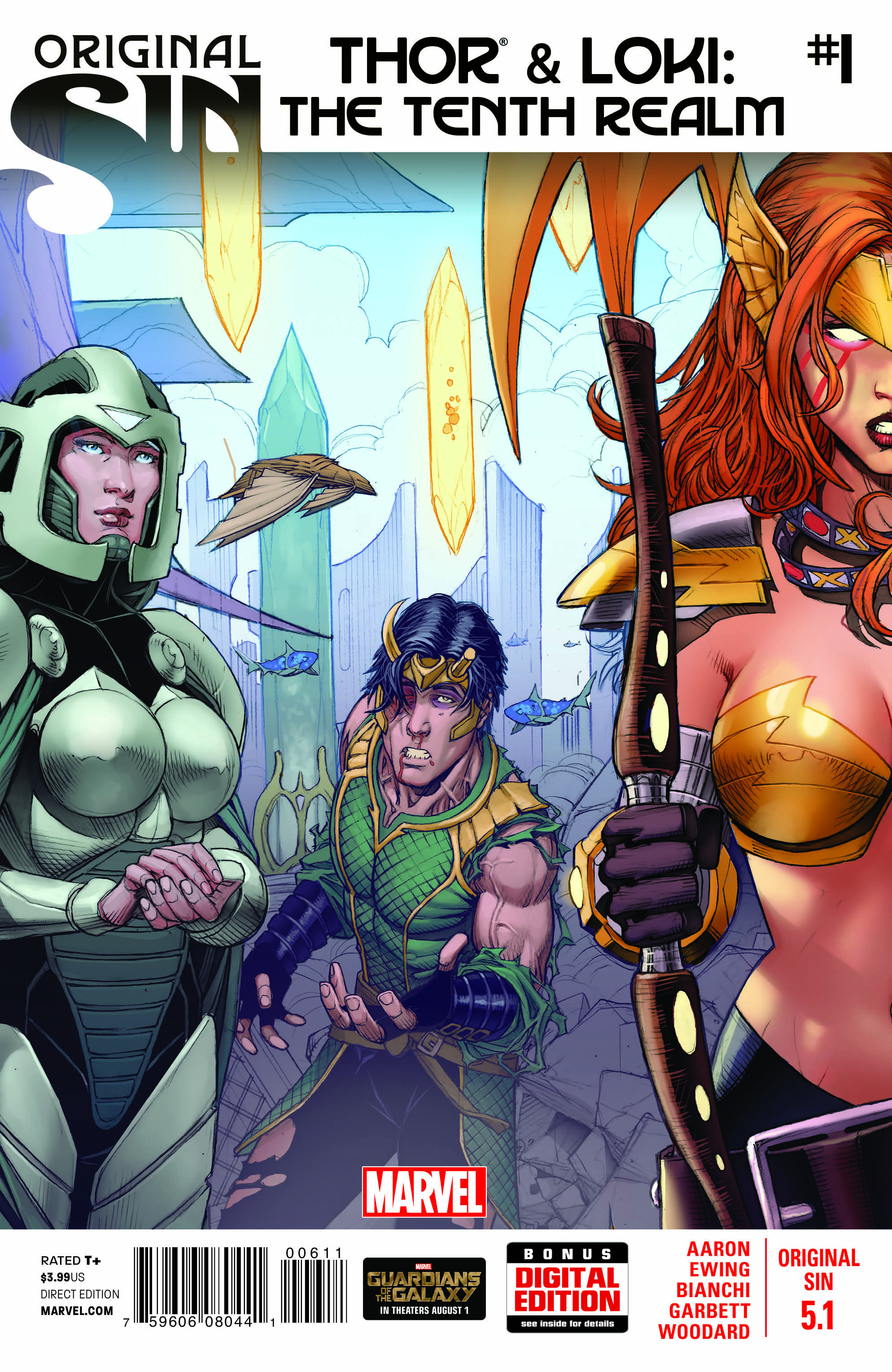 Spinning out of the events of “Original Sin”, Thor and his brother Loki are about to go on a inter-dimensional quest that will also double as the world’s strangest episode of Maury when they finally meet their sister Angela in “Thor & Loki: The Tenth Realm” #1. 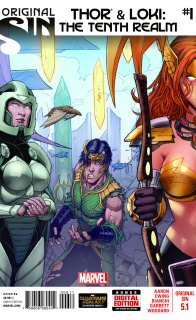 This July, discover the startling secret that Original Sin will uproot for the worlds of Earth and Asgard alike! Today, Marvel is pleased to present your first look at Thor & Loki: The Tenth Realm #1 – the first issue in a game-changing limited series spinning directly out of Original Sin! From the blockbuster creative team of Jason Aaron, Al Ewing, Simone Bianchi and Lee Garbett comes the answers you’ve been waiting for!

The information the Watcher kept has revealed a long forgotten secret Odin wished would stay buried from Thor & Loki, two gods Odin raised as sons. But Odin had a secret. A daughter unknown until now, and the mystery of her arrival will unlock the secret behind the banishment of an entire realm!

The long forgotten Tenth Realm has returned, and with it comes Angela – the lost daughter of Asgard! And her quest for revenge will cut a bloody swath through Asgard like no other!

The sins of the father will be visited upon the children as Angela prepares for war! What is the secret of the Tenth Realm’s banishment? And where has it been all this time? Find out as the sins of Asgard and Odin are unleashed this July in Thor & Loki: The Tenth Realm #1!

Wow, that’s a long solicit. Pretty fitting since Marvel’s been pushing this “Original Sin” tie-in more than any other. To be fair, the revelation bestowed to Thor upon The Watcher’s death, that there is meant to be a tenth realm on Yggdrasil the World Tree and his sister is none other than Guardians of the Galaxy member Angela, probably holds more stakes than everyone else’s secrets. Nova’s dad was a jerk? Welcome to the club, hero. Captain America and Iron Man are having relationship problems? Take it to Tumblr! There’s someone else walking around with spider powers? 2001 called! It wanted to remind you that Ezekiel was a goddamn nerd!

Like a surprising number of “Original Sin” tie-ins, the high-stakes secret that propels “Tenth Realm” doesn’t really feel forced. Though I haven’t been keeping up with “God of Thunder”, I know the events of “Tenth Realm” have been built up to some extent in “Agent of Asgard”, especially since they heavily reference said foreshadowing there which leads to the twists and turns found in this issue to not feel completely out of nowhere. Honestly, the issue feels like just another issue of “Agent of Asgard” rather than a big tent-pole event that Marvel forced all the creators into.

In fact, if not for the “Original Sin” banner on top and the fact that we’re not getting “AoA” or “GoT” for a couple months (wow, those are some unfortunate acronyms), I may not have even noticed.

While Ewing and Aaron co-plotted the story, Ewing’s got the script and finds a nice balance between the epic mythology “God of Thunder” has with the snark that’s been so prevalent in Loki’s series. Since both titles are on hiatus while this “Original Sin” ordeal sorts itself out, it’d be easy to say “Tenth Realm” serves as a replacement for both, but that’s not entirely true. I mean, yes, this has both titles’ creators, characters and catch phrases, but “Tenth Realm” doesn’t have the large-scale epic events like “GoT” did or the constant stream of snark “AoA” did. Instead, Ewing’s point of view strays from Loki to Thor who is dedicated to solving what happened to his sister and the tenth realm.

It’d probably be a compelling mystery too. Y’know, if the answer wasn’t resolved a month or three in advance.

Seeing Thor fight his way through the deception that his parents told him regarding his sister and an entirely new realm could be wildly compelling if it wasn’t so easily resolved. Even if you did avoid the internet in the lead-up to this comic – in which case thank you, caveman, for making this the first web page you ever read – Angela’s identity as the Odinsdotter is made abundantly clear from the opening scenes of the comic and the cover itself. Having Thor’s plot revolve around him blustering into rooms and demanding answers for stuff we already know would be anticlimactic enough, but we don’t even really have much to build up to these moments with. Hel, the mystery of whatever happened to the tenth realm is introduced and solved in around ten pages.

If Thor’s plot feels devoid of direction, then Loki seems to be the most likely to add some direction to this book — but he doesn’t receive nearly enough screen time in this issue. He and Thor get to share some bro time, recap the recent developments of “Agent of Asgard” and feature my favorite running gag in the history of Loki’s canon, but aside from that Loki and even Old Loki don’t do much but say menacing things about the next four issues. This is a dead shame since these scenes with Loki are the spare humorous moments in what is a Very Serious Event™ (except for Luke Cage’s golden cameo/tie-in to “Mighty Avengers). With Ewing’s shift in focus, we lose a lot of the humor that makes “AoA” so fun to read.

That said, it’s not like Lee Garbett’s pulling back any punches. I’d put down money on the fact that Garbett’s one of the better “character” artists right now. He’s proven to be hilarious in “AoA”, taking already funny scenes and turning each one into my own “reaction faces” folder.  That’s not really an indication of Garbett as a “funny” artist but more one that’s skilled in conveying characters’ emotions, which is handily evident with all the angst going on in “Tenth Realm”. Even though it might’ve been shoved down our throats by Marvel for months, the events in this issue are still realm-shattering for all involved. Plus, one battle scene defines the type of threat our heroes might face when they uncover the tenth realm through a conflict with great scale and even greater brutality. Throw in some other grand scenes like Thors’ goats or Old Loki gloating over whatever his plan is and we’ve got a tie-in that definitely feels like the type of blockbuster that justifies its own title.

Also, while Bianchi only gets two pages in this issue, he knocks them out of the park. By having his gritty painting-like art burst in through Garbett’s more traditional style, we’re given an example of just how exotic and different the tenth realm itself is going to be. I’m always down with seeing more Bianchi, but the few smartly placed pages he has here are breathtaking.

Overall, I wouldn’t say “Thor and Loki: The Tenth Realm” is a bad comic, but I wouldn’t say it’s a good first issue. Sure, the plot with Angela and The Tenth Realm got outright spoiled for the entire world and seemed to be an integral part of the marketing so it’s hardly the fault of the creators. What they bring to these pages is very good, but without the mystery of Thor’s sister or the tenth realm it all just feels directionless. It’s the type of “first issue blues” that afflicts heavily promoted and spoiled event comics like this one. When we get past the stuff we already know and venture into unknown territory, “The Tenth Realm” has the potential to be an incredibly intriguing book. For now though, it’s a wonderfully illustrated and well-written story that’s been told to us through blatant covers, explicit titles, and press releases.

Final Verdict: 6.3 – I’m still going to check out the rest of this series because I heavily doubt this issue is an indication of what’s in store for the entire series. Once we get past the boilerplate content that’s already been made plain to readers, I think we’re going to get some intriguing stuff out of this title.