“All in all you’re just another brick in the wall.” These lyrics from Pink Floyd’s “Another Brick in the Wall Part 2” came to mind when I was reading “Thumbs” #2. Why? Because in this issue of “Thumbs,” Sean Lewis explores the role kids play in the world. Are they just disposable? Are kids only destined to be used by the various institutions of society? From what we see in “Thumbs” #2, kids are indeed expendable in the world of “Thumbs.” Some are even left to their own devices. Lewis really seems to be channeling all the chaos going on in the real world in “Thumbs” #2. This results in a comic that is very immersive for the reader. “Thumbs” #2 is relatable. You really feel for our protagonist, Thumbs, because he’s essentially a soldier in a war that isn’t his. He wasn’t asked for his opinion, he’s just simply thrown into a conflict that was started by a previous generation. All of this is very clever from Lewis. 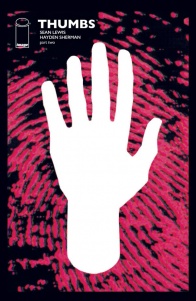 Thumbs is out of his coma and back in the world. Trapped by the Power, he sees the junkies who’ve taken technology underground, the revolutionaries who deliver devices to the people, and the government that’s banned it all.

Lewis isn’t the only creator involved with “Thumbs” #2 who is clever. Hayden Sherman’s art brings the world of “Thumbs” alive. His artistic style creates this eerie, dystopian feeling, but nonetheless paints a beautiful world amongst the rubble. Sherman takes us down tunnels, alleyways of a fallen city, and lost highways. In “Thumbs” #2 we’re shown more of the world. And like any good dystopian sci-fi world, the world presented by Sherman’s art feels lived in.

Sherman’s style is very sketchy and raw. Contrasted by neon pink colors, Sherman’s art shows us the detailed, unhinged world of “Thumbs.” The contrast isn’t just for show either. The art on the page has substance to what’s going on in the story. The sharp, neon pink colors of the digital, wired world strikingly contrast the dark, drab colors of the new analog world. This communicates just how different the opposing worlds are. Thanks to the contrast, the reader is never left guessing who is on what side. All the action scenes flow very well too and it’s never unclear what’s going on in the story. The colors on the page, the neon pink text box and sounds, and just Sherman’s untethered art style in “Thumbs” #2 all combine to make one ascetically pleasing comic. A broken down abandoned trailer park has never looked better.

The dynamic viewpoint of each panel in “Thumbs” #2 makes for an interesting insight into the world too. We’re shown so much because of this. For example, one moment we see our hero climbing out of a sewer about to be attacked but once the battle starts we’re transitioned to the next page looking at the battle from the aerial view. All of this adds a new, exciting experience for the reader that isn’t jarring. Plus the different angles gives a very “Big Brother is watching you” vibe to the comic. Every aspect of the art in “Thumbs” #2 feels deliberate, giving us important messages that need to be dissected. The new analog society’s teachings revealed towards the end of the story seems to be very Orwellian in nature too since the school declares that if a citizen shows a sense of individuality, they are selfish. Lewis’s words and Sherman’s art gel very well together in showing us the messed up world of “Thumbs” #2.

The story continues directly from the first issue’s cliffhanger and gives the reader more insight into the world of “Thumbs.” Lewis also does a good job of giving the reader plot points bit by bit. We’re shown glimpses of what the overarching story of “Thumbs” will be about later on. You’re never left feeling overwhelmed by the changing world around Thumbs either. Lewis never over-explains the world of “Thumbs” in “Thumbs” #2. The frame of reference we’re given is through, Thumbs, who’s been in a coma, for many years, so we’re exploring the changed dystopian world for the first time just like the protagonist is. “Mother,” the large looming AI, explaining to Thumbs what happened to the world is a good storytelling technique too. It’s also clear what Thumb’s personal objective is, which helps with the story not feeling bogged down by world building. Following a character like Thumbs makes the comic feel grounded because though it may not be 100% clear what the two opposing sides of this world want, it’s always clear through the writing in “Thumbs” #2 what Thumbs wants to accomplish.

All in all, “Thumbs” #2 is a great comic. It has all the elements of a good dystopian, science fiction story and then some. “Thumbs” #2 is a hefty comic too giving the reader a good chunk of story and Sherman’s art alone is worth the price of this comic book.

Final Verdict: 9.0 “Thumbs” #2 is an eerie, yet beautiful comic book that has something to say about humanity and growing up.