As the current “Star Wars” comics begin to flesh out events set during and after The Empire Strikes Back, they are starting to take the time to give us a more in depth look at the Galactic Civil War from both sides. “TIE Fighter” #1 begins a five issue miniseries focusing on the human side of those fighting for the Empire; hoping to show readers that there is more to the ‘baddies’ in this galaxy far, far away than just Sith Lords, mustache twirling politicians, and bounty hunters. Some Spoilers Ahead. 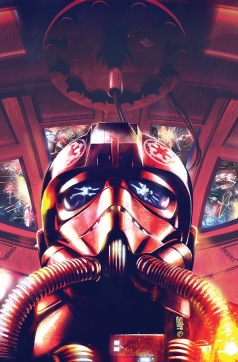 ‘The Shadow Falls’ on the Rebel Alliance. After the devastating loss at the Battle of Hoth, the Rebels are on the run, the Imperials are feeling incredibly powerful for the first time since the destruction of the Death Star, and the elite Squadron 5 of TIE Fighter pilots – known as Shadow Wing, is looking to bring glory to the Empire by destroying rebel scum.

“TIE Fighter” #1 throws readers right into fantastic space battle action as Shadow Wing decimates a squad of Rebel pilots in deep space. Moving quickly from the brutal deaths of these unknown pilots, the story jumps to the Star Destroyer: Pursuer, where the Shadow Wing pilots call home. Called in by their colonel for a priority classified mission, it is at this point that we get a good look at these heroes of the Empire prior to their departure.

Writer Jody Houser’s goal is to give us characters that fight on the side of evil that we can relate to. It has been attempted before in previous Star Wars stories, but more often than not we are handed characters, who are employed by or enlisted in the Empire, that live in a gray area. Neither pure of heart heroes, or horrible and sadistic villains, they are mostly fighting for themselves, with no greater motives or ideals at play. This leads them to not be as deep as they could be and they end up falling on one side of the line or the other out their best interests.

Although we are only just meeting the five characters in Shadow Wing there is already a sense that these characters are fairly well fleshed out. Whether they are completely attached to the Empire’s way or life, or are intelligent enough to question some of the aspects of their lives, each pilot truly feels like a separate character with their own personality. Houser also fills out their little world nicely. Seeing some of their day to day routines and other characters that inhabit those routines is a nice touch.

With five lead characters there is also the variety of reasons why they are enlisted as Imperial pilots. Those answers have not been earned yet, and rightly so, but it is clear that they will play an important role in this miniseries. And because we learn in-story that this squad has not been together very long, they are learning about each other at nearly the same pace we are. For now, it looks like these characters will unfortunately fall into long used tropes: Jeela – the solemn, career minded leader, Lyttan – the ‘this is war, but I’m still having fun’ flyboy, Zin – the serious, yet thoughtful hero/friend, Ganem – the open-minded questioner, and Broosh – the ‘I’m dark, mysterious, and probably hiding something’ lieutenant. These are fun characters to play with, especially in a war setting, but hopefully they will have a little more to them than what we always get.

One character who only graces a few panels, but has a huge impact on the story and how characters and Imperial indoctrination is touched is their Colonel, Nuress aka Grandmother. An old veteran of the Clone Wars, her view of the Empire is still very much the same as it was for the Republic. Seeing the Rebels as nothing more than citizens looking to leave the Empire, even calling them Separatists, as if the cause and people are exactly the same as they were during the Clone Wars. It is almost treated like a throwaway line, but with Ganem referencing it later, it proves that these details carry weight in this story. Whether you are a fan of the prequel trilogy or not, there is no denying that those movies helped expand the Star Wars universe in some truly great ways and including details attached to that era allows the stories set during the original trilogy years to feel attached to the greater story. With the myriad stories fans have gotten in the last forty plus years, it can feel redundant and unnecessary to claim that more depth or fleshing out is needed. However, if you are going to continue to produce new stories in any franchise that inter-connectivity is a tool that, when used in a properly subtle manner, will only help boost the quality of those new stories. Houser nails that in this issue with every character at her disposal.

The writing is done well, the pacing is nice, if not a little choppy, but throughout, this issue is an extremely enjoyable. Houser is a pro at “Star Wars.” If I had to crack down on any aspects of writing and plot, it would be the seemingly over-used character tropes, and one that is included towards the end – one of our heroes is possibly also working with the Rebels. Here’s hoping this possible double agent is used in a fresh and interesting way. And the fact that the plot is chopped and looped around in a Tarantino-like way. It serves a greater purpose, but comes off as a little confusing during a first time read through.

Along with a solid opening narrative, this is a great looking book. The pencil work by Antonio and Dowling is very nice and beautifully detailed in a way that gives the ships and characters enough depth and life while living in the more ‘space fantasy’ side of “Star Wars.” The space battles, ships and interiors are top-notch. The character designs, while competent and fitting well within this universe, aren’t anything that grab you. As we are inside the xenophobic Empire, all we’ve seen are mildly attractive young human adults; no aliens or bizarre creatures yet. And the sanitized, geometrical interiors of Imperial ships are easy to pass over. I want these Imperials to get into the muck and grime of a backwater planet, but for now this style suits the book just fine. Prianto and Loughridge do an outstanding job of coloring in these panels. Keeping to the fantastical detailing of the drawings, these pages look hand painted. It’s gorgeous work that will grab you from the first page.

Fans will definitely enjoy this premiere issue. Those who were into learning more about Rogue Squadron or Black Squadron over the years and have wanted to see a similar dynamic from the other side of the war will find something to like here. And those of us old enough to remember 1994’s Star Wars: TIE Fighter video game will feel the pangs of nostalgia as soon as you open the issue. Set during the exact same time as the game, it is safe to assume that there may be some connection. I’ll be keeping an eye out from Thrawn.

Final Verdict: 8.5, A “Star Wars” adventure that is attempting to flip the script on who we are rooting for. Well crafted writing and artwork make from a solid foundation in this war story.