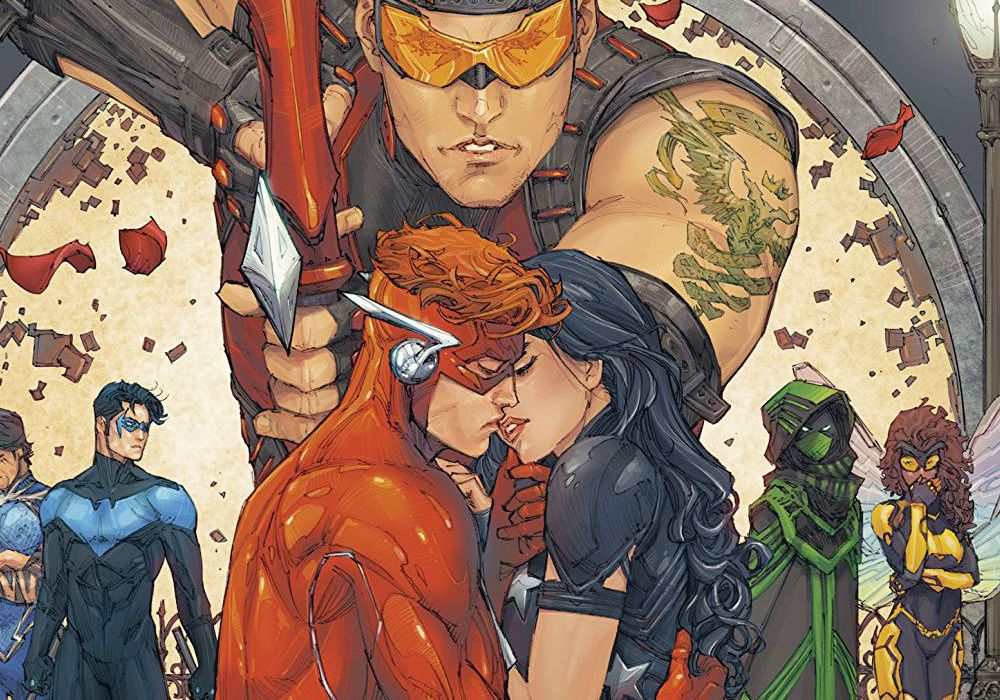 There’s a traitor among the team. Has the traitor been found? Let’s find out. 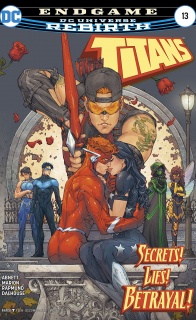 “JUDAS AMONG US”! As Omen begins her investigation into the identity of the team’s traitor, the Titans launch a full assault on H.I.V.E., who they believe hold the key to restoring Bumblebee’s broken mind. Meanwhile, tensions rise when Roy discovers Wally and Donna’s blossoming romance—which threatens to tear the Titans apart!

“Titans” is an odd book for me. It feels like the book with the biggest promise of what “Rebirth” promised to do, warts and all. It brought back a sense of history and recognizable characters, but only to a certain degree, with events and characterizations still feeling off, with chunks still missing from them. The elder Titans team (which, is still odd, marketing-wise, that we have a “Titans” and “Teen Titans” book) have been going after H.I.V.E. in search of an engram containing Karen Malcolm -Bumblebee-’s memories. Another plotline coming to head is that, in a vision she received when mentally interrogating Psimon, Lilith Clay -Omen- is searching for a traitor on the team. The latter plotline comes to a head here, but is it any good?

Before we get into the book itself, let’s talk about the cover. Kenneth Rocafort has been an artist that has improved from when DC first really got a look at him back in the “Oh Dear Lord Where is Starfire’s Spine?!” days of “Red Hood & the Outlaws”. I am a sucker for symmetry, so the placement of the cast on this cover is enjoyable to me even if the image is of Roy trying to commit horrid murder of his two comrades. This is a well crafted image, but let’s talk about perhaps the aspect that Rocafort took the most time in crafting: Wally’s butt. Something else I am into is fanservice not aimed at heterosexual males and that is something of beauty, a rival to his best friend Dick’s memetic gluts. It catches the eye, perhaps even more so than the other main focus of the cover.

But now on to the issue as a whole, taking place as the team infiltrating the H.I.V.E. base hopefully containing Bumblebee’s memory engram (which they will no doubt take to the Cryptarch and only get green mem- oh God! I made a Destiny reference in this review!) and encounter Mr. Binder, who activates the “Endgame Protocols” to utilize the powers that H.I.V.E. have collected from dozens of metahumans. It reminds of of the H.A.R.D. Corps of “Harbinger” fame, with Binder having the base’s A.I. slotting in new powers as he requires, so the team as a whole have to think on their feet to try and get around him, Wally in particular, what with the heart condition he was literally retconned into during “The Lazarus Contract”.

Unfortunately, Binder’s techniques and how Wally counteracts them are the biggest highlights of this issue. The big problem with a great deal of the nit and grit of this issue is that it all feels very second verse, same as the first. The plot and the melodrama sprinkled in has been done before. The “romance” between Garth and Lilith feels very tacked on and lacking and the love triangle between Roy, Donna and Wally is just as bad. It feels so lifeless, going through the motions and stagnant. Sure, we have these characters all back together, but the book feels so overreliant on the old without pushing them forward. To compare it to another team book, “Detective Comics” is a team composed of 90s and 00s Bat characters maligned in the New 52, but it still feels like there’s an attempt to move them forward.

V. Ken Marion joins the regular inker Norm Rapmund and colorist Andrew Dalhouse on this book in place of the series regular Brett Booth and I have to say, if I had to compare between Booth and Marion, I prefer Marion’s work. While their styles are similar, Marion’s work is a bit more clean, doesn’t go overboard with detail. Movement flows without the work becoming a mess. That said, he shares some flaws with the main artist, in particular the faces. This may be a weird thing to focus on, but Dick Grayson’s chin was weirding me out. It was so perfectly square. It was a bit disturbing. Other faces felt off, like they knew what emotions were, but weren’t 100% sure how to properly express them.

“Titans” is not a bad book and this wasn’t a bad issue. It wasn’t a good issue though by any stretch of the word. It was perfectly textbook “Titans”. The plot, the dynamics, the melodrama. It all feels very familiar. Which was a goal of “Rebirth”, to bring back some of the familiar. Some arguments can be made not enough was brought back, like their personalities and relationships having to reconstruct. But now thirteen issues in, this is becoming a bit stilted. Even the tweak to Wally’s powers with his heart condition doesn’t feel like enough to garner interest.

Final Verdict: 5.9- A perfectly standard issue of “Titans” that is showing the benefits and detriments of the DC Rebirth initiative.